Lacrosse In The Olympics

Lacrosse on the Olympic Stage
Years ago, lacrosse enjoyed status as full-medal and demonstration sport. 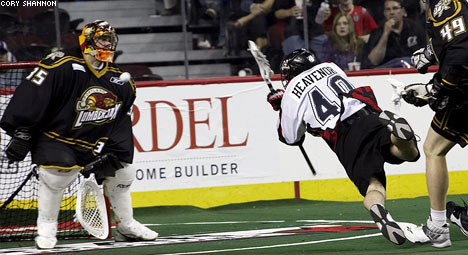 (Note: This story first appeared in the September/October 2004 issue of Lacrosse magazine.)

How many of us must have watched the Olympic Games this summer and asked: Why no lacrosse?

Lacrosse people can appreciate the fact that Olympic staples such as track and field and swimming are bigger sports internationally than lacrosse. But why do the games include competition in such sports as canoe/kayak, roller sports, taekwondo and table tennis?

Why not lacrosse, a sport growing in popularity so rapidly that a national TV audience this year saw crowds of 46,000 at the NCAA championships in Baltimore?

Has lacrosse ever been an Olympic sport? Answer: Yes, but not for a long, long time.

Lacrosse was a full medal sport in the 1904 and 1908 Olympics. Canada won the gold both times. The USA won silver in 1904, the team consisting of players from the St. Louis Amateur Athletic Association.

Lacrosse was played in the 1928 Olympics in Amsterdam and in the ’32 games in Los Angeles. Both times lacrosse was listed as a “demonstration” sport. On both occasions the U.S. was represented by the Johns Hopkins University squad, which had to win an eight-team playoff to qualify.

There aren’t many survivors from those two teams. None of the ’28 players are still with us. From the ’32 team only three are living – Lorne Guild, Caleb Kelly, and a remarkable 91-year-old man in Atlanta named Church Yearley.

Yearley, retired as vice chairman of the First National Bank of Atlanta, is one senior who has never yielded to the common practice of old-timers to embellish long ago accomplishments. Indeed, Church even now won’t accept credit for something that Olympic records give credit for.

A Rice University professor, Clark Haptonstall, who has taught a class there on Olympic history, reports: “In 1932, Johns Hopkins University played a team from Canada in front of 80,000 spectators – which appears to still be a lacrosse record.”

For many years it has been an accepted part of lacrosse legend that the Americans that year played before 80,000. Many have said 100,000 watched lacrosse that year in the then new Los Angeles Coliseum.

Technically, the report is correct, but Church Yearley scoffs at that.

“Oh, that’s an anomaly,” he said one day this summer. “There were 80,000 people in the stands, all right, but they were there for the marathon. The marathon was about to finish the same afternoon in the same stadium, and the crowd was there to see that. And there we were out on the field, playing lacrosse against Canada.”

If anyone over the years has gotten the idea that the ’32 U.S. Olympic lacrosse team was invincible, Yearley puts it a little more modestly: “Canada was the only other team there. We played three games with them. We won the first and third, lost the second.”

“Jack Turnbull pulled us out,” Church says. “He was our captain and leader and he was the one we turned to when we needed it.”

Turnbull, who died as a World War II bomber pilot, was a first-team All-America attackman along with Don Kelly. Kelly, a versatile three-sport star (football, basketball and lacrosse), is generally considered the best athlete ever at Hopkins.

Defensive stars of that ’32 team were Yearley and Pete Reynolds (who had played no lacrosse prior to college). First-team All-America midfielders were Lorne Guild, Millard Lang and George Packard. Hen Beeler and Caleb Kelly were stalwarts. The goalie was speedster Fritz Stude.

It is also a frequently mentioned part of lacrosse lore that the color announcer at the ’32 Olympics was Will Rogers, who at the time was the biggest star in show business.

“Will Rogers,” Yearley explains, “was half-Indian, so he had seen lacrosse. He came out to our practice a couple times. The star 100-meter dash man for the U.S. in those Olympics was Eddie Toland, a black man. Our goalie, Fritz Stude, stopped a shot and then came racing upfield, and Will Rogers got a laugh out of the crowd when he said, “I think that’s Eddie Toland in whiteface.”

Some of Yearley’s favorite memories of the Olympic experience involve off-the-field things.

“We went to California by train. It took three days, but we had a good time in the club car. Our coach, Ray Van Orman, was a great conditioner so none of us drank. We went to a party at the home of a Hollywood director who was married to Francis X. Bushman’s daughter. We visited the MGM lot and watched them shoot a scene with Jean Harlow.”

Caleb Kelly, younger brother of Don, is now a retired lawyer living on Maryland’s Eastern Shore. At 93, Caleb is still fit enough that, on the hot July morning when he was phoned for this article, he had just walked a mile to the town of Claiborne to get his mail.

“The crowds we played before in the Olympics are my greatest memory,” he said. “It’s true that when we had 105,000 in the stands the people were there for the marathon, but for the other two games we played I believe there were 50,000 people there. That was impressive.”

Lorne Guild, who turned 93 on March 11, is living at the Broadmead retirement home outside Baltimore. His memories of playing in the ’32 Olympics are similar to those of his old teammates.

“We had a marvelous time,” Lorne said. “We went out on the train. I had an upper berth. It was a lot of fun. Jack Turnbull was the backbone of our team. He was ‘A,’ No. 1, as good as anybody who ever played.”

Caleb Kelly, who officiated for many years, re-wrote the official lacrosse rules. He was head coach at the University of Baltimore in the ’50s. He can’t understand why today’s teams don’t play behind the goal as they used to. His UB team one year scored on 75 per cent of its extra-man opportunities using attackmen behind the goal to run the offense.

Will lacrosse ever be back in the Olympics, since it is far more popular in America now than it ever was?

Four years ago in Sydney, Australia, there were efforts made to stage a lacrosse exhibition at the Olympics. The International Olympic Committee ruled that a lacrosse game be played, but not at any Olympic venue. That was the end of that.

“The requirement to add a sport,” explains Boston’s John Urban, an active member of the committee working on Olympic qualifying for US Lacrosse, “is that, for men, it must be played in 75 countries on four continents, slightly less for women. With an aggressive approach? I’d say it’ll take 15-20 years for us to get there. Once we get to scale, then we’ll have to deal with IOC politics.”

Steve Stenersen, Executive Director of US Lacrosse, the national governing body, and past chair of the International Lacrosse Federation’s Development Committee (now headed by Tom Hayes), is more optimistic than one might expect.

“We have 25 countries playing now, pushing toward 30,” Stenersen says. “Ten years ago, we only had 12 – so we’ve doubled that. If we can double what we have now, we’ll be close.”

Until then, if we want first-hand accounts of what it was like to play lacrosse for the U.S. in the Olympics, we’ll have to rely on the few survivors from that 1932 team.