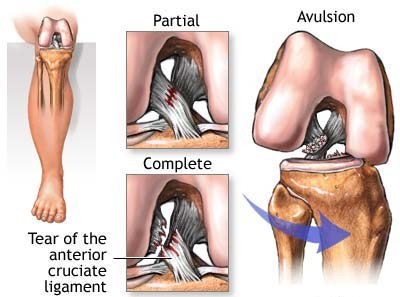 According to information released today at the 2009 Annual Meeting of the American Academy of Orthopaedic Surgeons (AAOS), ACL tears are being seen in younger patients as an increasing number of children and adolescents participate in year-round sports.

“What’s happening is that usually by about age 12, children choose the sport in which they are determined to excel and then participate in that sport year round,” explains Darren L. Johnson, MD, orthopaedic surgeon and director of sports medicine at the University of Kentucky School of Medicine. “Participating without taking time off, playing on multiple teams at one time and at higher competition levels, makes young athletes more susceptible to ACL tears at a younger age.”

The injury is almost twice as common in female athletes compared to males, although the reasons why are still not entirely clear.

When an ACL tears or ruptures, it is a severe injury to the knee. “The real story is that only about 60 to 70 percent of athletes make it back to the same level of playing that they had before,” said Dr. Johnson.

In order to improve those statistics, orthopaedic surgeons are trying to more accurately customize surgery to each individual patient. “We are trying to do a better job at recreating a person’s unique anatomy,” noted Dr. Johnson, “and are actually trying to recreate the ACL that the patient had prior to the injury.”

Most often surgery is necessary to replace the ACL. It is important that athletes give their legs proper time to heal before returning to the sport in which they injured their knee. “This is a year-long recovery, but many young athletes do not understand this,” explains

Dr. Johnson. He often tells his patients to consider golfer Tiger Woods as an example.

Woods injured his ACL and has not returned to the game of golf since June 2008. “The reason you cannot return to playing after just a few months is because you do not have the strength back in your leg and the repaired ligament is not strong enough,” said Dr. Johnson. “Coming back too early is a real problem and puts the athlete at a higher risk for re-injury.”

Dr. Johnson says young athletes need to understand this fact in order to avoid further problems down the road. “Having two ACLs replaced by the time athletes are in high school is not uncommon,” noted Dr. Johnson, “but once that happens, it is very unlikely their knees will ever be normal.”

This topic and other sports injuries will be the focus of a Media Briefing entitled: “Mastering the ACL and Other Sports Injuries,” on Wednesday, February 25, in the Sands Expo Center, Venetian Hotel, Level One, Room 904 at 10:45am. Panelists include: Moderator: Darren L. Johnson, MD, James Andrews, MD, Freddie Fu, MD and Matt Matava, MD.