With Tiburon native Billy Mattimore scoring three of his five goals in a 3 minute, 49 second span of the third quarter, St. Ignatius turned a 6-5 lead into a rout that eventually saw the Wildcats win 18-6. St. Ignatius (7-1) has now won two in a row since a loss last week to Coronado ended a 43-match winning streak against California schools; Redwood (5-6) failed in its bid to move over .500 for the first time since it won its season opener.

“It’s tough running with the best,” Redwood coach Griffin Costello said. “But it was a great game. Every game we try to learn something new. It’s a big loss, but it’s a lesson to learn. Even the games we win, we learn what we do well, how we came out strong. How we did something different. So it’s always a learning experience.”

St. Ignatius never trailed, but the Wildcats never looked truly comfortable in the first half. After Redwood fell behind 4-1 in the first period, the Giants closed to within 4-3 when freshman Patrick Konttinen scored twice in 26 seconds early in the second period. After SI extended its lead to 6-3, Adam Rosenthal tallied to bring Redwood closer before intermission .

When Joe Klemme then struck 1:14 into the second half, the Giants were down just 6-5. Unfortunately for them, that goal would be among their final highlights.

Despite goalie Hunter Hall’s 21 saves, Redwood could not keep SI down and the deficit was 12-6 by the end of the third quarter. It never got any better for Redwood in the final period.

“The boys were waiting to explode and it took them awhile to get going,” St. Ignatius coach Chris Packard said. “I think we were a little slow to start but they hung in there and they look within so we appreciate how they’re staying together and using each other.”

Fatigue definitely took its toll on the Giants.

“At the end of halftime, I was still tired and we had to go back out there,” Redwood defender Jeremy Schwartz said. “But if we could have possessed the ball, it might have been a little bit different story.”

St. Ignatius clearly won the time of possession battle, launching attack after attack at the Redwood net. Eventually, those forays into Redwood territory paid off.

“We were a little bit frustrated just because we knew we were not playing to our potential,” Mattimore said. “We just wanted to come out and play like we know how, to our full potential. We still know that we are a good team and how well we can play.”

Despite the lopsided outcome, Packard said he was impressed with Redwood.

“Redwood, they’re a vastly improved team,” Packard said. “They have a bunch of nice players and a good philosophy. I was impressed with their defense certainly and how they moved the ball on offense.”

Posted in Colleges, National, Other States 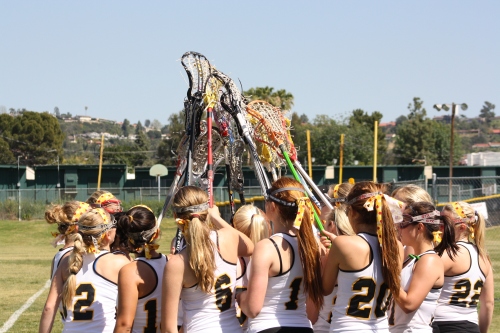 The 2009 Foothill High School Varsity Girls Lacrosse team demonstrated on Saturday that there is truly no “I” in team. Calling themselves a “Band Of Sisters” and wearing different color head bands for each game, Foothill pulled together when it counted most:  In the second half against a strong Cate School team that had recently captured the Rose Bowl Jamboree, including a  9-8 victory over Foothill.

Here are pictures of the action in that game: 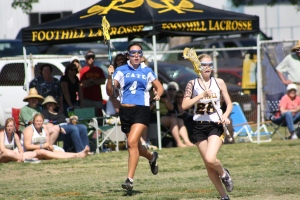 Foothill Varsity Girls on the attack against Cate School Saturday.

Foothill Varsity Girls had the advantage in shots on goal in the first half but great goaltending by Cate School limited the Lady Knights to 3 first half goals. 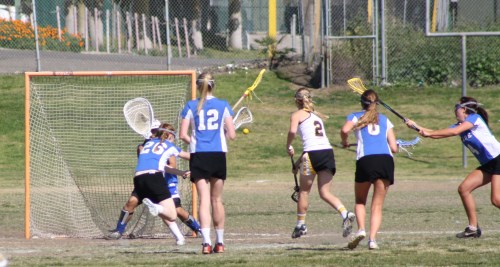 The Foothill Lady Knights lacrosse team came out firing against Cate School in the second half Saturday....

Foothill Varsity Girls lacrosse were starting to win most face-offs in the second half... 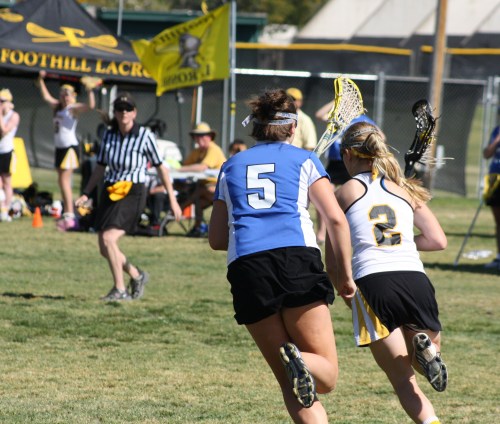 What are college recruiting evaluations?

Evaluations are off campus tactics that college coaches use to get an idea of your current athletic and academic skill level. Not only do they want to see that 4.4 forty, they want to see your Algebra grades and your SAT scores too!

Some coaches will evaluate prospects at the site of the high school or club, while other coaches will gather all the academic information they need electronically, or by regular mail and attend tournaments and showcases where their top prospects will be in attendance.

In a nutshell, evaluations offer college coaches with the information they need to determine the level of academic and athletic “stuff” you bring to the college recruiting table.

With the Spartans in the mix, the EBAL has the top five teams in the Bay Area News Group’s East Bay boys lacrosse rankings.

According to westsidelax, De La Salle is ranked 14th in the entire country and those same five teams mentioned above are ranked in the top 15 in California.

You would think that the coaches might not want a national powerhouse to come into the league if it is already competitive, but that doesn’t seem to be the case at all; especially for the defending champs San Ramon Valley and head coach Peter Worstell.

“I welcome them with open arms,” Worstell said. “Whatever raises the bar is a good thing. They’re the real deal as always and we want to play competitive lacrosse. The addition of De La Salle takes it to another level.”

The Spartans appear to be the favorite this year, but the Wolves have hung in there despite having four freshman in their six middie spots.

“This week will really tell us where we’re at,” Worstell said.

The Wolves play second-ranked Foothill Tuesday and will be at De La Salle on Friday.

The Spartans only loss this season came at Coronado, who is now considered the No. 1 team in the state. Coronado beat former No. 1 St. Ignatius Prep 7-6 on Saturday, which was the first loss to a team from California since losing to Monte Vista in April of 2006.

The top five is nothing but EBAL teams, for reasons that we have already discussed. The league is loaded and when these five teams face each other, it’s going to be a good game.

Acalanes and Berkeley are still playing well while Piedmont climbs back into the top 10 after going 3-0 last week. Las Lomas and Miramonte join the Dons as Diablo Foothill Athletic League teams in the top 10.

Clayton Valley drops down to No. 12 after two losses, one of them a 14-3 loss to Acalanes. The second tier teams in the EBAL, Cal and Livermore, are helping round out the top 15. This just goes to show you how deep this league is, because these two teams might be the best in any other league.