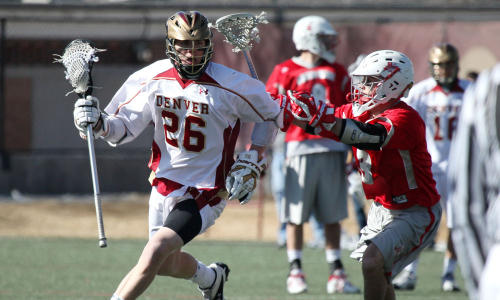 The University of Denver men’s lacrosse team (6-6, 1-2 GWLL) fell 10-8 in a heartbreaker to the No. 4 Notre Dame Fighting Irish (10-0, 3-0 GWLL) on Saturday afternoon before a crowd of 2,071 at Invesco Field at Mile High in the Sixth Annual Rocky Mountain Lacrosse Showdown.

The Fighting Irish led by as many as three, but Denver engineered a comeback to tie the score 8-8 with just minutes remaining in the fourth quarter.  In the final two minutes of play, however, the Irish scored two quick goals to put the Pioneers away for good.  It was the first NCAA Division I Men’s Lacrosse game to be played at Invesco Field.

“We were tied 8-8 with just a couple minutes left in the game and had the ball on offense: you can’t ask for a better opportunity to win the game,” said head coach Jamie Munro.  “It’s a tough loss, but the guys played hard though, and I’m proud of them.”

Denver opened the scoring early at the 12:54 mark when Lay found the back of the net on an unassisted strike for his eighth goal of the year.  Notre Dame answered midway through the first quarter when junior Grant Krebs equalized on an assist from senior Duncan Swezey.

Three good things happened in threes for the Oregon lacrosse team on Saturday in its finale at Papé Field.

Alex Breiner was one of three Ducks to score three goals, and Anna Poponyak made a school-record 18 saves to lead Oregon to a 15-10 nonconference victory over Virginia Tech.

Breiner, a sophomore, led all scorers with six points, including three second-half assists, as Oregon (10-3) fought back from an early 4-1 deficit.

“This was a great way to finish the season,” UO coach Jen Larsen said. “It’s a good day to be a Duck.”

Poponyak, one of six seniors honored before their final home contest, faced 34 shots. Among her 18 stops was the 500th of her UO career.

“This was a great way to send the seniors out, and it showed what we have for the future as well,” Larsen said.

“They have been a phenomenal senior class all four years.

“Having them was invaluable. They taught us what leadership looks and feels like.”

The twins combined to score five or UO’s eight goals after halftime.

The Ducks ended up with a 6-1 home record.

First the familiar offensive names for Princeton like Mark Kovler, Tommy Davis, the McBride cousins and the rest got second-ranked Princeton a lead. Then the two kids made it stand up.

Freshman goalie Tyler Fiorito saved a tough shot from Jason Duboe with 38 seconds to play and freshman defender Chad Wiedmaier stripped Dean Gibbons with five seconds to play to preserve second-ranked Princeton’s 10-9 win over No. 15 Harvard in front of 2,268 at the Class of 1952 Stadium.

The win improved Princeton to 10-1 overall, 3-0 in the Ivy League, heading into next week’s showdown in Ithaca against No. 3 Cornell, 8-2 overall and 4-0 in the league, in a game between the last two remaining Ivy unbeatens. Harvard fell to 5-4 overall, 1-2 in the league and has now lost to Cornell and Princeton by one-goal each on consecutive Saturdays.

The win was Princeton’s second 10-9 win in four days after the Tigers defeated Penn in overtime by the same score in Philadelphia Tuesday night. It was also Princeton’s 19th straight win over the Crimson, including back-to-back one-goal wins after a 9-8 win in overtime in Cambridge a year ago

Bob Schneider, who scored the tying and winning goals as the Tigers rallied to win the 2008 game against Harvard, was in the stands for the 2009 game watching some former teammates build the lead and then two players he never had a chance to play with make their big plays.

The game was tied at halftime at 5-5, but Princeton appeared to take control with leads of 8-5 at the end of three quarters and 9-6 when Kovler scored his second goal of the day with 8:41 to go. That goal gave Kovler two goals and two assists on the day and made him the 22nd player in program history to reach 100 career points.

Harvard wouldn’t go away, though, scoring back-to-back goals from Duboe and Kevin Vaughan to get within one with five minutes left. Jack McBride scored his second goal with 1:58 to play to make it a two-goal game again, but Harvard answered again, winning the face-off and then getting within one on Gibbons’ third of the day, with 1:16 left.

Again Harvard would win the face-off, and it gave the Crimson a chance to try to get the equalizer. The first chance came when Duboe let loose with a low shot through traffic from 10 yards out up top, but Fiorito was able to get his stick on it. The resulting loose ball bounced to the sideline, where two Princeton players and three Harvard players all dove fully extended and appeared to reach the sideline at the exact same time.

Harvard was awarded possession and called timeout with 33 seconds left. When play resumed, the Crimson got the ball to Gibbons, who worked one-on-one against Wiedmaier to Fiorito’s left.

“I was thinking back to his first goal,” said Wiedmaier, who finished with three caused turnovers. “He worked really hard to get back to his left, and I played him for that.”

Wiedmaier was able to knock the ball loose from Gibbons, and Charlie Kolkin scooped it up. Kolkin then lifted the ball down the field as time expired.

Duke senior attackman Ned Crotty turned in a career day to lead the eighth-ranked Blue Devils to a thrilling 15-10 victory over top-ranked and unbeaten Virginia in front of a capacity crowd for men’s lacrosse at Koskinen Stadium. Crotty tallied a career-high eight points from two goals and a career-high six assists to lead all scorers in the contest.

“I haven’t been scoring recently so to get two goals was nice,” Crotty said. “The six assists really were just guys getting open. The feeds weren’t anything amazing. It was just guys getting to open spots, catching and shooting it, which is pretty basic lacrosse we’ve been practicing all season.”

The win was the sixth consecutive for Duke over the Cavaliers as no current Blue Devil has lost to Virginia during his career. Duke’s last win over the nation’s top-ranked squad came on May 26, 2007 when the Blue Devils prevailed over No. 1 Cornell in the NCAA Tournament Semifinals in Baltimore, Md. Duke last defeated a No. 1 team in Durham on April 21, 2002, edging the rival Cavaliers 14-13 for the ACC Tournament title.

Duke (9-3, 2-1 ACC) owns a share of the ACC title with Maryland and Virginia (12-1, 2-1 ACC) and will be the No. 2 seed in the upcoming ACC Tournament. The Blue Devils have captured at least a share of the regular season title in four of the past five seasons.

“As a team I would say [this was our most complete game],” redshirt freshman Justin Turri said. “They’re one of the top scoring teams in the country and our defense played phenomenal, holding them to three goals in a half and 10 goals overall. Through the defense we gain confidence on offense and this was our best game shooting by far. I think everything came together for us today.”

The St. Ignatius boys lacrosse team trailed 2-0 early but used an explosive performance from its trio of senior attackmen to beat host De La Salle 17-8 Saturday afternoon in a meeting of the two top-ranked squads in Northern California.

“I think we have a lot of big games on our schedule,” St. Ignatius first-year coach Chris Packard said, “but when you play your backyard neighbor and you know a lot of guys on the other team, it’s great to get a win.”

St. Ignatius, which led 8-3 at halftime and 11-7 after three quarters, got eight saves from goaltender Willy Arbuckle.

“We were really unselfish, moved the ball and looked for the extra pass,” Packard said.