The Sea Kings scored four goals in the first six minutes against No. 6 St. Margaret’s before rolling to a 14-6 nonleague victory at Corona del Mar.

Corona del Mar’s returning players had some added incentive since St. Margaret’s knocked the Sea Kings out of the CIF tournament in the semifinals last year.

“We went into that game banged up but we weren’t ready,” Corona del Mar coach Mark Todd said. “This year, we were ready.

“We took a chance, we gave our guys spring break off so we weren’t sure if they were going to come back rusty or ready.”

Todd got his answer quickly as junior attack man Randall Nelson scored a goal two minutes into the match.

“That was our hope to get on them early and keep it moving fast,” Todd said. “They play a zone defense so our objective was to not let them settle down in the zone and press them right away before they could get in their defense.

“That’s a really good team and they played fast and hard and were the better team,” St. Margaret’s coach Gerry Manning said. “We just have to make adjustments and come out of our funk.

“We just need to step up and play the way we know we can play.”

“They’re our key guys,” Todd said. “They’ve done a great job for us all year. And our goalie had 13 saves, many on one-on-one (opportunities), so he’s an exceptional goalie.”

St. Margaret’s was led by attack men Mark Aghajanian and John Murayama, who had two goals each.

College Lacrosse Recruiting: Finding The Right Way To Communicate With Coaches Is Part Of Recruiting Success

What are some examples of communication tools?

There are a variety of ways to communicate with college coaches. Face to face contact, telephone calls and e-mail are just a few examples of getting on the radar. The trick here is to determine the individual ”preferences” each coach has and tailor your communication plan around what works best. It may seem like a lot of work, but trust me when I say coaches are tough to track down! In addition, when you do connect with the coaches, request their cell numbers. Your future success rate in connecting with the coaches will increase dramatically!


Oregon vs Simon Fraser in a major lacrosse battle for PNCLL leadership. Exciting game with Oregon leading at the end of each of the first 3 quarters. Amazing goals and hits.

Danny Glading is one of 10 student-athletes named a finalist for the 2009 Lowe’s Senior CLASS Award in men’s lacrosse.

The finalists were chosen from a list of 30 candidates based on personal qualities that define a complete student-athlete. These four primary areas of criteria include: classroom, community, character and competition.

The preseason Player of the Year by Lacrosse magazine, Glading has been one of Virginia’s key performers this year as the Cavaliers have been ranked No. 1 in the polls for most of the season. A four-year starter on attack, he has scored 18 goals and added 22 assists for the undefeated Cavaliers this spring. On the field he is a two-time All-American and All-ACC performer. In the classroom, the economics major from Bethesda, Md., has been named to the All-ACC Academic men’s lacrosse team and to the ACC Honor Roll during his career.

Two of the important elements of the 2009 Boys Lacrosse Team are the depth of the squad and the number of players from each class that have earned playing time. Or as Cade noted, “The drop off between the classes is getting less and less each year, which is great.”

When last we checked in with the CHS Boys Lacrosse Team, they were 5-0 and ranked as the No. 1 team in the state of California. They attained this lofty station in a straight forward manner, by defeating state ranked No. 2 St. Ignatius Prep, No. 3 La Costa Canyon and No. 4 Concord de LaSalle.

Justifiably feeling good about their early season results, the Islanders headed off for a spring break jaunt to Maryland, one of the hotbeds of prep lacrosse in the U.S., for a three-game set. Apparently the weather can still be cold in the Mid-Atlantic States in early April and the Islanders encountered snow and three tough lacrosse squads.

The first game was played against Islander Head Coach Alex Cade’s alma mater, Landon High School. The result was an 8-2 Islander loss, for an unusual reason according the Cade. “The kids came out nervous against a good team. Landon is a very talented squad and it was like blood in the water for sharks. They took advantage of our nervousness. We did some good things and it was a good test for our kids. We didn’t play our best lacrosse, but they got their heads on right. The next two games were much better.”

Opponent No. 2 was Wootton High School, which is the defending public school champion from the Washington D.C. area. They also reached the finals of the Maryland championships a year ago. The result was a 4-3 loss for Coronado, but according to Cade, the Islanders’ improvement was evident. “We played tough and dominated most aspects of the game, except shooting. Their goalie is going to either Harvard or Tufts and he played well. The kids finally got fed up with losing. This team has great character.”

Just to make it more of a challenge, the Islanders played their third game two hours later against Good Counsel High School, a game won by Coronado 7-1. “We dominated most aspects of the game after being really tired,” Cade said. “It’s a testament to the good athletes we have on our team, but we definitely have a lot of work to do to be ready to make a run at the title this year.”

Junior attackman Eddie Vita had a hat trick (this is apparently a lacrosse term as well,) which was nicely complimented by a goal and two assists from senior Bobby Braun. Single goals were scored by Johnny Poe, Kyle Runyon and Kodie Englehart.

Cade summarized the trip by saying, “We did fine. The kids did well and we grew as a team. It’s hard to know how much you’re going to improve until you play tough competition. The kids answered the call at the end.”

Two of the important elements of the 2009 Boys Lacrosse Team are the depth of the squad and the number of players from each class that have earned playing time. Or as Cade noted, “The drop off between the classes is getting less and less each year, which is great.”

As an example, Cade has a multi-player rotation for the attack position, including juniors Englehart and Vita and sophomores Runyon and Alex Bookout. Add senior Braun into the mix and the result is a potent attack.

The all-important midfield, which assists in the transition from defense to offense, consists of seniors Jackson Cusick, Ian McRae, Sean O’Brien, Andrew Funk and senior long stick middie Poe. Senior defensemen include Jonathan Little, Daniel Nevitt and John Waickwicz, who is currently injured. Junior Peter Zeller starts in goal for the Islanders and sophomore Curtis Nixon is a defensive starter as well.

Returning to San Diego County, the usual suspects are waiting to compete with the Islanders for the CIF San Diego Section title. They include La Costa Canyon, Poway, Torrey Pines and Rancho Bernardo. “The scenario is that any team in that group can beat the other,” said Cade. “It’s a mental game building for the playoffs for the team. The goal is to improve each day in practice. We’ve beaten Poway and La Costa Canyon and we play at Torrey Pines on Wednesday. We’re moving along. It’s early-season lacrosse and we’ve been here before.” The Islanders second game of this week is Friday at La Jolla. The Torrey Pines game will start at 7:30 p.m., and the La Jolla game will face-off at 7 p.m. 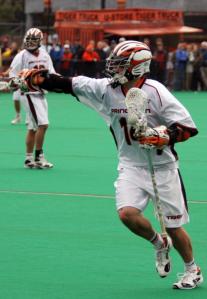 Photo by Dan Hayes-Patterson Sophomore attack Jack McBride leads the men’s lacrosse team with 27 goals thus far this season. McBride and the No. 1 Tigers head to Ithaca, N.Y., to battle the No. 5 Big Red in a Saturday matchup.

To say that Saturday’s matchup against Cornell is a big game hardly does justice to the occasion. No. 1 Princeton (10-1 overall, 3-0 Ivy League) and No. 5 Cornell (8-2, 4-0) will face off in Ithaca, N.Y., this weekend in a matchup between the last two unbeaten teams in Ancient Eight competition. The winner of this game will ride the momentum into the finishing weeks of the regular season and will be all but a lock for the league’s automatic bid into the NCAA tournament.

“It’s a big game,” junior midfielder Paul Barnes said. “Obviously Ivy League games are always important for us to try and win a league title.  Cornell’s a really good team with big offensive guys, but we just have to focus on ourselves and play our own game.”

At the top of the United States Intercollegiate Lacrosse Association Coaches Poll, Princeton is in a position it hasn’t occupied since 2001. Maintaining that top ranking, however, will require three more weekends of top-notch play.

“It’s pretty incredible being ranked No. 1, and it’s really a great honor. But as of right now, that doesn’t really matter all that much,” freshman goalie Tyler Fiorito said. “What we’re working toward … is a championship, so in that sense, it doesn’t really matter what our ranking is at this point. And especially going into Cornell, we still have to deal with the fact that they’re a great team.”

Statistically, Cornell has performed at a much higher level in conference play this season. The Big Red has posted an average margin of victory of nearly eight goals in its four conference wins. Princeton, however, has had a tough time pulling away from opponents, as evidenced by the Tigers’ most recent two games, which were nail-biters that came down to the last second.