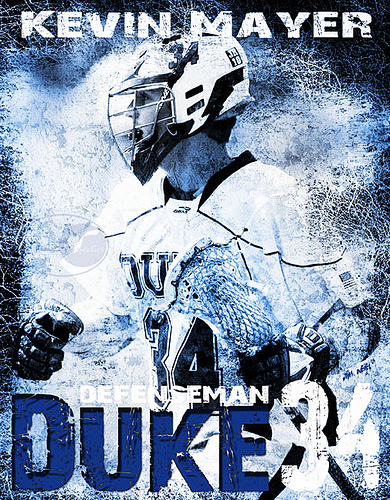 The words mean ‘leadership by example’. It is the motto of the Officer Candidate School in Quantico, Va., for the Marine Corps.

They are words that struck a chord with Duke graduate Kevin Mayer, who during the 2008 summer attended the 10–week Officer Candidate School. 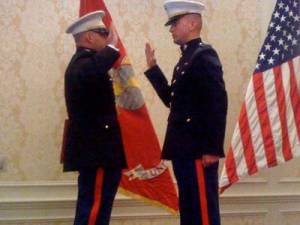 On May 11 of this year, a day after graduating from Duke University, Mayer accepted his commission into the Marine Corps, receiving his first salute, becoming a Second Lieutenant in the Marine Corps.

Head coach John Danowski and the rest of his teammates were on hand to witness Mayer receive his oath.

“It was incredible having [Danowski] and the whole team there because they are so much of what I have been the past five years,” Mayer said. “I know I would not be as prepared to go and be an officer in the Marine Corps had I not been a member of the Duke men’s lacrosse team. That helped me in so many ways.”

Last week, on June 2nd, he reported back to Quantico to begin Basics school, which will last for five to six months.

The urge to do something important and something that would help bring meaning to his life has always been important for the Duke defensemen.

Words from his father, Dr. Tom Mayer, a 1977 Duke graduate, played an invaluable role as Mayer looked to find what he was passionate about.

“My dad has always told me, ‘The best thing you can do is find where your deep joy intersects the world’s deep need’,” Mayer said.

But when Mayer attended Officer Candidate School last summer, he did it without knowing if he would accept his commissioning into the Marine Corps.

“I said I’ll go, and then I’ll think about it for a few months before I make a decision and the longer I was back at school from having gone to OCS the more I realized how much it meant to me,” Mayer said. “It was so important, and I had such a great opportunity in front of me to keep going with this and to hold myself to a high standard of a four–year commitment and maybe beyond that.”

For Mayer the 10 weeks were as much of a mental test as they were a physical challenge, but with the support of his teammates on the men’s lacrosse team and his family the Great Falls, Va. native completed his 10 weeks graduating first out of his company.

He described Candidate School as a screening process where the officers place physical and mental stress on the candidates to see how they respond, adapt and think during demanding situations.

Fifty percent of the training dealt with building leadership skills, while another 25 percent involved academics and the final 25 percent was physical training.

“I think the most stress I almost put on myself,” Mayer said. “For the first three weeks I wanted to succeed so badly, and it was something that I wasn’t really familiar with. I didn’t really have any military background. It was everything from knowing when to salute and making sure your uniform is ready every day, and then the sleep deprivation was hard. You are so worried when you get there that it is hard to sleep because you’re worried about what you have to make sure you accomplish the next day.”

When Mayer looks back over the time spent at OCS, he remembers an exercise that was, while he was doing it, one of the most exhausting and mentally tiring he had ever completed in his life, but now understands the importance it served.

“We spent one day running in and out of our squad base for about an hour and a half and every time we would get in take off all our gear,” he said. “They would say, ‘Too slow, put it back on. Go back out’. That is something that I remember as one of those moments where you’re doing it, it’s the worst thing you have ever done, but now I look back and sort of remember it fondly. It is one of those things that I am glad that I pushed through when I was there and kept the larger picture in mind.”

Throughout the 10 weeks, Mayer and the other candidates were expected to be prepared for everything that was thrown at them. From getting into formations to preparing for ambushes, each test is evaluated to see who can truly lead by example.

“You can either do it or you don’t,” Mayer said.

Back when Mayer was deciding on whether to attend OCS, he turned to his uncle, Captain Bill Henry, who was in Desert Storm as a signals intelligence officer, for advice.

“He told me about OCS specifically,” Mayer said. “He said they are just going to push you and it is just a grind to get through. It’s not so much if you question yourself when you are there it’s just a matter of when that time happens. He said everyone at some point there is going to say is this really for me.”

His Uncle also told him that it was the best decision he ever made. He met people and got to travel and knew he was doing something important.

And that is what appeals to Mayer about the Marines.

He loves holding himself to a high standard. He loves the idea of leading your Marines and doing so without recognition and keeping the key values of the Marine Corps, honor, courage and commitment, close to his heart.

“Accepting a commission into the Marine Corps to me means accepting a higher calling to serve our country at a time of war,” Mayer said. “But also to do it with the key value of the Marine Corps, honor, courage and commitment in mind, and doing so with always keeping yourself with the highest standard and knowing you are going to be leading some of the greatest 18 to 20 year olds that our country has.”

Player of the Year–Bobby Braun (Co).

Selected by San Diego Section Advisory Committee with input from coaches within each division under the auspices of the San Diego Hall of Champions.

Riddle was also recognized as the East Bay Athletic League MVP this year. Riddle will be attending Cal Poly and hopes to crack the lineup with the defending Western Collegiate Lacrosse League champions.

Riddle comes from a strong lacrosse family. His oldest brother Dan played for Sonoma State for four years. He was a three-year captain and two-time All-American. Dan Riddle also played in Japan for the USA West team. Kyle Riddle’s middle brother Tim, is currently a captain for UC San Diego where he was last year’s MVP as a sophmore.

What are some criteria that coaches use in distributing scholarships to prospects?

This is a great question and I firmly believe the answer has changed somewhat in recent years. Obviously, the coach wants to bring the strongest talent possible to the program and the competition for the direct impact players is fierce. These days coaches are looking further out in an effort to grow “excellent” programs for the future.

First, they want strong athletes who will help advance the program to new levels. Second, they want strong students who will be able to manage the academic workload and avoid any issues with eligibility and finally, coaches are looking for young men and women with integrity, who are willing to be strong links in the team chain that has been painfully developed during a coach’s career.

The “go to” Information Site 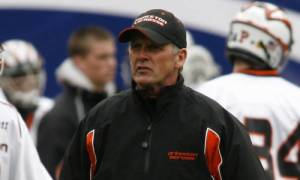 “We are thrilled to announce the hiring of Bill Tierney as the newest men’s lacrosse coach at the University of Denver,” Bradley-Doppes said. “He is a tremendous addition to our coaching family and someone who will elevate our program into a national contender. Bill is one of the best coaches of any sport at any level and is highly regarded in collegiate lacrosse. He demands a lot of his student-athletes on the playing field, as well as in the classroom, and is the perfect coach to take our program to the next level.”

His impact on the student-athletes at Princeton has resulted in 26 first-team All-Americans, 73 first-team All-Ivy League selections, seven Ivy League Players of the Year, six Ivy League Rookies of the Year and over 20 USILA Scholar All-Americas. He has recruited and coached two winners of the Lt. Raymond J. Enners Award as the national player of the year (David Morrow in 1993 and Scott Bacigalupo in 1994).

“I would like to thank Princeton for 22 years of support and happiness, and for the ability to take this program to the level that it’s at now,” Tierney said. “I’d also like to thank the University of Denver for giving me this wonderful opportunity to start this new chapter in my life. Everyone from the Board of Trustees to Chancellor Robert Coombe and Peg Bradley-Doppes has been absolutely great during this entire process. I am looking forward to helping the DU men’s lacrosse program reach new heights.”

Outside of his collegiate coaching honors, Tierney has coached the United States to the World Championship in 1998, and was inducted into the U.S. Lacrosse Hall of Fame as part of the 2002 class.

Tierney replaces Jamie Munro, who resigned on May 7 after posting a 91-70 mark in 11 seasons. Tierney will begin as head coach of the Pioneers effective July 1, 2009.

Player of the Year–Trevor English (Gr)