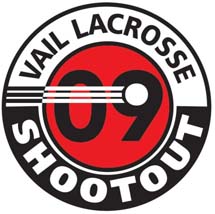 Gang Green had to endure overtime to defeat CRSLax.com 12-11 in the Women’s Elite title game. Both teams were stellar all tournament and seemed destined to meet on the final day. They did not disappoint, giving the Shootout its first overtime title game in years.

The staunch defensive effort of Merrill Lynch/Lacrossewear held the balanced Big Red offense at bay. All-Tournament long poles Tim Shaw (Virginia), Billy Haire (Bucknell), and Tom Izard (Bucknell) hounded the Team 21 offense all game. All three were essential in keeping 21 off the board for a stretch that from the end of the first quarter until only 8:31 remained in the third.

Merrill Lynch/Lacrossewear used their size and speed to dominate the possession game, scooping up 43 ground balls and winning 18 face-offs on the afternoon. In contrast, Team 21 got only 19 ground balls and four draws. The game was extremely well played by both teams as there were only two thirty-second penalties in the entire game.

Tournament Defensive Most Valuable Player, Chris Madalon (North Carolina) finished with six saves in his half of play. Madalon made several great stops throughout the tournament, and was the second-half anchor for the champions. Matt Madalon (Roanoke) also made six stops in the championship game during his half of play. For team 21 A.J. Fiore (Cornell) finished with fourteen saves and also played well throughout the four days. The young goaltender will be heading to Cornell for his freshman year this fall.

Rocco Romero (Cornell) was also an All-Tournament selection and finished with one goal and two assists on the day for Team 21. Bobby Magrin (Herkimer) had a hat trick and that included a laser of a shot that hit the top corner.

For Merrill Lynch/Lacrossewear, it is their first Vail Shootout title after several years of near misses. They were simply the better team throughout the tournament and will be the favorites coming into 2010 as well.

In the Gold Division, the first overtime game in several years as the game went back and forth. With several ties in the course of the game, CRSLax.com scored the last goal in regulation to tie the game. In overtime CRSLax.com took the first shot on goal but Gang Green’s goalie, Julie Wadland, made the save. Gang Green, not to be out done, took the ball and went down field. Colorado’s own Annie Liebovitz had possession at the top of the fan, made a few moves and placed the ball in the top corner for the winning goal.