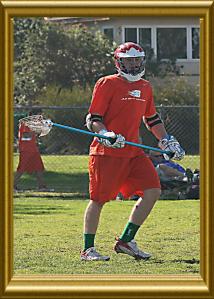 How old were you when you first started playing lacrosse, and who got you into it?

I was in 3rd grade when I started playing. I first got into it because two of my older brothers played and they wanted someone to shoot on. They stuck me in goal, and I played goalie until 8th grade when I decided to transition to defense, and it was the best decision I ever made.

When did you first start considering UMBC?

I first started considering them when I received my first email from the Coach Tracy, and then began communicating with them pretty regularly. They first saw me at top 205 for incoming juniors, and then they proceeded to come to other tournaments I was at.

What role did Starz play in the recruiting process?

It played a huge role for me; almost all of the schools that saw me play were at the Adrenaline tournaments. Without Starz I would not have gotten the exposure I needed. I played for Arizona Starz (currently called Arizona Burn) with Chris Malone, who is bar none the best coach I have ever had. I also played West Coast Starz for coach Jason Leneau  who was key in my development, and also winning in those tournaments

What are your goals as a collegiate player at UMBC?

My goals are to just get playing time as a freshman. As I get older it will eventually be to start, and excel at my position as one of the best.

What has been your best lacrosse memory so far as a player?

My best lacrosse memory was winning The Arizona State Championship last year with Chaparral, and finally beating Brophy. I had played in the state championship twice before against Brophy, and lost both times, so winning it was definitely one of the best experiences I’ve ever had.

Do you think you guys will make it back to state again this year?

Yes I do believe we will make it back to state this year. In the offseason we got a new coach, Jeff Guy. It’s been very different so far into the practices, but we have our starting defense returning so I still think we can win it all.

How has the lacrosse scene in Arizona changed since you first started playing?

Arizona lacrosse has changed drastically. When I first started playing was when Arizona lacrosse was just getting started. The league started up in 1998 and my brothers were right there playing so I was going to every game and watching. The growth is pretty cool. The level of play has improved immensely, and it has grown from 6 teams in ’98 to over 50.

Who is the college/pro lacrosse player that best embodies your style of play?

Brodie Merrill would be my best bet. He is a transition Defender which I love bringing the ball over and creating offense on my own. And he is a shutdown defender, which is what I aspire to be.

Do you have an idea of what you want to major in at UMBC?

I want to major in history as of right now, but who knows I still have time to think about it and it could change to economics, we’ll see.

Do you have any pre-game superstitions or rituals?

Before any game I like to have a really big meal, and don’t like being around other people really either. I just eat and focus and what lies ahead of me in the game.