Can the Knights win a fourth consecutive crown?

Foothill looks like it has a legitimate shot based on the returning players from last year’s 20-5 team that defeated Loyola of Los Angeles, 10-7, in the section championship.

“It’s possible, we should be in the running,” Foothill coach Jon Fox said. “We have the advantage of having been there. We have a good amount of returners with some experience and the same coaching staff back, which is good.”

Leading the way is senior goalie Nathan Kleponis, who had 10 saves in three quarters in the sectional title match. Also returning is senior attack Taylor Deberry, who scored the last-second winning goal against El Toro in the quarterfinal round of the county playoffs.

Foothill Knights Lacrosse junior attacker #7 Cameron Cole has averaged over 5 goals per game after first 3 games of the season as the Knights have gone 3-0. Photo by LaxBuzz.

Cooper Pickell, the leading midfield scorer last year, also returns, but the junior will join the team late after completing his postseason play with the boys basketball team.

“The offense should have firepower so it’s up to the defense to get them the ball,” Fox said.

Evan Youngstrom can recall the exact day he fell in love with lacrosse. 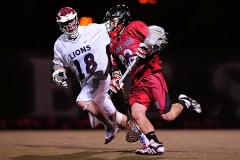 The Aztecs played against LMU early in the season, and with Youngstrom’s help won 8-7 in overtime. Courtesy of SDSU Club Lacrosse

He was young. It was that age when children become sadly aware of their growing neglect for action figures or Barbie dolls, but still in that stage when they can’t get enough of sleepovers, trampolines and Power Ranger episodes, (Youngstrom’s favorite Power Ranger was the blue one.)

In fact, it was after one of these episodes in fourth grade when his neighborhood best friend, Justin, came to Youngstrom’s door holding two lacrosse sticks and a ball.

“Wanna play?” Justin asked in a way that only kids do. It was the first time Youngstrom had laid eyes on a lacrosse stick, so he shrugged his shoulders.

In Youngstrom’s first attempt to catapult the ball from his stick to Justin’s, the ball zipped out like a rock from a slingshot and sailed over his friend’s head into the crisp Colorado sky.

Had that ball sprouted eyes in midair to look back and below at Youngstrom, it would have seen the look of a boy who would remember that moment for the rest of his life. And this look followed that ball until several roofs blocked Youngstrom’s vision.

“It was awesome,” Youngstrom recalled smiling. “After that I was just hooked.”

Since that day, Youngstrom seldom went to Justin’s house to jump on the trampoline or to look at his friend’s hot older sister. Instead, Youngstrom went to play lacrosse. And if Justin preferred to jump on the trampoline, that was fine. All Youngstrom needed was a ball, a stick and a garage door that could last as long as he could. The way Youngstrom played against garage doors would have given Forrest Gump’s competitions against the other side of ping-pong tables a run for their money.

But that has caused a serious problem for him. Because Youngstrom ran so much as a child, he developed Osgood-Schlatter disease, which produces severe knee pain.

“When I sprint, it kills me,” Youngstrom said.

This disease has left him able to play only one position on the lacrosse field besides goalie: face-off specialist.

If you haven’t seen a face-off in lacrosse, it’s like watching two pit bulls in RoboCop gear on a tight leash, nose-to-nose and staring at a rubber ball grounded just inches away. At the sound of a referee’s whistle, the two are released to fight for possession. The quickest usually wins.

In San Diego State’s first game this year against Loyola Marymount, Youngstrom made the opposition look like a tipped-over bucket of slow-moving Silly Putty in 85 percent of the face-offs.

After routinely humbling his opponent, the All-Conference lacrosse player would then pass the ball to a teammate before quickly getting substituted off the field, customary for Youngstrom because of his knee condition.

But after the Lions scored a couple of late goals to send the match into sudden death, Youngstrom decided the game would rest in his hands. And because of that, the ball would later rest in the back of Loyola Marymount’s net.

“I told one of our attackers (before facing off for sudden death) that if I win this clean, I’m running down and I’m shooting it,” Youngstrom said.

Crouching down to face-off for the 19th and final time, Youngstrom dug into the rain-soaked turf to do exactly that.
After the face-off whistle blew, the quicker Youngstrom flicked the ball past his counterpart and dodged around the man he had ruined for the 16th time that night.

Accelerating to full speed, Youngstrom scooped the ball clean and charged for the away team’s net. When he got 12 yards out, Youngstrom cranked a violent shot.

But instead of launching the ball into the vast blue firmament the way he did his first ever throw, Youngstrom bounced it.  And with the sort of accuracy that is learned from someone who has played the game since fourth grade, he stuck the ball in the top right corner of the net.

Had that ball sprouted eyes to look back and up at Youngstrom, it would have seen a man through which the sport shines, and the look of a boy who would remember this moment for life.

It would have also seen his teammates, mother and dog running onto the field to embrace him.

The University of Colorado lacrosse team has a new head coach in Pete Stevenson. News Team’s Ron Knabenbauer explores the difficulties that he faces in his first college head coaching job.