Notre Dame is making the most of receiving an at-large berth to the NCAA men’s lacrosse tournament. Sophomore Sean Rogers scored three goals to lead the unseeded Fighting Irish to a 7-5 upset of third-seeded Maryland on Saturday in the national quarterfinals at Princeton Stadium

Awarded a berth despite losing four of its final six regular season games, Notre Dame (9-6) jumped out to a 5-1 lead and held off the Terrapins by dominating the midfield, winning the face-off battle and taking advantage of Maryland’s poor shooting. 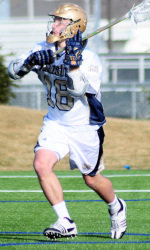 Sophomore attackman Sean Rogers scored on all three of his shot attempts against Maryland. Photo courtesy of Notre Dame Athletics.

between Army and Cornell in a semifinal next Saturday. It will be Notre Dame’s second appearance in the final four, but first since finishing third in 2001.