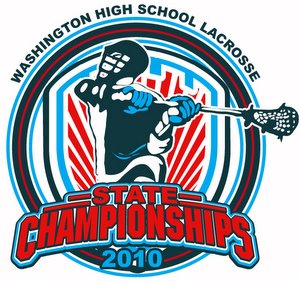 Ryan Deal scored with 1:50 remaining in overtime to give Bellevue its first state boys lacrosse title in 19 years with an 8-7 win over Mercer Island Saturday night before 2,650 at Seattle’s Memorial Stadium.

It was the Islanders’ first loss in 22 starts this season, and their first to Bellevue since 2002.

The overtime period was set up as Wolverines midfielder Eric Omri beat Islanders goaltender Hap Giraud with 26 seconds remaining in regulation to knot the score at 7.

“…the Mavericks convincingly defeated Torrey Pines 12-6 in the section boys lacrosse championship game at Del Norte High. It was the fourth time the two North County rivals met in a

The La Costa Canyon Mavericks, No. 2 in the sport’s state rankings, got four goals from senior midfielder #6 Ian Hare. Photo by LaxBuzz.

section final in the sport, but the first win for the Mavericks, who did win section titles in 2005, ’06 and ’08 against other opponents.”

The Mavericks, No. 2 in the sport’s state rankings, got four goals from senior midfielder Ian Hare, plus two each from midfielder Michael Gennuso and attacker Timmy Andrews. The winners were keyed by scoring spurts of four unanswered goals late in the first half and a stretch of four goals to one by Torrey Pines midway in the second half for a 10-5 lead.

Notre Dame is located the farthest west, by far, of any team to reach the national title game.

The N.C.A.A. men’s lacrosse tournament has long been dominated by one of the most

persistent monopolies in sports. Only four teams — Syracuse, Johns Hopkins, Princeton and Virginia — have won the title since 1992. Despite the game’s rapid growth, it has flourished in the same areas and been dominated by teams wearing familiar jerseys.

No. 5 Duke upset No. 1 Virginia, 14-13, on a Max Quinzani shot with 12 seconds left in a scintillating game. Unseeded Notre Dame cruised past No. 7 Cornell, 12-7, in the other semifinal behind brilliant play in goal by Scott Rodgers.

Neither Duke nor Notre Dame has won an N.C.A.A. men’s lacrosse title. This will be the first time two teams will play for the title without one of them having won one since 1973. For perspective, that was the third year of the N.C.A.A. tournament.

“For a lot of people, I think, having the two most successful programs in women’s lacrosse meeting is phenomenal,” said Sheehan Stanwick Burch, women’s lacrosse analyst for CBS College Sports Network. “Both teams are so athletic, so talented and really strong defensively.

They have 15 national titles between them, including 13 of the past 18.

No. 1 Maryland vs. No. 2 Northwestern for the NCAA women’s Division I lacrosse

When the teams square off at 5:30 p.m. today at Towson’s Johnny Unitas Stadium in their first meeting since 2007, they bring much more than their top rankings. They have 15 national titles between them, including 13 of the past 18.

Maryland (21-1) has twice as many championships with 10 (one before the NCAA took over the tournament), but the Wildcats (20-1) have all the momentum. They come in as the five-time defending champions. The Terrapins have a record seven straight crowns, but they haven’t won since 2001, the last year of that streak.

In the official Colorado prep history of lacrosse — girls were sanctioned in 1998, the boys a year later — a combined 25 titles have been handed out. Cherry Creek has won 12 of those.

Dwyer had promised his team it could shave his head if Cherry Creek went undefeated en route to winning a state title. After a 19-0 season, the clippers came out.