The program included a video of the team’s remarkable journey and remarks from US Lacrosse and team staff followed by the presentation of the rings from Head Coach Mike Pressler. The FIL World Championships were held in Manchester, England, July 15-24, 2010. The team finished the tournament with a 6-1 record, defeating and reclaiming the gold from Team Canada in the championship game, 12-10. This is the ninth world champion title for Team USA.

As the U.S. men’s national team’s year comes to a close, the U.S. women’s U19 national team prepares to defend its 2007 world championship title. Head Coach Krystin Porcella and the team will travel to Hannover, Germany for the 2011 FIL U19 World Championships, Aug. 4-13.

For years lacrosse has been ruled by an exclusive club, then North Carolina upset mighty Johns Hopkins to swell the membership.

North Carolina lacrosse Coach Willie Scroggs called for the locker room door to be closed moments before his team was to take the field last Saturday in Princeton, N.J. for the NCAA championship game against Johns Hopkins—fabled Johns Hopkins, No. 1-ranked Johns Hopkins, undefeated Johns Hopkins, three-in-a-row national champs Johns Hopkins. With steely eyes, Scroggs told his players, “Look, it isn’t a fluke we got here. And we’re not going to worry about who they are. All we want to do is concern ourselves with who we are. O.K., boys, let’s saddle up and get ’em.”

The result was a stunning 14-13 upset of Hopkins—against whom excellence in college lacrosse generally has been measured since 1891. It was also a signal that the clubby world of lacrosse, where over the past couple of decades Hopkins, Maryland, Navy and Cornell have been the elite, now must welcome a new member to its upper stratum.

Before a sun-drenched crowd of 22,100, a record for this event, the two schools put on a magnificent contest that led Scroggs to say, “This game proves you don’t need to understand lacrosse to enjoy it.” But for those who did understand, the spectacle was unmatched. Much of the stickhandling was peerless; the effort 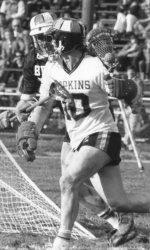 was total; the incredible play of Hopkins Attackman Jeff Cook, who scored six goals, demonstrated he is the best lacrosse player in the country; and the goal-tending of North Carolina‘s gambling and rambling Tom Sears was superb.

That the Tar Heels, 11-0 going into the title game, have emerged as a lacrosse power is no surprise. Scroggs played at Hopkins in the ’60s and later was an assistant coach there. Two of his assistants also played there. And all of them recruit in the Blue Jays’ favorite areas—Baltimore and Long Island—luring prospects to Chapel Hill with tales of great weather and fun times, most of which are true. Losing Coach Henry Ciccarone said of Scroggs, “I guess it took a Hopkins guy to come back and beat us.”

But it also took some mighty good luck—which brings us to Michael Burnett, the Tar Heel sophomore attackman. Before the big game, he sat in a motel room searching for the right word to describe himself during his growing-up years. He mumbled and shook his head until his inquisitor suggested: rotten.

“Yeah,” said Burnett, “rotten. That’s perfect. That was me. Rotten.” He was raised in Arnold, Md., in a house hard by a cove of the Severn River. “I looked around as a kid and saw everybody was playing lacrosse,” he recalled. Of course, he also looked around and saw everybody was going to school, but that was not so appealing. During his high school years, Burnett preferred swinging on a rope over the river and going to rowdy beach parties. Worse, one of his buddies drove a boat to school, and at the merest hint of a nice day the two would cut class at their now-defunct private school, Wroxeteron-Severn. It was just the boys, the water and a case of Olympia. The headmaster was not amused and gave Burnett the option of transferring or being expelled. Burnett transferred, to St. Mary’s in Annapolis. Burnett was a fine lacrosse player at both schools, but when it came time for colleges to consider him, “My grades scared most everybody off.”

Scroggs knew about Burnett—Scroggs knows about everybody—and decided to give him a chance. Predictably, when Burnett wandered into Chapel Hill in 1979, he got involved in listening to a friend’s stereo, playing darts, missing classes and hanging around fraternity houses “because that’s where the free beer is.” He had grade trouble by May of last year. But summer school brightened him up sufficiently to enable him to play lacrosse in 1981, and suddenly Burnett became a team leader. He credits the steadying influence of a new girl friend. Tiffany Terranova. O.K., so he still flunked French this year. “The difference is he cares that he flunked,” says Scroggs. “That’s progress. Look, I’m not into saving souls. But if a player wants to try and do what I say, I’m willing to give him a chance.” So Burnett led the Tar Heels in goals with 26 and assists with 31 to the utter amazement of everybody. Without Burnett—the new Burnett—North Carolina almost certainly wouldn’t be the NCAA champion. “I could have done better before and I should have done better, but I didn’t,” says Burnett.

When play began last Saturday, it quickly became obvious that the Tar Heels were going to have to do a lot better as they fell behind 2-0 in the first seven minutes. They passed shakily, played defense poorly and seemed, just as the smart money had predicted, thoroughly intimidated by Hopkins. Twice in the first half North Carolina trailed by three. If Burnett hadn’t gunned home two second-quarter goals, a Hopkins rout might have been on. At the half, the Tar Heels were behind only 8-7, but this was the first time all year that they had trailed at the intermission.

Still, the typically calm Scroggs—”I like the idea that if I’m in a room, you may not even know I’m there”—insisted to his outplayed troops that “we’re just a step away from causing them a bunch of problems. Look their goalie in the eye and shoot the ball at his knees. O.K., boys, let’s saddle up and go get ’em.” 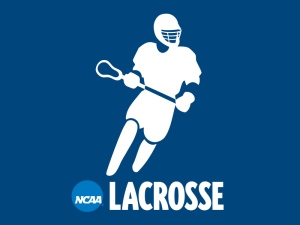 “I’ll be doing anything I can to help them navigate through the mine fields,” Cottle said. “Every institution has some challenges, and I do know the challenges of building a lacrosse program. I have experience at a big school and a small school so I think I can help them.”

Deputy athletic director Mike Broeker said the school was attracted to Cottle’s background as a coach, evaluator and advisor.

“I think it would be hard for us to find a better lacrosse person in the industry to help with something like this,” Broeker said. “He’s so passionate about what we’re doing and I think that’s so outstanding to be so passionate about this sport. It’s inspiring. I wish we could start tomorrow.”

Before posting a .688 winning percentage over nine seasons with the Terps, Cottle helped build Loyola into a perennial Division I powerhouse. Cottle’s teams at Loyola made 14 consecutive NCAA tournament appearances, and his reputation as an architect made Cottle an attractive option for Marquette.

The addition of lacrosse will bring the number of varsity programs at MU to 16, with eight each for men and women.

Both teams will be fully funded with the maximum number of scholarships and coaches allowed by the NCAA. The average roster size for a Division I women’s lacrosse team is 25.5 student-athletes compared with 44.8 individuals on the men’s side, according to MU.