The Air Gait: “…Gary charged the back of the net… His last contact with terra firma occurred just outside the crease. As he hurtled past the goal, Gary reached his stick around the goal and deftly whipped the ball in. He touched down inside the crease, but it was no violation because the play had ended when the ball broke the plane of the goal.

The Air Gait: This is a move that in two years has become part of the sport’s mythology. In lacrosse, as in ice hockey, the playing surface extends behind the goal. One difference, however, is that in lacrosse the crease, which is 18 feet in diameter, completely encircles the goal. Also, nobody but the goalie is allowed to set foot in the crease. As a result, until 1988 no one had ever made a direct attack from behind the crease, so when Gary circled behind the goal during a quarterfinal game in the NCAA playoffs that year, Penn goalie John Kanaras saw no immediate cause for alarm. Suddenly, Gary charged the back of the net. His last contact with terra firma occurred just outside the crease. As he hurtled past the goal, Gary reached his stick around the goal and deftly whipped the ball in. He touched down inside the crease, but it was no violation because the play had ended when the ball broke the plane of the goal. 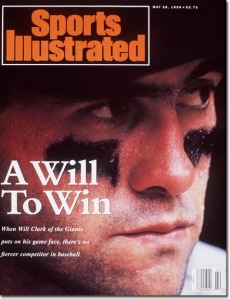 The Gait brothers have the Orangemen at the top

The gates—and the Gaits—opened quickly on Sunday afternoon at the Carrier Dome in Syracuse, where the Orangemen were playing Brown in the second round of the NCAA lacrosse tournament. The game was a scant 12 seconds old when Gary Gait picked up a loose ball and fired it to his identical twin brother, Paul, who was cutting toward the goal. After Paul caught the ball on his left side, the obvious thing for him to do was to let fly at Steven Ayers, who had the misfortune of being Brown’s goalie. But what magician deals in the obvious? Paul whipped his stick around the back of his head and shot the ball from his right side. It bounced once and went into the net.

Ayers was asked later if he had had a chance. “If I’d been expecting it,” he said. “But he has so many other moves. You’ve got to respect the basics first, and then if he pulls one of those on you, it’s just a great shot.”

Ayers was beaten again only 13 seconds after Paul’s goal, when Gary ripped one past him. Though Gary would score twice more in the next 3:46 and would end the game with five goals and four assists, it was his fourth goal that lifted 11,523 fans to their feet and had them craning to watch replays on the TV monitors in the Dome’s luxury boxes. On this one, Gary circled behind the goal, dived to the ground and whipped the ball around the near post while stretched out on his belly.

“He did what was unexpected,” Paul said. “Deception is the key to this game. I think someone called it the Subway Gait.”

Indeed, soon the only challenge left for the 23-year-old seniors may be that of devising nicknames for their ever-growing repertoire of moves. Gary’s five-goal performance in Syracuse‘s 20-12 win over Brown gave him a career total of 182. That puts him tantalizingly close to the U.S. Intercollegiate Lacrosse Association career record of 193, set by fellow Canadian Stan Cockerton, who played for North Carolina State from 1977 to ’80. Gary has two more chances at the record: The Orangemen face North Carolina in a semifinal on Saturday; if they win, they’ll play for the NCAA championship in New Brunswick, N.J., on Monday.

The record would almost certainly be Gary’s already had he not been part of what many observers call the finest college lacrosse team in history. It’s a juggernaut that includes not only the Gait brothers, who are midfielders, but also All-America defenseman Pat McCabe and attackmen Tom Marechek and Greg Burns. Syracuse went 10-0 in the regular season this year, walloping opponents by an average score of 21-9, and entered the NCAA tournament, which it has won the past two years, as the top seed.

The Orangemen’s one-sided victories have cut heavily into the Gaits’ playing time. Not only has Syracuse coach Roy Simmons Jr. pulled them during the second half of most games, but he also could find only 10 schools willing to play the twins at all. “A lot of teams dropped us from their schedule,” says Simmons. “They wouldn’t say why, but it’s interesting that they’ve promised to play us again in 1991.”

But the Gaits don’t bemoan the fact that Gary is likely to fall short of the scoring record. In their four years at Syracuse, both brothers have received more than their share of recognition. In 1988, as a sophomore, Gary scored 70 goals, which was the collegiate single-season record until this year, when Yale senior Jon Reese scored 72. The same season, Gary scored an NCAA tournament-record nine goals in one game against Navy and won the Enners Award as the top college player in the country. That might have created a fierce sibling rivalry if the sibling in question were anyone but Paul Gait, who was named the MVP of the championship game last year after getting four goals and two assists in the Orangemen’s 13-12 win over Johns Hopkins. This year, Paul led Syracuse in total points with 51.

“They’re in a different stratosphere, trying things that haven’t been tried before. And it’s compounded by the fact that there are two of them,” Says Brown coach Dom Starsia.

The Gaits have become their sport’s first bona fide stars. “The media attention is unlike anything there has ever been in lacrosse,” says Syracuse assistant sports information director Bill Strickland. “They’ll spend an hour after an away game signing autographs. They’d do more, but I pull them away to get on the bus.” The Orangemen drew 18,244 fans to the Carrier Dome March 24 for their game with Johns Hopkins, and average attendance for home games exceeds 11,000. “The crowd comes to see the Gaits play,” says Simmons. “Many times the crowd leaves when they realize they’re out for the rest of the game.”