Merrill Lynch / Lacrossewear opened the Men’s Elite Championship scoring eleven straight goals, and that early, massive lead proved to be all they would need to claim victory in the 39th Vail Lacrosse Shootout. 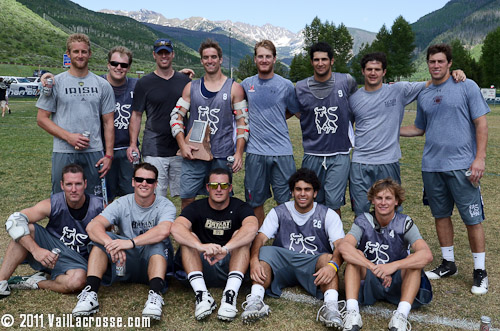 The Oysters were not able to execute the game plan that led them to success in the semi-finals, and once Merrill jumped out to a big lead the Oysters lacked the offensive fire power necessary to facilitate a comeback.

Several players had standout performances for Merrill; Rob Forester (Penn State ’09) went off finishing with ten points on nine goals and one assist. Forester was the main beneficiary Zach Howell’s (Duke ’11) nifty moves with Howell assisting Forester five separate times. Howell was also phenomenal in the Championship game, finishing with 9 points with three goals and six assists. The Offensive MVP of the 39th Shootout was Kyle Wharton (Johns Hopkins ’11) who is one of the most gifted attackmen to ever play in the Shootout. Wharton scored seven points in the final game on four goals and three assists; playing on the left side of the attack he was dominating all tournament.

Merrill’s defense and faceoff play was also stellar. Defensive MVP CJ Costabile (Duke ’12) was a force to be reckoned, dictating his will all over the field as a long stick midfielder. All Tournament Faceoff Man, Trevor Sipperly (Notre Dame ’10), finished the championship game winning 20 of 29 draws.

For the Oysters, All Tournament midfielder Alex Moore (St. Lawrence ’05) tallied two goals in the championship game. Despite the unrelenting Merrill offense, Goalie Ben Brown (Whittier ’09) had an impressive performance, finishing with 13 saves in three quarters of play.

The Denver Outlaws set a professional lacrosse attendance record on Sunday night as 27,184 people came to INVESCO Field at Mile High to see the annual fireworks game, shattering the previous record of 23,433 set on July 4, 2010.

Despite the rabid crowd, the Outlaws fell 15-12 to the Boston Cannons, dropping their second home game this season and falling to 4-2 all time on fireworks games.

The Cannons (6-1) now sit atop of the MLL standings going into All-Star weekend, edging the Outlaws (5-2), who were tied in first place entering the game.

Boston finished the game on an 8-1 run, evening the season series with Denver and winning its fifth consecutive game. The Outlaws handed the Cannons their only loss of the season on May 21, when they walked away with a 13-12 victory in Boston.

“I think we self-destructed in the fourth quarter,” Head Coach Tom Slate said. “Boston got the better of us tonight, but we’ve got to keep pushing forward.”

In the first half, Denver erased an early 3-0 deficit, using a 7-0 run to go ahead four goals going into halftime.

Boston responded in the second half, recording two early goals in the third quarter to make it 7-5.

Max Seibald halted Boston’s momentum when he scored his second two-point goal of the game with 11:25 to play in the third quarter, his third two-point goal in two games.