Starting the game with a 9-0 run, the U.S. Under-19 team raced to a commanding 19-5 win over England in the first semifinal of the 2011 Federation of International Lacrosse (FIL) U19 Women’s World Championship. 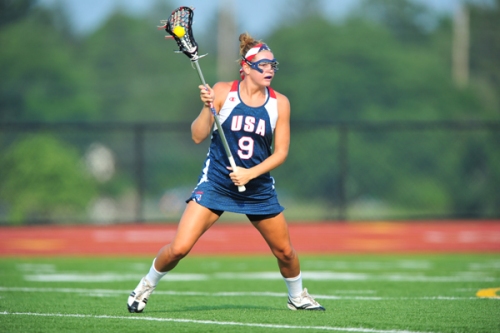 With the victory, Team USA advances to the championship game and earns a chance to defend its three consecutive FIL titles.

“It’s just the best feeling ever,” said midfielder and team captain Taylor Trimble, who score twice. “This is the day and the moment we’ve been waiting for this entire time. Tryouts were exactly a year ago, and we’re ready to really get this done and get the gold and bring it home.”

American goalie Kelsey Duryea made three saves in the first half and won player of the match for her efforts. Duryea has been a stalwart for the U.S. throughout the tournament but dazzled in today’s semifinal, where a few early saves iced the English attack. Her flashiest stop came when she was caught out of the crease in a two-on-one situation and had to leap backwards towards the ball, extending her stick in one hand to make the save.

Big plays aside, the American defense focused on systematically slowing Team England’s speedy attack. The U.S. beat England, 16-5, in the round robin, but defenders were unsatisfied with giving up a handful of fast-break goals.

“The last time we played them, they got some odd-man jumps on us, so we wanted to catch the slides early and try not to slide low to high, and to stop them from the beginning,” Duryea said.

Today’s five-goal output tied England’s tournament low from the round robin game, and two of their five goals came on free position attempts. No other defense held England to single digits throughout the tournament.