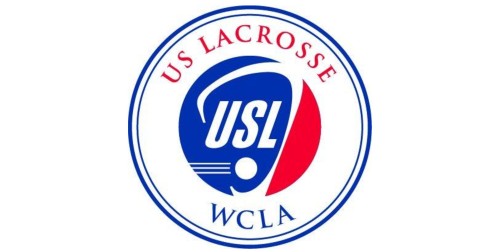 Colorado State was the unanimous No. 1 choice in the first US Lacrosse Women’s Collegiate Lacrosse Associates (WCLA) Division I poll released Friday. The Rams have scored 20 or more goals in three of their wins and have limited their opponents to nine goals or fewer in all five games… Fifteen of the top 20 teams also appeared in Lacrosse Magazine’s preseason rankings… USC Club rolled off eight straight victories in February after dropping its season opener to UC Santa Barbara on Jan. 26… The top 13 teams, plus Westminster and Cal Poly, all participated in the Santa Barbara Shootout Feb. 15-17… Colorado State and No. 6 Texas meet in Austin at 6 p.m. on Friday in a huge top 10 match-up that could shake up the rankings next week.

The club team’s success comes as the university has inaugurated its Division I varsity women’s program. Those Trojans opened against Northwestern — coach Lindsey Munday’s alma mater — on Feb. 9 and stand at 2-2 this season. Combined with USC Club’s “B” team, more than 100 women are playing organized lacrosse on the USC campus.

Lacrosse is booming these days in sunny Southern California, and USC Club (8-1) is riding a wave of momentum right into the WCLA Division I postseason picture.

The Trojans were busy in February. After an opening-day loss to UC Santa Barbara on Jan. 26 that was the team’s first significant work together since fall ball, USC ran off eight straight wins in February and is ranked No. 13 in the first coaches poll of the season.

“After that first game, I was pretty disheartened,” junior midfielder Madison Boutilier said. “We let that game go, keeping in mind what we did wrong, what we needed to become and took the rest of the season in stride.”

This is Boutilier’s first full season with the club team. She tried out for the team her freshman and sophomore years, but scheduling conflicts forced her to focus on school and drop lacrosse. Boutilier spent a semester last year practicing with the varsity squad, but couldn’t make the time commitment to play.

This year, the timing worked out.

The eight wins match the most the program has ever won in a single season — with two months left to play in the regular season.

“I’m ready to make USC Club lacrosse history with my team, and I think this is the year that we’re going to do that,” Trojans fifth-year goalie Madison Aguirre said. “We decided in the summer that we were going to be a playoff team.”

USC typically frontloads its schedule to work around the school’s spring break. It works out great when the team is doing well, but Aguirre said it has been deflating in past years when the team has nearly played itself out of playoff contention by March 1.

The Trojans were 6-5 in February last season and finished 7-8. Aguirre said last year’s team wasn’t ready to even consider a run at nationals. 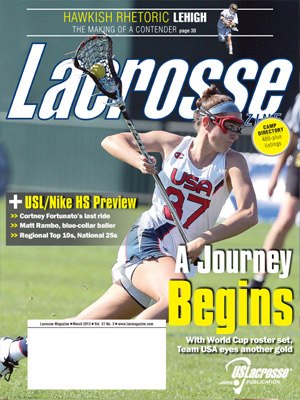 COVER STORY: A Journey Begins
Katie Schwarzmann is the youngest player on the 2013 U.S. Women’s World Cup team which chases another gold this summer.
Hawkish Rhetoric
The game has changed at Lehigh, where one of the original member schools in the NCAA has finally grown up in the land of Division I.
High School Preview
Our 19-page section includes national preseason top 25 rankings, regional top 10s, and features on top seniors Cortney Fortunato and Matt Rambo.
Finding Her Voice
Sarah Albrecht is no stranger to the world stage, a role she embraces as one of 10 veterans from 2009 who are back in the fold for the 2013 World Cup.
Everything But the Kitchen Sink
Michelle Tumolo brings big energy and a creative attitude to Syracuse, where she’s hoping for more than a second place finish.

The Fresno State lacrosse team hits the road for three straight away games, starting with a non-conference competition against La Salle. The two teams face off on neutral territory, playing in San Diego on March 5 at 4 p.m.
This will be the first ever matchup between Fresno State (1-0) and La Salle (3-1).
Upon returning to Fresno, the `Dogs have two days of practice before heading to the mile high city where they will first face Mountain Pacific Sports Federation opponent, Denver on March 9 at 10 a.m. PT.
“I think our trip to Denver will be a great experience to play a very seasoned team, as well as Winthrop who is a brand new program this year,” said head coach Jessica Pausewang.
The team then turns around and plays the next day against a first year team, Winthrop on March 10 at 10 a.m. PT.
After three straight away games the `Dogs return to Bulldog Stadium for their first home game of the season, hosting MPSF opponent California on March 19 at 5 p.m.

Fresh off its first victory of the season, the Stanford women’s lacrosse team will hit the road for its first away game as it takes on No. 13 Ohio State at 9 a.m. (PT) on Saturday, March 2 in Columbus, Ohio.
Stanford (1-1) split its first two matches on the season, dropping its season opener to No. 9 Notre Dame, 12-10, and earning an 18-13 victory over Harvard.
Stanford is 5-4 all-time against Ohio State, losing its most recent meeting in 2012 by a 14-10 decision. The Cardinal was victorious in its last trip to Ohio State on March 5, 2011, when it knocked off the Buckeyes, 17-5. Ohio State (2-2) is coming off a 13-8 loss against Notre Dame. The Buckeyes return 20 letterwinners – including nine starters – to a team that went 11-6 in 2012.
Stanford has been strong and balanced on offense through its first two games, with 12 different Cardinal scoring goals. Stanford has recorded a .491 shot percentage after converting 28 of 57 shot attempts. The Cardinal is averaging 14.0 goals per game, while holding opponents to 12.5 per game.
After playing just five games in 2012 due to injury, junior Rachel Ozer has been an offensive force for Stanford, leading the team in points (nine) and assists (five). Ozer has already tied her goal total (four) and exceeded her assist total (two) from five matches in 2012.

The Saint Mary’s lacrosse team returns to Moraga this week to host UC Davis on Friday at 6 p.m. in the Gaels’ home opener.
Saint Mary’s (0-2 Mountain Pacific Sports Federation) played its first two matches of the season last weekend, dropping contests against San Diego State and USC.
Leading the way offensively on the trip was the trio of Amanda Cross, Jillian Chong and Krista Morgan.
Cross found the net twice and assisted on two more goals to tally four points between the two games. Chong led the scoring charge against USC with three goals, and Morgan scored two goals against San Diego State.
Friday’s match will be the first this season in MPSF play for UC Davis (1-1). The Aggies won their last match, defeating host Stetson 18-4 on Sunday.
In the win over the Hatters, Davis got three goals apiece from seniors Stephanie Guercio, Elizabeth Datino and Hannah Mirza. Datino also had four assists, tying the UC Davis all-time record of 80. She led the NCAA in points per game in 2012.
After hosting Davis on Friday, the Gaels make the trip through the Caldecott Tunnel next Tuesday to take on Cal at 4 p.m. They’ll then return to SMC to host Marquette on March 10 at 1 p.m.