The No. 7/7 University of Denver men’s lacrosse team outlasted the No. 8/11 Ohio State Buckeyes 10-9 on the road at Jesse Owens Memorial Stadium in Columbus, Ohio on Saturday afternoon in front of 1,745 fans. The win improves the Pioneers to 5-1 on the season, 1-0 in ECAC play and also extends their winning streak to four games. Ohio State falls to 4-1 on the season, 0-1 in ECAC play.
“I am so proud of the way our teams responded to what we asked of them the whole week leading up to this game,” said head coach Bill Tierney. “We played a little sluggish to start, but responded in the second and third quarters. We knew this was going to be a tough game because Ohio State is a great team with a high-powered offense.”
Senior Eric Law (Centennial, Colo.) led the Pioneers with three goals and an assist, while senior Cameron Flint (Georgetown, Ontario), junior Jeremy Noble (Orangeville, Ontario) and sophomore Sean Cannizzaro (Cazenovia, N.Y.) all finished with two goals each.
Sophomore Eric Adamson (Anaheim Hills, Calif.) tallied two assists, while senior Colin Scott (Ridgefield, Conn.) scored one goal. Sophomore goalie Ryan LaPlante (Fort Collins, Colo.) made eight saves and recorded the win in 30 minutes of action, while junior Jamie Faus (Lakeville, Conn.) made 10 saves and allowed only four goals in a half.
Ohio State’s top scorer Logan Schuss was held to just two goals and an assist, while Michael Italiano also finished with two goals. Goalie Greg Dutton made nine saves, while allowing 10 goals to record his first loss of the season.
Denver held the advantage in saves, 18-9, while Ohio State led the way in shots (38-30), ground balls (26-20) and face-offs (16-of-23 to 7-of-23).

A late surge from the No. 2 Notre Dame men’s lacrosse team fell short and No. 15 Hofstra prevailed with an 8-7 victory on Saturday afternoon at Arlotta Stadium.
The game was tied, 4-4, at halftime and Notre Dame (3-1) opened the second-half scoring on a goal from senior midfielder Tyler Kimball midway through the third quarter.
Hofstra (4-1) responded with four unanswered tallies to claim a three-goal lead (8-5) by the 9:55 mark of the fourth quarter. Adrian Sorichetti began the surge with 3:39 left in the third quarter and his teammate Mike Malave scored just over a minute later to give the Pride a 6-5 lead by the end of the third period.
“Our execution was not very good at either end of the field in the third quarter,” Notre Dame head coach Kevin Corrigan said. “I can’t think of two really good possessions that we had in the third quarter. If you’re going to give away possessions, you’re going to put yourself in a position like we were in late in the game.”
The Hofstra run continued with goals from Tyler Begley and Sam Llinares early in the fourth quarter.
Notre Dame’s Conor Doyle scored his third goal of the afternoon with 3:34 left to make it a two-goal contest (8-6). The three goals matched a career high for the sophomore attackman. Irish senior attackman Sean Rogers sliced the Pride lead to one (8-7) with 36 seconds remaining. Notre Dame had the game’s final possession, but the Irish were not able to score.
“We execute great at the end-of-game situations,” Corrigan said. “Our guys had poise and there was no quit in them. They are competitive right until the last whistle. That’s what they’ve done all year and that’s who they are, but we can’t keep putting ourselves in that situation.”
Doyle opened the game’s scoring just over two minutes into the contest. Hofstra answered back with two goals from Torin Varn and another tally from Brian von Bargen to grab a 3-1 lead by the 5:23 mark of the first quarter.

The Gauchos took on the 8th ranked University of Colorado, Boulder in the nightcap on the opening day of the inaugural Santa Barbara International Friendship Games and won going away with a monster second half. The score was close at halftime with UCSB slightly ahead of the Buffalos 9-8. Then the Gauchos outscored Colorado 11-4 in the second half for the final 20-12 result. It was the fifth straight win for 5th ranked UCSB.

Colorado tied the Gauchos 10-10 early in the second half. To that UCSB responded with a 6 goal run over a 10 minute stretch that broke open the game. At the end of the run the Gauchos led 16-10 with 9 minutes remaining. The Buffalos got a goal to pull within 5 but UCSB outscored them 4-1 in the final 6 minutes to finish the game and put them away. The score over the last 22 minutes of the game was 10-2 in favor of the Gauchos.

UCSB outshot Colorado 29-17 and junior Blair Evans (Salinas, CA) had a career best day on offense, leading all scorers with 8 goals. Evans netted her 8 goals on 9 shots, shooting 88.9%. It was a balanced effort all around among UCSB players with 8 Gauchos contributing to the offensive outburst. Sophomore Lindsay Alex (Tustin, CA) had 5 assists. The game marked the return of two-time All-American defender Emilia Norlin (Mill Valley, CA) who had missed the four previous games with a hamstring strain. Norlin played about 25 minutes subbing in off the bench and brought some depth back on defense for UCSB.

“Getting Emilia back on the field is really nice for us and it came at a good time but we still used her sparingly just to make sure her hamstring can continue to heal and get stronger.”

The game between UCSB and Colorado wasn’t an international game but preceding it were three games involving Japanese university teams, Meiji and Nihon.

UCSB improved to 9-3 overall while Colorado dropped to 3-3. The Gauchos have a weekend off after this Friday night game before playing another Friday night lights game when they host 18th ranked Cal Poly SLO on March 15th at 8:00pm. The SB International Friendship Games continue on Saturday with Meiji and Nihon taking on UCSB ‘B’, SBCC and Cal State Fullerton in friendlies. Mixed in are a national match-up between NCAA DIII teams Chapman University and Colorado College and a WWLL match-up between Cal State Fullerton and SBCC.

The Sonoma State Seawolves take on the CAL Bears in an important lacrosse match in the WCLL. It’s a tight game and after CAL goes up 8-6 in the third quarter, Sonoma storms back scoring the last three goals to upset CAL 9-8. CAL’s attack, Sean Hayden and Dan Cohen score 7 or CAL’s 8 goals while Sonoma has a balanced attack with their midfield carrying most of the weight.

Johns Hopkins Senior Zach Palmer goes behind the back against UMBC. 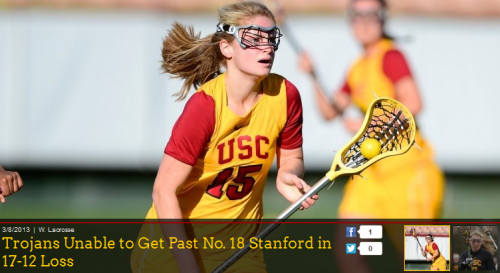 A strong second half in which the USC women’s lacrosse team (4-4, 2-1 MPSF) outscored No. 18 Stanford (3-2, 1-0 MPSF), 8-6, wasn’t enough as the Cardinal claimed a 17-12 victory on Friday, March 8, on Maloney Field at Laird Q. Cagan Stadium. Freshman attack Caroline Cordrey scored on each of her four shots and freshman attack Caroline de Lyra led the team with five points on three goals and two assists.
Freshman midfield Amanda Johansen had a pair of goals and an assist and recorded a team-high five draw controls. Freshman midfield Paige Bonomi added two goals and picked up three ground balls in the game. Freshman midfield Haleigh Dalmass scored a goal, grabbed three ground balls, and a draw control, and led the team with two caused turnovers.
Defensively, freshman defense Kelsey Dreyer had a team-high four ground balls and picked up three draw controls. In the cage, freshman Liz Shaeffer recorded nine saves on the day.
Anna Kim had four goals, an assist, and five draw controls to pace the Cardinal effort. Julia Burns also scored four times for Stanford while three others scored a pair of goals, each. The Cardinal defense got a big boost from Elizabeth Adam who caused five turnovers and recorded four ground balls in the game.
Stanford claimed a 3-0 lead in the first five minutes of the game as three different Cardinal players scored, but de Lyra had an answer as she went to goal unassisted to put the Trojans on the board. Stanford replied with two more goals–one by Rachel Ozer and the other by Burns–to create a big 5-1 lead.