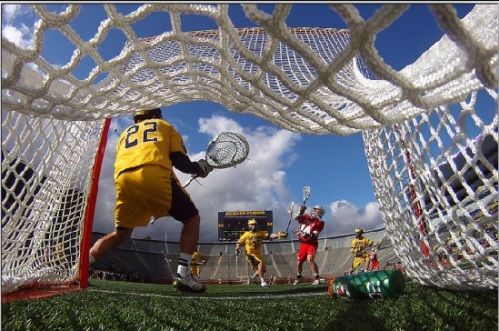 The No. 13-ranked Ohio State men’s lacrosse team claimed the 2013 Creator’s Trophy after downing Michigan, 17-8, Saturday in Michigan Stadium in Ann Arbor, Mich. The annual trophy goes to the team with wins against the other Big Ten Conference schools that sponsor men’s lacrosse. Ohio State downed Penn State, 10-9 in overtime, March 2 and then clinched the trophy with the win over the Wolverines. Ohio State improves to 8-3 on the season and is now 3-2 in the ECAC after the league victory over Michigan (0-12, 0-6 ECAC).
“It was a good team win,” Nick Myers, Ohio State head coach, said. “We were able to check off one of our team goals, which was to bring the Creator’s Trophy home to Columbus. The men realize the next goal is to qualify for the ECAC tournament. That starts with our preparation for a tough game at Air Force next Saturday.”
In the victory, senior Logan Schusshad five goals, a career-high five assists and a career-high tying 10 points and became the all-time leading goal scorer in Ohio State history. Entering the game two goals back of Joel Dalgarno, who scored 126 from 2006-09, Schuss scored twice in the first six minutes of the game to tie the record and then broke the mark with 54 seconds left in the opening stanza. Schuss now has 129 goals as a Buckeye, along with 82 assists and 211 points. He has a team-best 27 goals, 19 assists and 46 points this season and has extended his scoring streak to 56 games.
“I am proud of the way Logan stepped up today,” Myers said. “Becoming the Ohio State lacrosse all-time leading goal scorer is a special achievement and one I know he is excited about sharing with his teammates.”
In the win, sophomore Turner Evans had a career-best four goals, while classmate Jesse King had two goals and three assists for five points and freshman Carter Brown netted a hat trick. Junior goalie Scott Spencer had 10 saves in the Buckeye cage. The Buckeyes won 22-of-28 faceoffs, led by senior Trey Wilkeswho won 13-of-18 and had a team-high six groundballs.

Senior Cameron Flint (Georgetown, Ontario) scored the game-winner in overtime to propel the No. 3/4 University of Denver men’s lacrosse team to a 13-12 win over the No. 5/6 Loyola University Greyhounds on Saturday afternoon in front of 3,285 fans at Ridley Athletic Complex in Baltimore, Md. The win is the Pioneers’ fifth straight and bring their overall record to 10-2 on the season, 5-0 in Eastern College Athletic Conference action.
“This was a really tough game and a great deal of the credit needs to go to Loyola, because they never gave up and battled against us right to the last second,” said head coach Bill Tierney. “I thought out team played an outstanding first half, and that Loyola played an outstanding second half. I’m proud of the way our team responded when it came time to head into overtime. Our whole team stepped up when we needed them to and that is a mark of a good team.”
Flint finished the day with four goals, his second straight four-goal game, while also finishing with three ground balls. Sophomores Eric Adamson (Anaheim Hills, Calif.) and Wesley Berg (Coquitlam, B.C.) both finished with two goals and two assists, while senior Eric Law (Centennial, Colo.) netted two goals.
Also scoring for Denver was freshman Gordie Koerber (Baltimore, Md.), senior Taylor Young (Littleton, Colo.) and sophomore Sean Cannizzaro (Cazenovia, N.Y.) with one goal each. Sophomore Garret Holst (Fishers, Ind.) recorded two assists, while senior Chase Carraro (Louisville, Ky.) finished with a season-high 16 ground balls and won a season-high 18-of 26 face-offs.
Sophomore goalie Ryan LaPlante (Fort Collins, Colo.) made a career-high 18 saves in his first complete game since the Pioneers fell to Penn State (02/17/13). LaPlante is now 7-1 on the season and has made 96 saves.
Loyola got on the board first to start the game, but the Pioneers answered with four straight goals from Young, Law Berg and Flint to end the first quarter up 4-1.
After the Greyhounds scored to open the second quarter, the Pioneers scored two straight as Flint and Berg both netted their second goals of the game to put DU up 6-2. Loyola answer with a goal from Davis Butts with 5:25 left in the second quarter, before Denver closed out the half with a goal from Flint, his third, and a goal from Law with five seconds remaining. The Pioneers took an 8-3 lead heading into the break.
After over 10 minutes of scoreless action to open the third quarter, Loyola score with 4:22 remaining as Mike Sawyer and scored off a pass from Justin Ward. Denver answered 21 seconds later as Cannizzaro scored his third goal of the season to put DU up 9-4. Loyola scored the final three goals of the quarter to cut into the Pioneers’ lead, 9-7.
Adamson and Koerber both scored within a minute of each other to open the fourth quarter and give DU an 11-7 lead. However, Loyola scored two more minutes later to make it 11-9 with 9:20 left to play. Adamson scored his 20th of the season with 8:40 left to play to give the Pioneers a three-goal cushion, but the Greyhounds scored three straight to tie the game at 12-12 as the final minutes ticked off the clock to force the game into overtime. 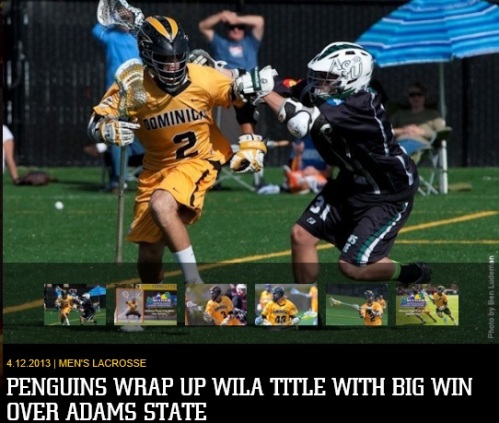 The victory by the Dominican University of California men’s lacrosse team on Friday was more than a big win. It was a historic one.
With their 20-6 triumph over Adams State of Colorado, the first-place Penguins (7-4/5-0) clinched their first Western Intercollegiate Lacrosse Association title. In addition, the victory was the fifth consecutive win by the Penguins, the longest winning streak in the lacrosse program’s nine-year history at Dominican, and their 20 goals in the game matched a school record.
“It feels good, especially the way we played. That was one of the better games we played this year,” said Dominican head coach Ned Webster, who received a celebratory Gatorade bath when the game ended. “We have won games this year and I haven’t felt entirely good about them. I feel pretty darn good about the way we won today.”
Senior Cam Evangelho scored a career-high six goals and Dalton Copeland added five goals as the Penguins overcame a goal by the Grizzlies(2-7/1-3) just 19 seconds into the game to overwhelm Adams State with shooting efficiency. Dominican scored six goals on its first seven shots and twice in the game had streaks when they scored seven unanswered goals. The Penguins’ 20 goals came on their first 31 shots in the contest at Kennelly Field in John F. Allen Athletics Complex.
“We’re looking for high percentage shots and I felt like the reason we scored the way we did was simply because we were patient,” Webster said. “We took the right shots.”
Evangelho and Copeland had seven shots apiece. Joining them in the scoring column were Jake Fritz (three goals), Conor Doyle (two goals) and freshmen Grant Clifford, Trevor Garner and Cody Bernstein who each contributed a goal. Bernstein also had five assists, giving him a team-best 40 points and WILA-high 21 assists this season. Sophomore Kevin Powers, the only player on the Penguins to record at least one point in every game this season, had three assists and also teamed with Copeland to dump the Gatorade on Webster.
Four years ago, when they entered Dominican together, Copeland and Evangelho probably didn’t see a championship on the horizon. The Penguins had a record of 6-9 before they signed up and that 2009 season included some lopsided losses.