Macnee is allowed to make this transformation without much blowback because of his accomplishments for the Buffs. Colorado has made the MCLA tournament the first three years of Macnee’s tenure and, at 14-0 heading into this weekend’s game with top-ranked and defending national champion Colorado State, it is a lock for Greenville once again thanks in large part to his presence. 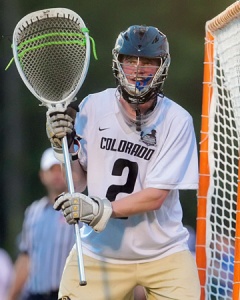 Mild-mannered computer science nerd off the field, Brad Macnee morphs into a completely different guy when he steps between the pipes for second-ranked Colorado. Photo by Cecil Copeland

Colorado head coach John Galvin has two standing rules he likes to enforce during his practices: no cursing among the players and no smiles spreading across his face.

Galvin’s no prude, he just feels swearing represents a certain lack of discipline, something that his entire Buffalo program is predicated on. He’s no grouch, either, but he likes to keep a businesslike demeanor when his second-ranked program gets ready for games in the MCLA. As much as he tries to adhere to these cornerstones, there are certain occasions when he’ll allow the rules to be bent, and typically they involve senior All-American goalie Brad Macnee.

“At practice, he is kind of a fiery guy,” Galvin said of Macnee. “Brad probably has a little more leeway, not because he’s Brad Macnee, but he has been there before and he’s trying to fire up our guys. He says some things that will make me smirk. He says some things to our guys to get them fired up. He’s serious, but I find it pretty amusing.”

A case in point was a couple of weeks ago when the Buffs were doing their walk-through prior to a game at Cal Poly. One of the long-stick middies operating in front of Macnee had his foot stepped on, stopped playing and said that it really hurt. It wasn’t anything serious, just one of the daily occurrences in the life of a backliner.

After a couple of seconds, Macnee asked in tone of faux concern, “Are you OK, [expletive]?”

“It wasn’t yelling. It was just like me and you talking right now. It was almost like he wanted to give him a hug,” Galvin said. “But everyone just cracked up. Just the demeanor and way he said it, he was serious. There was no smile. The LSM kind of looked at him and couldn’t say anything, and everyone was looking at me to make sure I wasn’t mad, but I was kind of cracking up. It loosened up the mood. That’s kind of his M.O.”

Macnee is definitely an interesting bird when it comes to lacrosse. Before games, Macnee will have his earphones on with the music cranked — Galvin described it as “death metal” — and immersed in almost a catatonic state. And if there are any screw-ups in front of him, whether during a game or practice, Macnee is not afraid to let his teammates hear it.