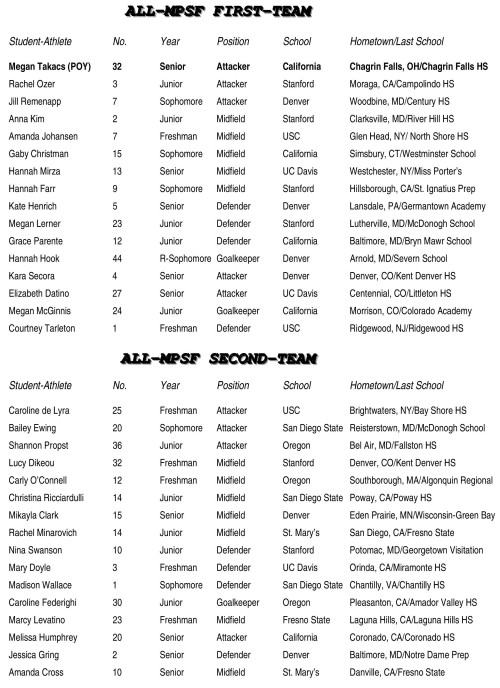 After leading for nearly all of its American Lacrosse Conference Tournament semifinal showdown with No. 8 Penn State, No. 4 Northwestern nearly saw its hopes for a return to the tournament title game evaporate as the Nittany Lions had a chance to break an 8-8 tie in the final minute of regulation. But clutch plays by NU’s senior leaders down the stretch lifted the Wildcats to a 9-8 overtime win and clinched a berth for the ‘Cats in Sunday’s championship game against No. 2 Florida.
Returning national player of the year Taylor Thornton caused a turnover at the defensive end to deny Penn State at the end of regulation, while fellow senior co-captain Amanda Macaluso provided the game-winning goal by wrapping the crease to score with 45 seconds left in the first of two overtime periods.
Thornton — who finished with three caused turnovers on the evening — and Macaluso tied as Northwestern’s high scorers for the game with two goals apiece.
Senior Gabriella Flibotte helped NU control play with a career-high seven draw controls, including the first two in overtime. Flibotte also added a goal and a trio of caused turnovers and now claims sole possession of third on Northwestern’s single-season caused turnovers record list with 39.
The Wildcats advanced to the ALC Tournament title game for the seventh time in the seven-year history of the event and will look to reclaim the league championship from a Florida squad that broke NU’s five-year string of titles from 2007-11. Opening draw Sunday in Baltimore is set for 11 a.m. CT.
Friday marked the first overtime game and victory for Northwestern since a win over Ohio State at Gillette Stadium on March 31, 2012.

Led by the five-goal performance of senior Jack Rice (Baltimore, Md.), Villanova defeated the Georgetown Hoyas 15-12 on Thursday evening in the BIG EAST Semifinals in front of a crowd of 2,517. The Wildcats will now advance to the championship game and face No. 2 seeded Syracuse on Saturday, May 4th at Noon. The winner of that contest will earn an automatic berth into the NCAA Tournament slated to begin next week.

Following his five-goal performance, Rice is now in sole possession of second place on Villanova’s all-time leading goal scorers list with 126 career goals. He is just two away from tying Chris Sullivan’s 128 scores and three away from being the most prolific goal scorer in Villanova lacrosse history. The contest also marked the 20th career hat trick for Rice, who’s scored at least four goals in Villanova’s past three games.

Saturday’s contest will also mark the first-ever appearance for Villanova in the BIG EAST Championship contest.

Head Coach Mike Corrado stated following the contest, “We are really excited about coming out on top tonight.  It was an interesting game, very up-and-down and it was out of control at times.  We made enough plays to win and that gives us an opportunity to play on Saturday, which was the goal coming in.  We didn’t play great the whole game but the guys did enough to give us a chance to play Syracuse in the championship game.”

With the calendar flipped to the postseason, Penn turned to its trademark stifling defense to earn a third trip to the Ivy League Tournament championship game via a 10-5 win over Cornell at Franklin Field.

The top-seeded Quakers benefitted from 12 Lucy Ferguson saves and eight caused turnovers, thrice holding the Big Red to goalless droughts of over 14 minutes in the game. Ferguson split her saves evenly between the two halves, highlighted by three in succession over a span of 1:51 after the Big Red had taken an early 1-0 lead.

After Cornell opened the scoring, Penn went for the next three goals, opening a 3-1 lead midway through the first half. Meredith Cain – who is arguably the most dominant player in Ivy League Tournament history with 11 goals and 14 points over six career games – scored on a free position 7:13 into the game to tie proceedings at 1-1. Five minutes later, Tory Bensen would give the Quakers a lead they would not relinquish on a low shot following a dodge from behind the net.

Just passed the midway point of the first half, Courtney Tomchik scored her only goal of the game on a pretty double dodge from the top of the zone. After faking out her second defender, Tomchik shot on the fly to give Penn a 3-1 lead.

For the second time in as many years, the Dartmouth women’s lacrosse team will play in the Ivy League Tournament Championship Game. This time it will be thanks in large part to the play of senior Hana Bowers in Friday’s semifinal match-up against Princeton at Franklin Field.

Bowers, a 2013 First Team All-Ivy League player, scored a free-position shot with 1:22 left in double overtime that gave her team an 11-10 victory over the Tigers, sending the third-seeded Big Green to the finals Sunday at noon against the hosts and top seed from Penn.

The final game of the weekend will serve as a rematch from last year’s championship that Dartmouth won, 6-4, over the Quakers. Penn advanced to Sunday’s tilt with a 10-5 victory over Cornell in the second semifinal. In four seasons of Ivy League Tournaments, Penn and Dartmouth have played for the crown three times (2010, 2012, 2013).

The game-winner was Bowers’ fifth of the day and her sixth point after also adding an assist on the first marker of the afternoon.