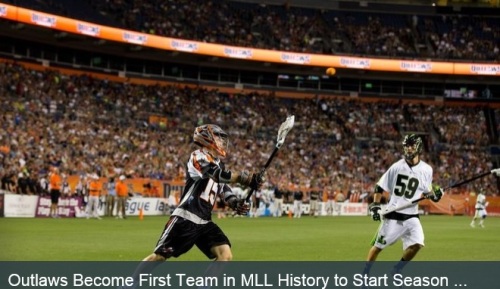 The Denver Outlaws’ Mile High Fourth of July was a night of breaking records.
With their 16-7 win against the New York Lizards, the Outlaws became the first team in Major League Lacrosse to open a season with 10 wins, and their attendance of 31,019 is the highest in league history. Denver set the previous outdoor professional lacrosse attendance record, boasting 30, 128 fans at their 2012 Fourth of July game.
New York controlled the pace of play in the opening minutes of the game, jumping out to a 2-0 lead 1:11 into the first quarter. Denver’s Drew Snider answered to bring the Outlaws within one, but New York notched back-to-back goals to take a 4-1 lead with 8:09 remaining in the first. Denver tied the game by closing out the period on a 3-0 run, capped by a two-point goal by Jeremy Sieverts with less than ten seconds left on the clock.
Matt Bocklet kicked off the second-quarter scoring with his first goal since 2011 to give the Outlaws their first lead of the game. Drew Snider and Chris Bocklet followed that up with tallies to put Denver up 7-4 at the half. The Outlaws kept the Lizards off the scoreboard, extending New York’s scoring drought to 23:08 and marking the third straight game that Denver has held a team scoreless for an entire period.
“We made some mistakes in the first quarter, and things went New York’s way,” Outlaws General Manager Tony Seaman said. “But it’s a 60-minute game, and we shut them out in the second quarter.”
The Outlaws continued their offensive onslaught in the third quarter, outscoring the Lizards 4-1 behind two goals from Brendan Mundorf. Denver kept its run going in the fourth, rattling off four straight goals. Lizards rookie Rob Pannell ended the Outlaws’ run with two goals, but it was too little, too late. Will Mangan iced Denver’s 16-7 victory with a tally in the last minute of play.