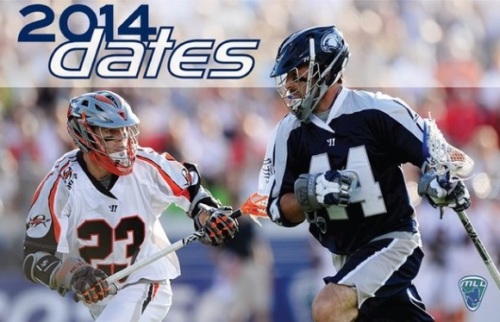 Major League Lacrosse, the premier outdoor lacrosse League, announced key dates for the 2014 season including a change to the playoff format.
New next season will be a change in the playoffs with Championship Weekend moving to a single final game.
“We have decided to change the format next year to reward the fans and the teams with the better record and allow them to host a playoff game in front of their home crowds,” said MLL Commissioner David Gross. “This will ensure that the top two teams in the League have a true home field advantage.”
2014 will begin with the Collegiate Draft being held in Philadelphia, Pa., on Friday, January 10, at the US Lacrosse National Convention, presented by Champion. MLL coaches and general managers will descend on the Philadelphia Marriott Downtown to select the best college players to beef up their rosters.
Fans won’t have to wait long after that to see their favorite teams play as the regular season will begin the weekend of April 26 and end the weekend of August 9.
The semifinal rounds will be played the weekend of August 16 at the home of the two higher seeds, giving the two teams with the best season record a home field advantage, and rewarding their fans with a playoff game.
The Championship Game will be played August 23 at a location to be announced at a later date.

Announced as part of the University’s “On the Move” Foundation campaign, which was unveiled Thursday, the athletics expansion and enhancements includes not only the addition of six competitive sports, but a new soccer and lacrosse stadium, complete with a synthetic turf field, 600-seat grandstand, public restrooms, a concession area, press box, lobby, locker rooms, and offices.

“The stadium will look a lot like the ThunderBowl and be located right next door to it,” Dan DeRose, Chair of the CSU-Pueblo Foundation, said. “The soccer and lacrosse facility will be the nicest collegiate soccer facility in the state of Colorado.”

Also, a $2.5 million boost to the CSU-Pueblo Athletics scholarship fund is part of the campaign.

“Not only are student-athletes the best students, evidenced by their higher GPA and retention rates, but they also represent the University in the community,” DeRose said.

“This is another exciting day in the University’s history,” CSU-Pueblo Director of Athletics Joe Folda said.  “The addition of these programs is a final step in this University becoming ‘The Jewel of the South’ in higher education in the State of Colorado.”

Approximately $5 million from the $25 million “On the Move” campaign will be used for athletics expansion, just one piece of a campaign that includes a major renovation to the Occhiato University Center, while another $15 million will be used to boost the University’s scholarship offerings for the general student population.

“Our goal of this campaign is to give more young men and women the opportunity to have the transformational experience of receiving a degree from a higher education institution,” CSU-Pueblo President Lesley Di Mare said.

For more information on the CSU-Pueblo athletics expansion or its new sport offerings, visit GoThunderWolves.com or call (719) 549-2711.

“Experience.  We knew what it took to win,” MLL Championship Weekend MVP John Grant Jr. said. “We have been here before.  Our composure and leadership definitely stepped

through today against a younger team. Hats off to Charlotte, they played an excellent weekend and they’re going to be a team to reckon with in the next couple of years. You know, whether we played our best game or not, that doesn’t matter now—we played well enough to win.”

Grant’s four-goal performance helped pace the Bayhawks to victory, as the Peterborough native was named the tournament’s most valuable player.

“This was a big win for us,” says Grant.

The victory marks Grant’s fourth MLL championship, winning the title in 2008 with Rochester Rattlers, the Toronto Nationals in 2010 and with the Bayhawks in 2012.

“The first win is always the biggest,” he says. “The second was huge, because it came after my injury and this one was big because everyone had counted us out.”

The Bayhawks had an up-and-down season, finishing with a 9-5 record, but Grant says the team stepped up when they needed to.

“We stayed the course and dug down when we needed to and accomplished what nobody thought we could do this year,” he says. “People said we were too old and didn’t have the team to do it this year, but in the end we found a way.”

The 39-year-old says it was the team’s veteran experience that helped them, as they beat the undefeated Denver Outlaws 17-14 in the semifinals.

Grant was unstoppable in the tournament, and deadly accurate, playing the role of a sharp shooter, scoring six goals on just seven shots.

“I tend to usually take more shots in order to score,” he says. “But when I had the chance I was able to put the ball in the back of the net.”

The victory helps make up for the disappointing finish to the season Grant had with the Peterborough Lakers, after losing to the Brooklin Redmen in game seven of the Major Series Lacrosse semifinals at home.

All In Lacrosse was founded with a single goal in mind: To elevate the game of lacrosse one athlete at a time. The All In Team is dedicated to helping each individual grow to his or her full potential, both on and off the lacrosse field.
Through private and small group instruction, and camps and clinics, we emphasize the quality of our product over growth. We let our services speak for themselves and we understand that growth can only occur when you have the right people in place.
Our goal is your goal. That is why we make sure we do everything in our power to ensure our athletes are equipped with the right tools to succeed.
http://www.allin-lacrosse.com/in/

In just its second year in existence, the USC women’s lacrosse program has secured one of the nation’s top recruiting classes under head coach Lindsey Munday. Inside Lacrosse ranked the Trojans’ incoming freshman class 10th in the country. From coast to coast, the incoming Women of Troy represent the states of New Jersey, New York, Georgia, and California.
“I could not be more excited to welcome our 13 freshmen to the Trojan Family,” said Munday. “This group is extremely talented and will be a great addition to our current team. In addition to the talent, this group brings enthusiasm and passion that is unparalleled. This group is `all in’ and committed to a vision, a belief, of where they see our program in the future. That belief is going to fuel them and the rest of this team to new heights.”
In short order, USC has shown that it can and will compete for the country’s top talent against the sport’s traditional powers. Defending NCAA champion North Carolina’s incoming class received the nod as the top class and was followed by 10-time champion Maryland, three-time champ Virginia, Florida, and Notre Dame in the top five. Duke, Harvard, and Vanderbilt’s classes ranked sixth, seventh, and eighth, respectively. Conference rival Stanford’s class earned the nine spot followed by USC’s stellar class of incoming players.
The Trojans will welcome four freshmen, each, from New Jersey and California, three from New York, and a pair from Georgia. Among USC’s recruits is the nation’s 24th-rated prospect: midfielder Alex Moore (Millstone Township, N.J./Allentown HS). The Trojans also landed three players who were named to the Inside Lacrosse watch list including midfielder Michaela Michael (Hillsborough, Calif./Menlo School), midfielder Shannon Nugent (Medford, N.J./Shawnee HS), and attacker Annie Ruland (Milton, Ga./Milton HS).
USC’s incoming class includes state champions, all-time record holders, team captains, all-league, all-conference, all-state selections, and most stunningly 24 US Lacrosse First Team All-America selections. Most recently, Michael was named to the Lacrosse Magazine’s Top 15 Freshmen to Watch.
“The players in our recruiting class have been extremely successful during their high school careers,” said Munday. “We will need them to use those experiences here at USC. They are all leaders in their own right and I look forward to seeing that leadership from them even as freshmen. I’m very excited to see how this group will gel with our returning players and I know that they will immediately impact our program.”

Led by Championship Weekend MVP, John Grant Jr., the Bayhawks grabbed 10 goals and played a strong defensive game. They have now earned the Championship title in three of the last four seasons, and their fifth club title.

The game opened with a faceoff win for Chesapeake’s Adam Rand, but it was the Hound’s that struck first with a goal from Ryan Young, a minute and 11 seconds into the quarter.  Adam Ghitelman made a couple of stops as the Bayhawks tried to keep the pressure on before the 2012 Championship MVP, Ben Rubeor put Chesapeake on the board, sending one into the net. Veteran attackman, Casey Powell would add to this, putting the Bayhawks up 2-1. After Charlotte went 1-5 in shots on goal, Young grabbed another one to even up the game. This was only temporary as Grant came in with the pick and roll to give the Bayhawks the 3-2 advantage.

The score would remain at 3-2 until the 3:43 mark in the second quarter, when Grant would take the feed from Powell to score again, making it a 4-2 difference. Charlotte failed to take advantage of a man-up situation and just couldn’t get a shot off. Matt Danowski was the only Hound to take a shot on goal in the quarter. To close out the half Grant slashed another goal with 1.1 seconds on the clock to head into halftime up 5-2 and complete a natural hat trick.

The third quarter would see a change in pace, with the ball traveling up and down the field, the type of lacrose tailored for a young, Hounds team, but still they struggled to compete. Grant would again send the ball sailing past Ghitelman, carrying his team to a 6-2 lead. The Hounds then turned it on, scoring two goals 46 seconds apart, one from rookie Jake Tripucka, and Young completing his hat trick. With a 6-4 lead, the Bayhawks kept the Hounds scoreless the rest of the quarter. Drew Westervelt and Matt Mackrides would contribute to the Chesapeake lead, making it 8-4 before heading into the final 15 minutes of the MLL season.

The Chesapeake Bayhawks defeated the Hamilton Nationals 13-12 in a back-and-forth game to reach the MLL Championship Game, at PPL Park in Chester, Pa. on Saturday. The Bayhawks will look to repeat as champions against the fourth seeded Charlotte Hounds.

Michael Kimmel lead the way for the Bayhawks with four points, While Ben Hunt and John Grant Jr. added three of their own in an intense game that featured six ties and four lead changes. Joe Walters paced the way for the Nationals and had a game-high five points on two goals and three assists.

Kimmel got the defending champs on the board first with a two-point rip that beat Brett Queener from deep. However, the Nationals scored the next three goals to take a 3-2 goal into the first break.

Josh Amidon scored the first goal on an assist from Walters before 2013 MLL MVP Kevin Crowley scored and then assisted on a Martin Cahill man-up goal with just under 20 seconds remaining in the opening frame.

Hunt opened the second quarter by driving to his left through the Nationals defense and putting a shot past Queener to put an end to the Hamilton run. But two quick goals by Kevin Cunningham and Cahill put the nationals back on top 5-3.

Once again, Hunt scored a lefty goal to draw the Bayhawks back within one. Another man-up goal, this time by Cunningham, put the Nationals back up by two, but goals by John Grant Jr. and Drew Westervelt evened the score at six heading into halftime.