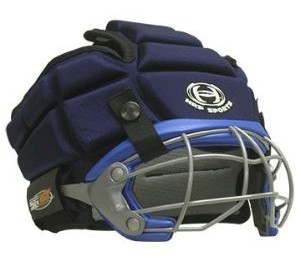 The SG360 model will be mandated in Princeton schools for women’s lacrosse and field hockey. (Photo courtesy of HRP Products, Inc.)

Princeton’s school board unanimously approved the new headgear rule following a strong recommendation from the district’s athletic director. Quinn said that as far as he knows, Princeton is the only district in the state to have such a policy. The district will pay for the SG360 headgear, which runs about $60 in retail.

A few years ago, New Jersey enacted a law mandating student athletes with a suspected concussion get medical clearance before being allowed to return to play.

Now, the Princeton school district has gone a step further, requiring headgear for all middle- and high-school soccer, field hockey and lacrosse players.

While parents and coaches hope that will reduce the risk for concussions, some sports experts aren’t convinced it will help.

Tim Quinn, president of Princeton’s school board, said nothing can totally prevent a concussion from happening, “but if we can minimize the effect of any sort of head injury, I think that’s a good thing. I think what we’re doing here is looking out for the best interests of our athletes.”