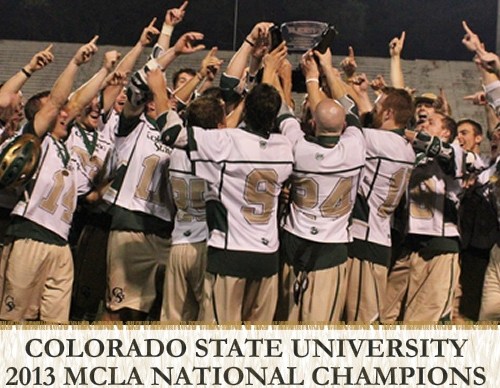 The Colorado State University men’s lacrosse team opens its season this weekend at the first annual Lax Coaches vs. Cancer event in Palm Desert, CA. The Rams, ranked #1 in the MCLA preseason poll, will face the #12 Grand Canyon Antelopes and #8 Oregon Ducks on Friday evening and Sunday morning respectively.
It’s the first ever match-up between CSU and Grand Canyon, a team in its second year competing in MCLA Division I after several seasons at the Division II level. Meanwhile, the Rams and the Ducks will renew acquaintances for the first time since the 2008 season.
As a first-time event, Lax Coaches vs. Cancer puts some of the top programs in the MCLA on display this weekend, including #2 Colorado, #4 BYU, #5 Chapman and #10 Boston College. 11 total games highlight the action from Thursday through Sunday afternoon and all proceeds from the event will benefit the American Cancer Society.
All games will take place at the Hovley Soccer Park, 74735 Hovley Lane East, Palm Desert, CA. Admission is free, although donations to the ACS are accepted and encouraged. CSU’s Sunday morning game will be streamed live online by The Lacrosse Network.
Both GCU and Oregon were MCLA national tournament participants in 2013 and both were bounced by BYU in the first and second rounds respectively. Grand Canyon has yet to play a game this year while Oregon heads into the weekend at 2-0 prior to their Friday tilt against BYU.