The San Diego State women’s lacrosse team continued its winning ways on Sunday afternoon, earning a road victory over Mountain Pacific Sports Federation (MPSF) foe Saint Mary’s, 20-9, at SMC Recreation Field.
The Aztecs (4-0, 2-0 MPSF) are off to the best start in program history, as five different players recorded hat tricks on Sunday. Senior Meris Walsh, junior Lauren Maack and sophomores Felice Artuso, Andrea Killebrew and Katie Gill scored three goals apiece, as SDSU improved to 4-0 all-time against the Gaels. Junior Bailey Ewing also added two goals, both of which came during SDSU’s 11-0 run to take control of the game after a slow start.
“We started off flat and Saint Mary’s took advantage of that because they’re a fast, aggressive team,” head coach Kylee White said. “We just rallied together and figured out what we needed to do. It’s been the story of the season so far – fighting through adversity.”
Junior Grace Korandovich recorded a goal, an assist, four draw controls and three caused turnovers in her second-consecutive strong performance, while junior Christina Ricciardulli finished with three caused turnovers, five draw controls and two groundballs, and freshman Vickie Porter had six draw controls. Freshman goalkeeper Katie Merritt made her first-career appearance, playing 36 minutes in the net and tallying six saves.
The Gaels raced out to a 3-0 lead and were ahead 5-2 before Walsh scored unassisted and Artuso capitalized on a free-position opportunity to pull within one. The Aztecs later went on a 3-0 scoring spurt to take the lead, as Maack’s goal off a pass from Gill made it 7-6 with 14:51 left in the first half.
After Saint Mary’s (0-3, 0-2 MPSF) tied it less than three minutes later, San Diego State scored the next 11 goals to take a commanding lead, 18-7. The Aztecs have started MPSF play 2-0 for the second-straight year, as everyone of the roster played on Sunday.
“It’s a great way to start conference play,” White said. “Having a complete team effort and having everyone contribute was awesome.”
San Diego State outshot Saint Mary’s 41-22 (28-10 in the first half), had a 19-11 edge in draw controls and an astounding 12-1 advantage in free-position shots. Senior Allie DeBruhl scored a game-high four goals for the Gaels, while freshman Megan Zummo had two assists, five caused turnovers and six draw controls.
SDSU plays host to No. 10/9 Boston College in its home opener on Saturday, March 8, beginning at 1 p.m. PT at Aztec Lacrosse Field.

No. 13 Stanford was unable to protect a five-goal lead and suffered its first loss of the women’s lacrosse season, losing to Vanderbilt in overtime, 16-15, in nonconference play Sunday at Laird Q. Cagan Stadium.
Stanford (2-1) got three goals apiece from Lucy Dikeou and freshman Kelsey Murray, and Hannah Farr extended her goal-scoring streak to 13 as the Cardinal built a 14-9 lead with 15:07 to go in the second half. However, Vanderbilt (3-2) scored five answered goals to close out regulation.
Stanford opened the six-minute mandatory first overtime period by scoring a free-position goal by Rachel Ozer with 25 seconds left in the first three-minute overtime half. After Alexandra Crerend won the draw to begin the final three minutes, Stanford seemed in position to win and worked a stall to run out the clock. However, a turnover on a misconnected pass with 1:01 left proved costly.
The turnover led to Abby Wheeler’s tying goal with 34 seconds left. Stanford fouled on the play, allowing Vanderbilt to keep possession on the restart. Only 19 seconds later, the Commodores took the lead on another Mallory Schonk to Wheeler combination – the two combined for both final-minute goals – this time for the winner with 15 seconds left.
Wheeler scored seven goals and Schonk had five assists for Vanderbilt.
To illustrate how important possession is, Stanford did not have the ball after the turnover, except as the final seconds ticked away.
“We need to show better control and confidence,” Stanford coach Amy Bokker said. “We need to have a killer instinct. It’s all in our charge. We need to finish it.”

Who’s Hot?
Penn (+9): The Quakers fell behind early to Denver, 5-1 at the end of the first quarter, but rallied for a 12-10 win over the previously fourth-ranked Pioneers. Penn has a ton of experienced players all over the field and should be a threat to win the Ivy League title this year. Penn’s only loss so far is by three goals to Duke.
Johns Hopkins (+6): The Blue Jays are off to a 4-0 start after downing previously fifth-ranked Princeton 15-9 on the road in New Jersey.
Notre Dame (+4): North Carolina led for three quarters on Saturday, but the Irish rallied for an 11-10 win in Chapel Hill. It was a nice bounce back from losing 8-7 at home to Penn State the week before.
Who’s Not?
Denver (-7): The Pioneers lost control against Penn in the second quarter and couldn’t halt the Quakers from coming back to win. Denver is now 3-2 with losses to Penn and Duke, and has a tough stretch ahead: vs. Notre Dame in California on Saturday, a game back home against Penn State next Monday and Ohio State the Saturday after that.
Princeton (-7): The loss to Johns Hopkins leaves the Tigers without a signature win so far this season. The most impressive was a 12-10 victory over Hofstra in the season-opener.
North Carolina (-4): Had they held on to win, North Carolina likely would have retained the third spot in the rankings. Ifs and buts, ifs and buts…
Who’s New?
Army (20): Army sneaks into the top 20 with 3-1 record, and the lone loss of the season to current No. 13-ranked team UMass. It should be noted that there isn’t much difference between teams ranked 16 and beyond to about 35, if you compare the season’s results. Nearly every team in that range has a loss that thus far keeps them just out of the top 20, such as Hofstra, which beat Fairfield and Georgetown this past week, but lost to Marquette earlier in the year.
Dropped Out?
Ohio St. (18): The Buckeyes sit at 1-3 with losses to UMass, Penn St. and Johns Hopkins, all top 20 teams. They will have a great chance to work back into the top 20 as the season progresses. 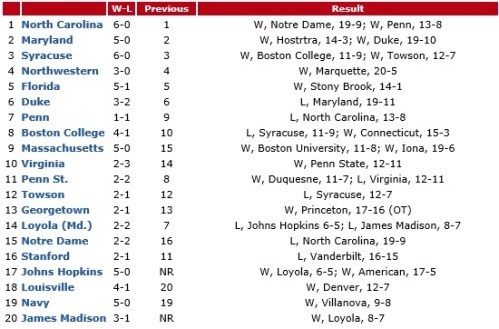 Who’s Hot?
Massachusetts (+6): Still unbeaten after beating Boston University and Iona this week, the only thing holding the Minutewmen back is the lack of a defining win over a top team. There’s a good chance they’ll be able to win out leading up to a March 25th date against Northwestern, and if that’t the case, that’ll be a big one.
Virginia (+4): Virginia continues to be a tough squad to slot, with a sub-.500 record but all three losses coming against ranked teams (and two against the Top 5). A close win over Penn State and losses by a lot of the middle of the pack float them back to the Top 10.
Louisville (+2): A road win over Denver Saturday lifts the Cardlinals a couple spots in their second week in the rankings. If they can go 2-0 against Ohio State and Notre Dame this week, they’ll see even more upward mobility.
Who’s Not?
Loyola (-7): Tough sledding this week for the Greyhounds, who fell by a goal each to Johns Hopkins and then James Madison in the past week. Things don’t get any easier with Penn State visiting on Wednesday.
Stanford (-5): An overtime loss to unranked Vanderbilt hurts the Cardinal, but redemption could be at hand if they can navigate a Fresno State-Towson-Georgetown slate this week with at least two wins.
Penn State (-3): A one-goal loss to Virginia is a tough read, but the Nittany Lions can make it right back into the Top 10 if they can get through James Madison and Loyola in the coming week.
Who’s New?
Johns Hopkins (No. 17): A 5-0 record and win over then-No. 7 Loyola put the Blue Jays in the ranks and jump them over a couple of other squads that don’t have the same quality of signature win yet.
James Madison (No. 20): Wins over Loyola paid off this week, as the Dukes make their first appearance of the season. Their only loss so far is to Florida, but Penn State and Connecticut lurk this week.
Dropped Out?
Stony Brook: The Seawolves were routed at home by No. 5 Florida, scoring just once. Their biggest game so far was a one-goal loss to Notre Dame, so their resume isn’t strong enough to warrant a ranking, but don’t be surprised to see them make it back.
Denver: Denver fell on the road to Louisville, but has a chance to right the ship if it can get a win against a Vanderbilt team that just topped MPSL rival Stanford this week.