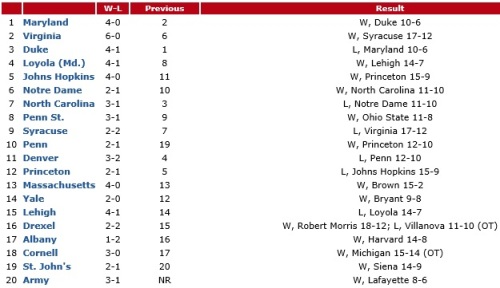 Who’s Hot?
Penn (+9): The Quakers fell behind early to Denver, 5-1 at the end of the first quarter, but rallied for a 12-10 win over the previously fourth-ranked Pioneers. Penn has a ton of experienced players all over the field and should be a threat to win the Ivy League title this year. Penn’s only loss so far is by three goals to Duke.
Johns Hopkins (+6): The Blue Jays are off to a 4-0 start after downing previously fifth-ranked Princeton 15-9 on the road in New Jersey.
Notre Dame (+4): North Carolina led for three quarters on Saturday, but the Irish rallied for an 11-10 win in Chapel Hill. It was a nice bounce back from losing 8-7 at home to Penn State the week before.
Who’s Not?
Denver (-7): The Pioneers lost control against Penn in the second quarter and couldn’t halt the Quakers from coming back to win. Denver is now 3-2 with losses to Penn and Duke, and has a tough stretch ahead: vs. Notre Dame in California on Saturday, a game back home against Penn State next Monday and Ohio State the Saturday after that.
Princeton (-7): The loss to Johns Hopkins leaves the Tigers without a signature win so far this season. The most impressive was a 12-10 victory over Hofstra in the season-opener.
North Carolina (-4): Had they held on to win, North Carolina likely would have retained the third spot in the rankings. Ifs and buts, ifs and buts…
Who’s New?
Army (20): Army sneaks into the top 20 with 3-1 record, and the lone loss of the season to current No. 13-ranked team UMass. It should be noted that there isn’t much difference between teams ranked 16 and beyond to about 35, if you compare the season’s results. Nearly every team in that range has a loss that thus far keeps them just out of the top 20, such as Hofstra, which beat Fairfield and Georgetown this past week, but lost to Marquette earlier in the year.
Dropped Out?
Ohio St. (18): The Buckeyes sit at 1-3 with losses to UMass, Penn St. and Johns Hopkins, all top 20 teams. They will have a great chance to work back into the top 20 as the season progresses.