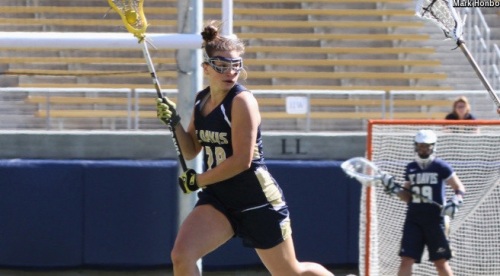 An unbeaten weekend on the opposite coast followed by a bye from competition prepares UC Davis women’s lacrosse for its first homestand of the 2014 season, and an unusually busy stretch of games to finish out the university’s winter quarter.
The Aggies play five games in a span of nine days, starting with Saturday’s home opener against Cal. They follow with contests against Siena on Monday night and Robert Morris on Wednesday, followed by a weekend road trip to USC and San Diego State on March 14 and 16.
UC Davis’ opening weekend, which featured a 9-8 victory over George Mason and a more convincing 12-6 win at Old Dominion, provided head coach Kate Henwood with areas of encouragement… and places for improvement. “I think it was a great first weekend for the 2014 season. Coming home 2-0 is exactly what our goal was,” said Henwood. “We wanted to make a statement to ourselves and set the tone for the level of expectations. We weren’t 100 percent satisfied with our play. We made a lot of mistakes, but we still won despite them. That’s the difference between a great team and a mediocre team. The team never doubted for a second that we would win.”
The brightest lights of that opening weekend were rewarded with a sweep of the MPSF weekly honors back on February 24. Freshman Melissa Kellan captured both Offensive Player and Rookie of the Week accolades, while junior goalkeeper Kai Murphy was chosen as Defensive Player of the Week. Kellan shot a combined 10-for-13 on the offensive end, while Murphy posted 31 saves with 12 goals against in the two contests.

The Oregon Ducks travel to Canada to take on the Simon Fraser Clansmen in a traditional PNCLL rivalry game.  SFU jumps out to a 3-0 lead before the Ducks tie the game at 3 all at the end of the first quarter.  SFU holds a 6-4 lead midway through the third quarter.  Then the Clansmen go on a five goal run and take a 15-5 win to claim first place in the PNCLL