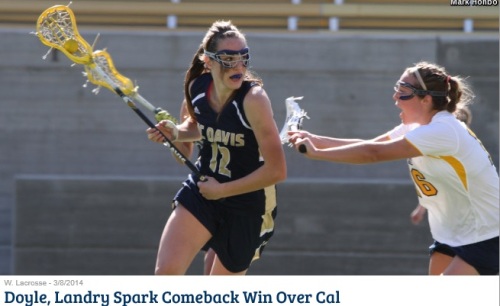 Sophomore Mary Doyle scored on an eight-meter with 17 seconds remaining in regulation while junior Elizabeth Landry tallied a game-high four goals to lift UC Davis to an 8-7 comeback victory over California in Mountain Pacific Sports Federation women’s lacrosse action at Aggie Stadium Saturday afternoon.
The Aggies, picking up their first win over the Golden Bears since 2010 and only their second in the past decade, remain unbeaten at 3-0.
Landry had three of her goals in UC Davis’ 5-0 comeback run in the second half. Doyle scored two, both after the break. Freshman Melissa Kellan and junior Troy Cragen each tallied one. Cragen’s goal, her first in almost exactly two years, equalized the game at 6-6 after what had been a 5-1 Cal lead in the first half. In all, UC Davis shot 6 of 8 on free positions.
Paige Gasparino netted two goals to lead six Golden Bear scorers. Lizz Lavie had two assists.
UC Davis surrendered four unanswered goals in the first half to spot its guest a 5-1 lead through the first 21 minutes. Landry cut the deficit to 5-2 with her eight-meter goal in the 30th minute. Neither team managed to alter the board until Lavie fed Gaby Christman for a goal in the 42nd, boosting the Cal lead to four.
The Aggies answered with a flurry of goals during a five-minute span. Landry and Doyle each connected on unassisted drives in the 46th minute, cutting the margin to 6-4. Landry struck again in the 49th with her eight-meter, than Cragen planted the game-tying goal in the 50th. Landry finally gave UC Davis its first lead with yet another free-position conversion with 7:26 remaining, but Burke won the ensuing draw and Gasparino promptly tied the game at 7-7.