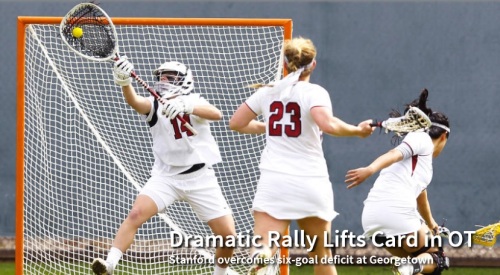 The No. 19 Stanford women’s lacrosse team rallied from a six-goal second-half deficit to beat No. 14 Georgetown, 11-10, in double overtime on Sunday to earn back-to-back road victories over ranked teams.
Lucy Dikeou scored the unassisted winner 2:14 into sudden death to complete a run of seven unanswered goals that began with 19:16 left in the second half with Stanford facing a 10-4 deficit.
The dramatics weren’t limited to Dikeou’s winner. Trailing 10-9 in the final seconds of regulation, Stanford emptied its net in a desperation attempt to tie the score. The opportunity came when Alexandra Crerend was fouled with one second left, just after picked up a ground ball in the eight-meter arc. Her free-position shot scored to make it, 10-10, and force overtime.
It was the second consecutive dramatic last-second free-position goal for Stanford, which beat No. 11 Towson, 8-7, on Friday after Hannah Farr scored as time ran out for the first-overtime half.
In the first overtime, Georgetown drew a free position, but Stanford goalie Lyndsey Munoz denied Natalie Miller’s shot and Farr picked up the loose ball and the first six-minute overtime, which is played to its entirety, ended scoreless.
In the second overtime, Georgetown won the draw, but Farr again came to the rescue, stripping a Hoya player in Stanford’s own defensive end and picking up the ground ball to launch an attack. Just a minute later, Dikeou scored her only goal of the game for the winner.
Stanford (5-1) swept its three-games in five-days road trip that began with a 19-5 Mountain Pacific Sports Federation opening victory at Fresno State. It also was Stanford’s third overtime contest in four games, having lost at home to unranked Vanderbilt, 16-15, on March 2. 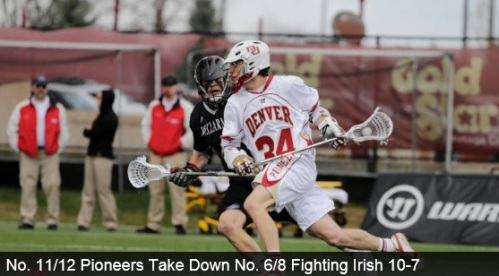 Led by a career-high six goals from junior Erik Adamson (Anaheim Hills, Calif.), the No. 11/12 University of Denver men’s lacrosse team defeated the No. 6/8 University of Notre Dame 10-7 on Saturday afternoon in front of 5,870 fans at LeBard Stadium at Orange Coast College in the Pacific Coast Shootout.
“I’m really proud of all of our young men,” said head coach Bill Tierney. “Beating a team like Notre Dame is a phenomenal achievement in-and-of-itself. Coming off the loss last weekend to Penn and a rough week of practice, I’m proud of how this team pulled together to gut out a win. I can’t say enough about Ryan and Jamie, and how they kind of kept us in the game, especially when Notre Dame had those runs in the second quarter. Erik had a great game in front of his home crowd to lead us with six goals.”
Adamson took eight shots on goal, scoring six goals, while also grabbing one ground ball. Freshman Zach Miller (Steamburg, N.Y.) finished with two goals and an assist for three points, while junior Wesley Berg (Coquitlam, B.C.) scored one goal and finished with two assists for three points. Berg also tallied a game-high three ground balls.
Sophomore transfer Jack Bobzien (Littleton, Colo.) finished with one goal and one assist for two points, junior Sean Cannizzaro (Cazenovia, N.Y.) finished with two assists and senior Jeremy Noble (Orangeville, Ontario) tallied one assist and a caused turnover.
Junior goalie Ryan LaPlante (Fort Collins, Colo.) made 10 saves and allowed four goals, while senior goalie Jamie Faus (Lakeville, Conn.) made seven saves and allowed only three goals.
John Scioscia scored three goals for the Fighting Irish, while four others added goals each. Goalie Shane Doss made eight saves on the day.
Notre Dame held the advantage in shots (46-29), ground balls (36-20) and face-off wins (15-of-21 to 6-of-21). Denver capitalized on its lone man-up opportunity, while the Fighting Irish scored on three of its five chances. Denver also held the advantage in saves, 17-to-8.
Denver jumped out to a 2-0 lead off goals by Adamson and Bobzien before Notre Dame’s Westy Hopkins scored with 5:21 left in the first. The Pioneers added another with eight seconds left in the quarter as Adamson scored his season of the game, 10th of the season to put DU up 3-1.