The Occidental women’s lacrosse team was balanced on offense and stingy on defense as it improved its best start in program history with an easy 18-4 win over Saint Joseph’s (Me.) at Jack Kemp Stadium on Tuesday.
The Tigers move to 6-0 overall and are 5-0 with one round of SCIAC play in the books.
Tori Larson led Oxy with three goals and Mackenzie Wright, Mary Richardson, Alessandra Quaroni, Rebecca Belding, Rebecca Reese, Alida Beck and Brita Loeb each had two. Abbey Williams also scored for the Tigers.
Belding dished out a game-high four assists.
But the more impressive performance was Oxy’s defense, particularly in transition. The Tigers held Saint Joseph’s (Me.) to 5 for 17 on clear attempts, often turning the Monks mistakes into offense at the other end.
Mary Morrissey, Kristin Feinberg, Emily Fowler and Monica Rosenkranz led the way, with goalies Kirsten Hee, Adrienne Ruth and Katherine Torrey picking up the slack behind them.
“Our last three opponents we held to single digits so that was definitely our goal today,” Oxy head coach Stephanie Janice said. “We knew they had some good dodgers so we were just looking for good 1v1 play. We were really getting into a rhythm on defense and six games into the season they’re really thinking one play ahead.”
Fowler forced four turnovers and snatched up three ground balls.

Junior Elizabeth Landry scored four goals while sophomore Ellie Delich added another three to lift UC Davis to an 11-9 overtime win over Siena in non-conference women’s lacrosse action at Aggie Stadium Monday evening. Both players scored in the extra frame to help the Aggies remain undefeated for the year.
UC Davis moves to 4-0 overall. The Saints slip to 1-4.
Landry scored one goal in the first half, two in the second, then her fourth on the opening possession of the overtime period. She also picked up a game-high six draw controls. Delich netted back-to-back midway through the first half then added an insurance goal in the 63rd minute. Freshman Melissa Kellan provided another two goals while Meghan Jordan and Morgan Sissler each netted one. Senior Carly Voris had an assist, three draw controls and five ground balls.
For Siena, sophomore Sarah Croutier shot 4-for-5 while Alyssa Treanor hit another two. Junior midfielder Julia Sirianni had a goal with a team-leading four draw controls.
The game ran in streaks for either team before settling into a 9-9 tie at the end of regulation. Croutier and Treanor sparked the Saints to a 2-0 lead in the first nine minutes before Delich’s consecutive scores led a 3-0 Aggie comeback. Croutier responded with two goals amidst a run of four unanswered Siena goals to set the board at 6-3 through the 28th minute. However, Kellan’s eight-meter goal in the 29th and Jordan’s unassisted drive with five seconds left in the first period evened the tally at 6-6 at the break.
The ebb-and-flow pattern continued into the second as Landry’s two goals extended UC Davis’ scoring stretch to five unanswered, giving the Aggies an 8-6 lead through the 39th minute. Croutier’s four goal halved the deficit to one at the 10:30 mark in the second, then turnovers by either side halted the scoring before Kellan’s second-chance goal made it 9-7 in the 49th minute. UC Davis suffered a tough break minutes later when a goal came off the board in the 51st: Delich had found Voris cutting through the eight-meter area, and Voris converted the pass, but the shot was disqualified after a routine stick check. The lead remained at two, and Siena gained possession.
The Saints closed the gap to a 9-8 when Treanor converted an eight-meter chance in the 55th, then Sirianni equalized when she converted an Erin Mossop assist with less than four minutes remaining. UC Davis had three chances to take the game in regulation. Junior Sara Quero drew a charge when Croutier attempted a crease roll — a play on which she had scored twice before — with 2:40 remaining. The Aggies quickly transitioned to the offensive end, but Siena freshman goalie Samantha DePasquale came up with a big save on an ensuing eight-meter attempt. 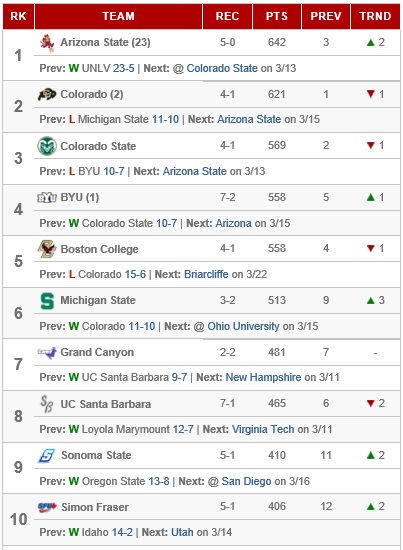 Paced by a five-point performance from junior Erik Adamson (Anaheim Hills, Calif.), the No. 9 University of Denver men’s lacrosse team stunned the No. 5 Penn State Nitany Lions 15-11 on Monday night at Peter Barton Lacrosse Stadium in front of 1,816 fans. The win bumps the Pioneers to 5-2 on the season, while Penn State falls to 3-2.
“I have to give these guys a lot of credit the way they pulled out this win tonight,” said head coach Bill Tierney. “They pulled out two really tough wins against top-10 teams in just two days. This Penn State team is a really good lacrosse team and I’m so proud of our guys with the resolve that they showed. It’s not easy to play a weekend like this, especially against two teams of this caliber, so I have to not only thank our players but our entire coaching staff for being able to not only get everyone physically ready, but also mentally prepared.”
Adamson finished with his third hat trick of the season, sixth of his career, as he netted four goals and tallied one assist for five points. The Big East Offensive Player of the Week followed up his six-goal performance against Notre Dame on Saturday by targeting five-of-his-eight shots on net, while also grabbing one ground ball and causing one turnover.
Freshman Tyler Pace (Mission, B.C.) netted his first collegiate hat trick as he placed six-of-his-nine shots on cage. Junior Wesley Berg (Coquitlam, B.C.) and sophomore transfer Jack Bobzien (Littleton, Colo.) both finished with three points off two goals and an assist a piece.
Junior Sean Cannizzaro (Cazenovia, N.Y.) and freshman Zach Miller (Steamburg, N.Y.) both finished with two points each of a goal and an assist, while senior Jeremy Noble (Orangeville, Ontario) and junior Mike Riis (Carlsbad, Calif.) both finished with a goal each. Riis’ goal was the first of his career and the first by a Pioneer long-pole this season. Noble also finished with a game-high seven ground balls and a game-high three caused turnovers.