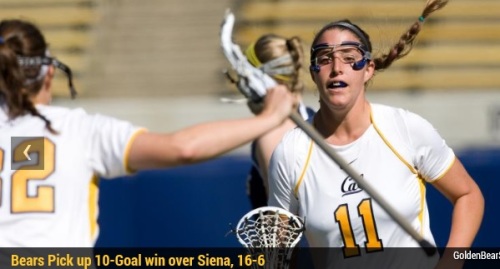 California responded in a big way after suffering two tough defeats in its last two games with a convincing 16-6 victory over Siena on Wednesday afternoon from Kabam Field at Memorial Stadium. Golden Bear veterans led the way to get the team back in the win column with five goals coming from junior Gaby Christman, four from senior Amelia Burke and three from senior Paige Gasparino.
Christman recorded nine shots, Burke was 3-for-4 with free-position attempts and Gasparino also chipped in an assist, two ground balls, a draw and a caused turnover.
Cal (2-2, 1-2, MPSF) set the tone early and shut out the Saints through the first half.
“We knew this game was a critical turning point of our season,” head coach Ginger Miles said. “We wanted to set the tone early and maintain the momentum throughout the game. We needed to clean up the mental mistakes that we had made in the two previous games. We did a great job today in all facets of the game.”
Just two minutes into the game, Christman notched her first goal of the day to give the Bears the early 1-0 advantage. That goal kick started the scoring barrage as the Bears went into the locker room with a 12-0 halftime lead.
“Gaby came out on fire,” Miles said. “She really wanted to set a tone. Often times she is the spark on offense and defense, and she has made her mark causing turnovers and utilizing her speed on offense too.”
The huge first-half lead gave Miles and her coaching staff a chance to get more players off the bench and into the game for some valuable playing time.