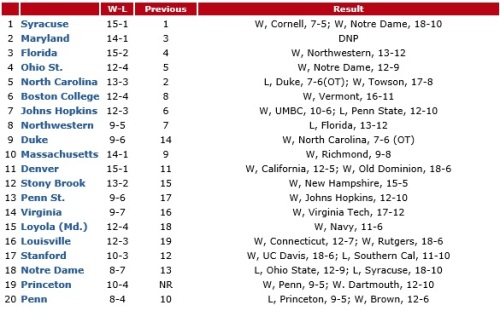 Who’s Hot?
Duke (+5): You can never count out a rivalry game, but Duke wasn’t expected to beat a suddenly reeling North Carolina team during the week. Whether they got way up just for their Triangle rivals will be determined in the ACC quarterfinals this week, when the Blue Devils take on Virginia.
Penn State (+4): The season has been a bit of a see-saw for the Nittany Lions, but it’s telling that their last loss to a team outside of the current Top 10 was back on March 5th to James Madison.
Loyola (+3): A four-game slide in late February/early March seems to be long gone, as the Greyhounds swept through their first Patriot League season unbeaten and are hosting the conference tournament this weekend before a date on the final Saturday of the year against former Big East rival Syracuse.
Louisville (+3): Unbeaten in Big East play, the Cardinals have won eight straight since losing back-to-back games against Ohio State and Notre Dame. If they can get the job done in their regular-season finale against Marquette, they’ll be the top seed in the Big East tourney, but have a tough potential final opponent in Georgetown, which stands at No. 2 in the league and is hosting the tournament the first weekend in May.
Who’s Not?
Penn (-10): A steep drop for the Quakers this week, as a loss to Princeton means the Tigers will be league regular season champion for the Ivies this year. More importantly, Penn has zero wins over any team currently in the Top 20.
Notre Dame (-5): Two losses to top competition this week hurt, but the Irish suffer more because they’re running cold at the worst time of the season – having fallen in four of their last five and are just 4-5 since back-to-back wins over Northwestern and Louisville in early March and 8-7 overall. The road doesn’t get any easier this week, as Notre Dame drew No. 1 Syracuse for its ACC tournament quarterfinal opponent due to its 1-5 record in the brutal league regular season.
Stanford (-5): A surprise upset at the hands of Lindsay Munday’s USC Trojans, coupled with wins over Notre Dame and Georgtown not holding up as well as they once looked, knocks the Cardinal down a few spots,
North Carolina (-3): It was just a week ago that the Tar Heels relinquished the No. 1 spot for the first time all season, but all that matters right now is that coach Levy’s team is 2-3 in its last five. We still wouldn’t bet against them when all is said and done, given that they have shown that they can beat anyone when the things go right. They’re just on a rough stretch and have to play a road game against ACC tournament host Boston College in the quarterfinals.
Who’s New?
Princeton (19): After a 1-3 start, the Tigers have roared back with nine wins in their last ten, with the only loss coming against No. 2 Maryland by a goal. Clinching the regular season Ivy League title for the first time since 2006 this weekend, Princeton is getting hot at the right time.