Seton Hall Prep tied the game with 12 seconds remaining in regulation thanks to a goal from Pino Bio, but Spencer Evans ended the game 1:22 into overtime to lift St. Ignatius (Calif.) over Seton Hall Prep, 6-5, in the Konica Minolta Big City Classic on Saturday at MetLife Stadium in East Rutherford.

In a game in which his team played one of the premiere lacrosse programs on the West Coast, Seton Hall Prep coach Dave Giarrusso was proud of the way his kids fought against a school he knew all too well.

Seton Hall Prep jumped to a 2-0 lead in the first quarter thanks to goals from Ryan Giordano and Dan Ferguson. But St. Ignatius countered with two goals from Matt Emery and one from Joe Lang and led 3-2 at halftime.

Jayson Bevacqua scored in the third quarter for Seton Hall Prep to tie the game at 3-3. St. Ignatius received goals from David Fleming and Chad Bell to go up 5-3 in the fourth quarter, and Seton Hall’s Brendan Barrett scored on an extra man opportunity to cut it to 5-4 with 1:52 remaining.

Ryan Leigh won the ensuing draw and Seton Hall Prep kept possession. With 12 seconds remaining, Bio let a shot fly from 15 yards out and found the back of the net to send the game into overtime. To start overtime, Peter Marchetto won his team’s 12th of 14 draws and Seton Hall Prep had the ball on offense. But St. Ignatius goalie Cyrus Scott intercepted a pass and St. Ignatius went on offense. Evans sank the goal 20 seconds later to lift St. Ignatius.

St. Ignatius coach Chris Packard, who was an assistant at St. Ignatius along with Giarrusso, was thankful to his friend for the opportunity to come cross-country.

“Dave has been referred to as ‘The Godfather of Lacrosse’ in California and that is exactly how I feel about him,” Packard said. “I could not be prouder of him for what he’s done in order for us to advance as a program with the seeds he planted 20 years ago in California. It’s tough to have to compete with someone like that because he is such a good man. I think his players emulate what we thought they would and they play as hard as they can for him.”

No. 1 Notre Dame (10-2, 4-1) will face No. 7 Syracuse (10-3, 4-1) Saturday in the Konica Minolta Big City Classic. Faceoff is slated for 6:30 p.m. (ET) at MetLife Stadium in East Rutherford, N.J.
• The Fighting Irish will bring a four-game win streak into Saturday’s showdown with the Orange. Notre Dame and Syracuse are tied with Villanova for first place in the BIG EAST standings. All three teams have clinched a spot in next week’s BIG EAST Championship.
• The Notre Dame-Syracuse tilt will be the second game of Saturday’s doubleheader at the Big City Classic. No. 4 Cornell will face No. 12 Princeton at 4 p.m. 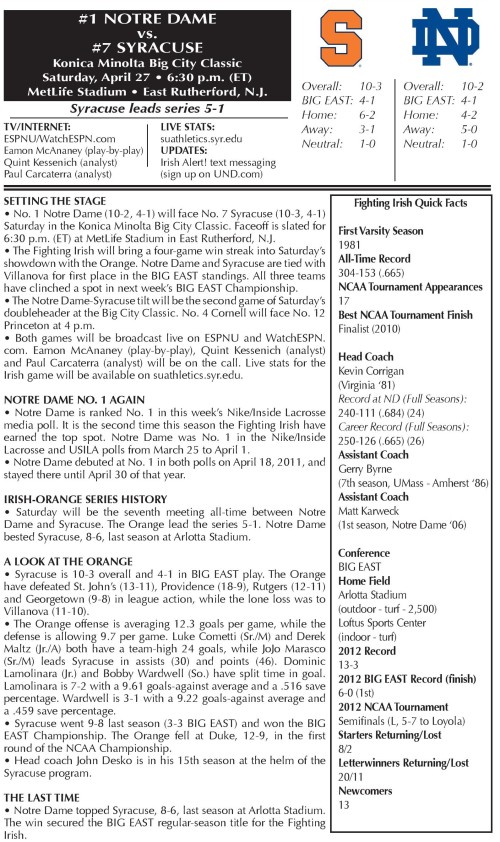 “The Wildcats play at No. 2-ranked Chaminade of Mineola,  N.Y., on Thursday before taking on Seton Hall Prep of West Orange, N.J., on  Saturday at MetLife Stadium — home of the NFL’s New York Jets and New York  Giants — in the Big City Classic. Are the Wildcats excited? You better believe  it.”

By most accounts, St. Ignatius has the best boys’ lacrosse  program west of the Mississippi. But are the Wildcats — ranked 11th in the country by Toplaxrecruits.com — among the top handful of teams in the  nation? They’re about to find out soon — real soon. For the first time in its  storied history, St.

Ignatius (16-0) will travel to the hotbed of U.S. lacrosse  to test itself against the premier competition in the country.

“I can’t tell you how pumped up the boys are,” St. Ignatius  coach Chris Packard said. “They are over the moon for this trip because it shows  how amazing and far we’ve come as a program. We couldn’t have picked a better  opponent [than Chaminade]. Our guys deserve to play the best, and whether we win  or lose, it’s going to be a great experience.”

SI will be in an unfamiliar position on Thursday against a  team that has sent multiple players to the professional ranks. Even though the  Wildcats boast eight Division I commitments, they’ll be the underdogs against  Chaminade, which boasts a whopping 21 — count ’em, 21 — future Division I  players.

“We always go into a game fully expecting to win,” the  junior attacker said.

Lang acknowledged the fact that the team’s trip to the East  Coast carries huge ramifications in that a solid showing will gain immeasurable  respect for SI, while a poor result or two would further dampen the credibility  of high school lacrosse on the West Coast.

“We’re going in with nothing to lose,” Lang said. “We’re  supposed to lose to the No. 2 team in the country, but we’re hoping to leave a  footprint and represent the West Coast and show there’s some great lacrosse  being played out here.”

Lang was one of 11 SI players who scored a goal in a 17-5  win over Sacred Heart Cathedral (3-11) on Monday at Crocker Amazon Field. SI’s  John Corbolotti and SHC’s Sedge Gates shared match-high honors with four goals  each.