Hamilton’s Kevin Crowley was the star of the show, earning Most Valuable Player honors after a three-goal, two-assist performance.

Although the game was played in rain for much of the contest, the numerous fans in Charlotte, over six thousand, created a great atmosphere for an entertaining game.

Supernova, captained by MLL Ultimate Fan Fantasy winner Frank Ranfone,  dominated the decisive fourth quarter, outscoring Eclipse, captained by UFF winner Cameron MacKenzie, 9-2 in the final frame. Denver’s Zack Greer scored the first goal of the quarter for Eclipse to make it 15-14 in favor of Supernova, but Supernova dominated the rest of the quarter scoring the next nine goals to stretch the lead to an insurmountable 24-14 score. Crowley and Boston’s Kevin Buchanan lead the fourth quarter charge with two goals each.

Sieverts finally put an end to the Supernova run with his second goal of the night, to bring the game to a 24-15 final.

Other than the final quarter, it was a tight, highly competitive contest that featured great play from both sides.

Supernova got off to a quick start, scoring the first two goals of the game with Crowley tallying the game’s first goal less than a minute into the game. Ohio’s Steele Stanwick followed that goal with a tally of his own to push the score to 2-0.

New York’s Rookie attackman Rob Pannell got Eclipse on the board when he received a feed from his Lizards teammate Greg Gurenlian and ripped a right-handed shot past Denver’s Jesse Schwartzman. 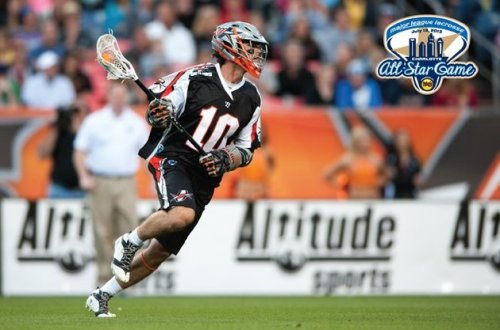 In only his second year out of the University of Virginia, Denver Outlaws attackman Chris Bocklet has made his presence known throughout Major League Lacrosse. Chris has emerged as the perfect complement to perennial All-Star attackman Brendan Mundorf and the host of other offensively minded All-Stars on the Denver Squad. The attackman was strong from his 2012 MLL debut, scoring ten goals in his first three games, finishing off his rookie campaign with 17 goals and three assists in seven games.
Bocklet has added to the success of last season, improving all areas of his game; he now leads the league in goals with 33 and is second only to Paul Rabil with 42 points, an incredible feat for a second year player. Chris attributes his rise in production to his routine this offseason and the pressure he put on himself to get even better, “I kinda put a lot of pressure on myself, because I really wanted to play for the Outlaws. I enjoyed it and got a taste of it last year, playing in some games at the end of the season, and how fun it is, so I took the offseason as a time to get ready and prepare myself so that when the season came around I was confident in my stick and confident that I would play and be a starter for the Outlaws.”
When asked about what the selection meant to him, the second year attackman said, “First of all it’s an amazing honor to be selected. There are so many great players on every single team in this league, so it’s just an amazing honor to be selected as an All-Star. I just want to represent the Outlaws in the game, and I’m excited for it. It should be fun. I grew up watching it; it’s always been entertaining and I’m always looking forward to it every year, so I’m definitely excited to be a part of it now.”
Bocklet’s successes on the offensive end are a large reason his Outlaws have been of fire. Denver leads the league in goals for with 17.2 a game, an impressive 4.2 more than Boston, the next highest team. Not only are they scoring, they are scoring efficiently, leading the league in shooting percentage, converting on .358 of their shots—once again, good for the league lead. The incredible offense, lead by a plethora of All-Stars, coupled with stellar defensive play, anchored by the brick wall they call Jesse Schwartzman, has led to an impressive team record—the ’13 Outlaws now hold the best record to start a season, 10-0, surpassing the ’05 Baltimore Bayhawks for the best ever.

Paul Rabil, who graduated from the prestigious Johns Hopkins university in 2008, was one of the most highly regarded prospects in draft history. Rabil’s incredible athleticism combined with his uncanny ability to shoot on the run made him the number one overall pick in the 2008 MLL Collegiate Draft.
Boston immediately knew that they had drafted a star. Rabil’s performance in his rookie campaign earned him a spot on his first All-Star roster, a trend that has continued throughout his career. With his selection to the 2013 All-Star game, Rabil will make an appearance on his sixth ASG roster, a Cannons’ franchise record for a single player.
Throughout his career, Rabil has been able to put up some very impressive numbers. The perennial All-Star has a combined 281 career points in 65 appearances for Boston.
In 2013 Rabil has been living up to his expectations as one of the best shooting midfielders in the MLL. Rabil’s shooting percentage is currently .236, his highest since 2010 when he finished the season scoring on 26 percent of his shots. The former collegiate All-American has carried the Cannons’ offensive load for much of the first half of the season, Rabil is currently tied with Drew Snider for fourth in the league in scoring behind Chriis Bocklet, Kevin Crowley and Brendan Mundorf.
Rabil’s offensive numbers are the highest when he distributes the ball well, something that he hasn’t had going in the first half of the season. Rabil’s teammate, fellow All-Star Mike Stone, has contributed to the Cannons’ scoring attack and has helped right the ship after a rocky start to begin the year.
Rabil is the consummate professional on the field and is now widely considered to be the best player in the league. With three points this weekend against Charlotte, the Cannons’ All-Star will pass Conor Gill to become Boston’s all time leading scorer.