The lacrosse community wasn’t surprised that Belichick took a chance on an athlete who spent more time in college playing lacrosse rather than football. Belichick played lacrosse at Annapolis High, Phillips Academy, and Wesleyan University. 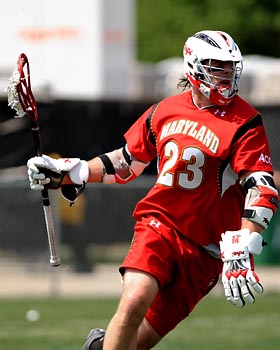 “(Yeatman)… transferred to Maryland in January 2009. After playing two seasons of lacrosse, he joined the Terps’ football program at tight end for the 2010 season.

For the Patriots, one might come from the lacrosse field – which might as well be out of the blue.

But just because Will Yeatman’s path to the Patriots differed from that of most NFL players doesn’t mean it can’t work. Especially in New England, where coach Bill Belichick knows a little something about jumping from lacrosse to football. He did it himself.

If Yeatman survives the final roster cuts in early September, a player with an extremely limited college football background will be competing for arguably the most successful team in the most popular sport in the United States.

“He’s a good athlete,’’ Belichick said. “He’s made a lot of progress, but he’s got a lot of ground to make up just from a football-playing experience standpoint. But he’s working hard to do that.’’

The lacrosse community wasn’t surprised that Belichick took a chance on an athlete who spent more time in college playing lacrosse rather than football. Belichick played lacrosse at Annapolis High, Phillips Academy, and Wesleyan University. At Wesleyan, Belichick also played center and tight end for the football team. Both Belichick’s daughter Amanda (Wesleyan) and son Stephen (Rutgers) played lacrosse in college, too. Amanda is currently an assistant coach for the Ohio State women’s lacrosse program.

Yeatman’s unconventional path to the NFL began at a traditional college football powerhouse. He enrolled at Notre Dame in the fall of 2006, where he played tight end for the football team and attack for the lacrosse team.

After missing the 2008 spring lacrosse season because of an arrest for driving while intoxicated, Yeatman was suspended for the final 10 games of the ’08 football season following an additional arrest for underage drinking.

“You could tell that he still had the itch to play football,’’ former Maryland lacrosse coach Dave Cottle said. “I just thought it was the right thing for him. I told him I thought he had a gift . . . and he would always regret it if he didn’t go out and try to play football.

At Maryland last fall, Yeatman recorded 13 catches for 134 yards and one touchdown in 11 games. His former lacrosse teammates cheered him on from the stands.

As reporters worked on stories in the press box at Gillette Stadium following the Patriots’ 31-28 victory over the Colts, an unexpected occurrence unfolded on the playing field.

Belichick, in a sweatshirt and jeans, was playing catch with Paul Rabil, a former lacrosse star at Johns Hopkins. At one point, Belichick climbed into the stands to retreive an errant ball. At another point, Belichick was receiving passes of almost 100 yards.

All in a day’s work.

Bill Belichick played lacrosse and football at Wesleyan. In this 1974 Wesleyan team photo, he is third from the left in the first complete row of players, wearing No. 44.

Rabil, who plays for the Boston Cannons of Major League Lacrosse in addition to playing for the Stealth in the NLL, tweeted this earlier tonight: “Coach B is dialed in. Keeps his stick in the office. His ‘stress reliever’ is my game.”

Belichick, a five-time Super Bowl winner and head coach of the Patriots since 2000, lettered in lacrosse while attending college at Wesleyan University in Middletown, Conn. As a senior, he was named captain of his lacrosse team. He was inducted into the Wesleyan University Athletics Hall of Fame as part of its inaugural class in 2008, according to his bio on the Patriots website.

“Coach [Kevin] Corrigan did a great job at Notre Dame,” said Belichick, whose son Stephen is a junior defenseman for the Scarlet Knights. “When I saw my son’s team, Rutgers, beat them out there, they sure didn’t seem like a national championship contender at that point. But they just got better with each game, and they really played great down the stretch, and that’s when it counted. They got some great goaltending and big plays out of their midfield. So it was a terrific game, and it was a big win for Duke after they had been so close. So it was great for lacrosse.”

New England Patriots Coach Bill Belichick, who spoke while preparing for Sunday’s showdown between the Ravens and the Patriots, is very tight with Johns Hopkins coach Dave Pietramala. So it’s no surprise that Belichick is eagerly anticipating the upcoming season.

“It looks like there’s a lot of good teams in lacrosse this year,” he said. “So I’m sure it’ll be very competitive. There will be all the usual big names, but it seems like there’s always a couple teams that get into the mix. Hofstra had a great year last year and Villanova and teams like that that people weren’t talking about a lot at the beginning of the year but showed up at the end. It’s always interesting.”

Belichick admired Notre Dame’s run to the national title game, especially after he watched the Fighting Irish’s 10-8 home loss to Rutgers on March 27. That setback began a three-game skid for Notre Dame and nearly jeopardized the team’s hopes for a berth in the NCAA Tournament.

But they recovered in grand fashion, upending higher-seeded opponents in Princeton, Maryland and Cornell before falling to Duke in the championship final.

"The difference between lacrosse and football is that at the end of each play, we get to go back in the huddle and get re-organized. In lacrosse, the game never stops," said Belichick.

(From Baltimore Sun article) The New England Patriots are spending this week preparing for a visit from the Ravens Sunday, but that didn’t stop Patriots coach Bill Belichick from talking a little lacrosse during a conference call with media members who cover the Ravens on Wednesday.

Belichick, who grew up in Annapolis and graduated from Annapolis High School, spent at least five minutes of his 15-minute conference call discussing lacrosse.

Regarding his relationship with Johns Hopkins and coach Dave Pietramala, Belichick said, “It’s a strong one. Coach Pietramala has been a good friend. Certainly enjoy talking to him and exchanging ideas about coaching and preparation and things like that and stats and players. I know the sports are different and all, but coaching is still coaching to a large degree and handling your team, there’s a lot of carryover even though the sports are different. He’s given me the opportunity to be around his teams, on the practice field, at games, and in meetings and in preparation. I’ve learned a lot and I’ve taken a lot of things that he’s done and incorporated them into some of the things that we do – more in terms of coaching and preparation style and that type of thing. He’s come up to visit us here a few times in training camp and at games, and I have a great exchange of ideas with him, and he’s been a huge help. I have a tremendous amount of respect for what he’s done and what he’s done with that great program, which I’ve always admired – even though I grew up at the Naval Academy and bleed blue and gold. But being that close to Hopkins and the program that they run there from when he was a player until now as a coach, I just have tremendous respect for him and the entire Johns Hopkins lacrosse program. It’s first class and they do things the right way. It’s been a great opportunity for me to watch them up close and see how they do some of the things they do so well.”

Lacrosse runs in the Belichick family. Bill played the sport at Wesleyan and his son Stephen plays at Rutgers. Belichick took a moment to compare lacrosse and football.

“The difference between lacrosse and football is that at the end of each play, we get to go back in the huddle and get re-organized. In lacrosse, the game never stops,” said Belichick, who also named current and former Blue Jays Paul Rabil, Stephen Peyser, Michael Evans and Michael Kimmel. “There’s always a flow and there’s no real time to set up a play for the most part. The game is a free-flowing game, so the decisions and the parameters you set up for your players to deal with a game like that are very interesting and in some ways, they’re a lot more complex than a game like football. Football’s a lot more complex from the standpoint that you have more time in between plays to put in new formations and new personnel and new plays and things like that. It’s different, but there’s a lot of good learning and application going both ways.”

The conference call ended on a lacrosse question: Can Syracuse win its third consecutive national championship?