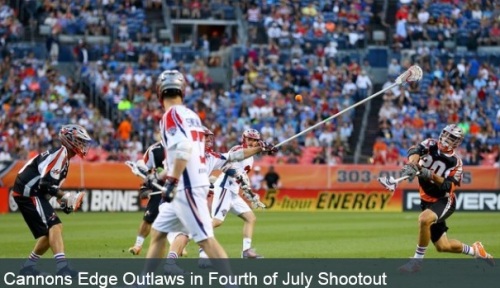 The fireworks started long before the final whistle at Sports Authority Field as the Boston Cannons (5-5) edged out the Denver Outlaws (7-3), 17-13, in an offensive explosion.
Denver cut Boston’s lead to one late in the third quarter, but five fourth-quarter goals by the Cannons help them escape with the win.
The two teams traded off goals for the majority of the game. Zack Greer got the Outlaws on the board first with the first goal of his season less than a minute into the contest, and just minutes later Boston’s Rob Emery evened the score. Emery finished with four goals on the night.
Denver scored the next goal when Eric Law found twine for the 50th goal of his career. Then the Cannons scored twice, and the Outlaws followed suite, responding with back-to-back goals of their own. Law scored on an acrobatic put in that was originally ruled no goal before being overturned following a challenge, and John Grant Jr. sniped in a behind-the-back goal.
Boston took their turn next, as Will Manny scored two goals to close the quarter with the Cannons up, 5-4.
Jeremy Sieverts got into the action in the second frame, scoring two quick goals to put Denver up, 6-5. His first goal moved him into fifth place in Outlaws’ history for all-time points with 112.
The Cannons didn’t let up though and finished the quarter on a 3-0 run, sending them to the locker room with an 8-6 advantage.
Sieverts started the third quarter like he did the second, finding twine early to get a hat trick. The two teams then traded off goals for the remainder of the quarter. Greer and Law scored just two minutes apart at the end of the frame to give them both a hat trick on the night, and tie the game at 11-11. For Law, it’s his eighth hat trick of the season. But after a late Boston goal, the teams headed to the final quarter with the Cannons up, 12-11.
Law scored his fourth goal of the game in the fourth quarter and Terry Kimener put one in late, but five goals from Boston in the final frame helped them seal the deal, 17-13.
It’s the first time in 762 days that the Outlaws have lost at home. The last time Denver lost back-to-back games was in June of 2012 when it dropped contests on May 19 and June 12.
The Outlaws return to action at home against the Florida Launch on Sunday, July 20, at 1:00 p.m. MDT.

They’ve missed the playoffs just three times in the league’s 13-year history. They won the MLL title just two years ago. And yet, they found themselves on the outside looking in this year. Looking at the middle stretch of the season, this looked like a surefire playoff team, but a difficult start and finish led to the Cannons downfall. If Boston comes out of the gate firing next season, there’s no reason why the Cannons can’t blast their way to the top of the standings in 2014.

The 2-Time MLL MVP finished 3rd in the MLL in scoring with 32 Goals 19 Assists and 3 2pt Goals in 2013. The Boston Cannons Captain was also named an MLL All-Star for the 6th time in his 6 year career and passed the 50 Point mark for the 4th time.

Paul Rabil, who graduated from the prestigious Johns Hopkins university in 2008, was one of the most highly regarded prospects in draft history. Rabil’s incredible athleticism combined with his uncanny ability to shoot on the run made him the number one overall pick in the 2008 MLL Collegiate Draft.
Boston immediately knew that they had drafted a star. Rabil’s performance in his rookie campaign earned him a spot on his first All-Star roster, a trend that has continued throughout his career. With his selection to the 2013 All-Star game, Rabil will make an appearance on his sixth ASG roster, a Cannons’ franchise record for a single player.
Throughout his career, Rabil has been able to put up some very impressive numbers. The perennial All-Star has a combined 281 career points in 65 appearances for Boston.
In 2013 Rabil has been living up to his expectations as one of the best shooting midfielders in the MLL. Rabil’s shooting percentage is currently .236, his highest since 2010 when he finished the season scoring on 26 percent of his shots. The former collegiate All-American has carried the Cannons’ offensive load for much of the first half of the season, Rabil is currently tied with Drew Snider for fourth in the league in scoring behind Chriis Bocklet, Kevin Crowley and Brendan Mundorf.
Rabil’s offensive numbers are the highest when he distributes the ball well, something that he hasn’t had going in the first half of the season. Rabil’s teammate, fellow All-Star Mike Stone, has contributed to the Cannons’ scoring attack and has helped right the ship after a rocky start to begin the year.
Rabil is the consummate professional on the field and is now widely considered to be the best player in the league. With three points this weekend against Charlotte, the Cannons’ All-Star will pass Conor Gill to become Boston’s all time leading scorer. 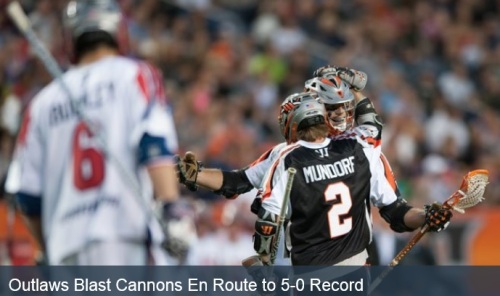 The Denver Outlaws had never defeated the Boston Cannons in the Mile High City.
Until Friday night.
The team reversed that trend with authority on Friday night, handing the Cannons a 24-14 defeat with the help of six multiple-goal performances and four two-point goals to tie the second-highest scoring output in franchise history.
Since the team’s inception in 2006, the Outlaws dropped the first five games that they played against the Cannons at home. But Friday’s victory sent the team to 5-0 with its franchise-record 11th conseuctive regular-season win. Boston dropped to 1-4 with the loss.
“[Beating the Cannons at home] is exciting,” Zack Greer said. “[It’s] obviously nice to check that one off. If you don’t win, then you hear about it again.”
The four two-point goals accounted for one-third of the Outlaws’ 24 points and matched a club record for a single game. Jeremy Sieverts scored two, and Justin Turri and Drew Snider contributed one apiece.
“When you can hit those shots, it really changes the game,” Snider said. “It’s not only a momentum swing, but it also puts you up by two. If you’re in a deficit, those twos can really help you out.”
Despite winning fewer than 50 percent of the faceoffs for the first time all season, the Outlaws didn’t face a deficit after trailing 1-0 early in the contest. They compensated for their limited success at the faceoff X with a balanced scoring effort and unselfish play. Snider led the way with five goals, and Greer, Sieverts and Brendan Mundorf each added a hat trick.
“The ball seemed to find me in good spots on the field, and luckily I was able to put them away,” Snider said.
The Cannons’ Brent Adams kicked off the scoring 1:39 into the contest, but the Outlaws responded with a 6-0 run and never trailed again.
Boston clawed its way back into the game, closing out the first quarter with four consecutive goals—including two from Matt Poskay—to narrow the Outlaws’ advantage to one.

Denver got off to a quick start thanks to eventual player of the game Drew Snider, who scored his first of five goals 13 seconds after the opening face-off.  A goal by Terry Kimenr and another tally from Snider brought the score to 3-0 before the Cannons answered back with 2 of their own from Paul Rabil and Mike Stone. Zach Greer, in his first game with the Outlaws, scored on a power player and Justin Pennington followed up to bring the score to 5-2 after the first quarter.
The second quarter opened similarly to the first, with Snider and Terry Kimener scoring the first two goals. Former Outlaw Colin Briggs scored the next goal, off an assist from Boston captain Ryan Boyle, which earned him 400 career points, breaking the Major League Lacrosse Record previously held by Casey Powell. The Outlaws and Cannons traded several goals to close out the first half, including another goal by Greer and a goal after a face-off by Anthony Kelly. The Outlaws went into halftime leading 9-6.
The Cannons came out firing in the second half and eventually tied the score at 9-9. Greer quickly answered back with a goal for at hat trick. Greer got the next point of the game as well, with a slick behind the back goal to put the Outlaws up by 2. The Cannons ended the third quarter with a goal of their own to bring the score to 11-10.