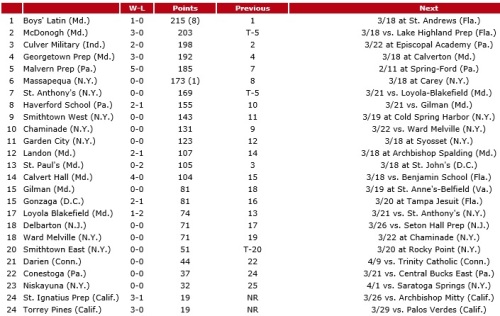 A pair of teams from the west region make their debuts this week in the Nike/US Lacrosse Top 25 poll, as California’s Torrey Pines and St. Ignatius Prep came in knotted for the 24th spot in this week’s rankings, while at the other end, Boys’ Latin (Md.) continued its reign at the top with eight of nine first-place votes.
McDonogh (Md.) jumps from fifth a week ago to No. 2 after a 3-0 start, with Indiana’s Culver Academy (2-0) slipping to third by a few votes. Georgetown Prep (Md.) stays at No. 3 with a 3-0 mark so far, while Malvern Prep (Pa.) moves up two spots to round out the Top 5.

The Loyola lacrosse team barely made the Maryland Interscholastic Athletic Association A Conference playoffs, able to sneak in on the season’s final day and then following up with an improbable run to Friday’s championship game against undefeated and No. 1 Boys’ Latin.

But the No. 4 Dons saved their best and most astonishing feat for the title game.

Overcoming a six-goal deficit early and then down two goals late in the fourth quarter, the Dons scored the game’s last three goals — with senior attackman Devin McNamara providing the game-winner with 1:56 remaining — to come away with a stunning 10-9 upset win over the No. 1 Lakers in front of an announced 6,271 at Towson University’s Johnny Unitas Stadium.

For Boys’ Latin, like it or not, it might be time to bring out the “U” word after the Lakers topped Calvert Hall, 13-7, in front of a big crowd Friday night at Paul Angelo Russo Stadium in Towson.

Coach Bob Shriver, who guided the last Maryland Interscholastic Athletic  Association A Conference unbeaten team in 2006, has his team on the verge of  another epic campaign after the Lakers (15-0, 6-0 league) throttled the  defending champion Cardinals (7-5, 3-3).

Boys’ Latin has three regular season games left and, considering it will most  likely be the top seed in the upcoming playoffs, could have only two more  contests in the postseason.

The Lakers then went on a 5-0 run three goals by Colin Heacock and two by his  fellow senior attackman Shack Stanwick for a 6-2 lead that was shaved to 6-3 on  junior attackman Andrew Fanshaw’s goal with 28 second left in the first half for  the Cardinals.

For the Boys’ Latin lacrosse team, which endured countless frustrating one-goal losses in an up-and-down season, Friday’s Maryland Interscholastic Athletic Association A Conference quarterfinal game at McDonogh was the first step at some redemption.

This time, the No. 6 Lakers did all the positive things necessary in the closing minutes to pull out an 8-7 upset win over the No. 2 Eagles to advance to the league semifinals. Boys’ Latin improves to 11-7 and will meet Gilman — which secured first place in the league’s Red Division with an 11-5 mark — in Tuesday’s semifinal at Towson University’s Johnny Unitas Stadium.

From the June issue of Inside Lacrosse, a feature segment on a typical week with MIAA powerhouse Boys’ Latin.

Down, 15-13, with 2 minutes, 49 seconds left in regulation, the Crusaders took what coach Rick Brocato called “an ill-advised shot,” adding that the Lakers regained possession, “went down and scored.”

Christian Walsh’s ninth goal tied the game at 15-15 with 51 seconds left off of an assist from Patrick Foster, setting the stage for Stanwick.

“We needed somebody to step up. And luckiy, I did,” said Walsh, who scored, unassisted, to bring the Lakers within, 15-14.

“This was a really tough week for us,” said Walsh, who is headed for Deerfield Prep in Massachusetts, with an eye toward attending Notre Dame. “And after losing to Calvert Hall on Tuesday, we really needed to bounce back against St. Paul’s.”

In overtime, the game-ending sequence featured Walsh, who was out to the left of Crusaders’ keeper, Harry Krieger, ripping a pass to Foster, who was behind the Crusaders’ goal.

Foster promptly dropped the ball, which rolled behind him toward the endline, but he quickly, and calmly, turned, retrieved it, and returned to offensive mode.

Foster spotted the oncoming Stanwick with a razor-sharp pass, which the latter zipped as a quick-stick goal into the upper net’s upper corner to Krieger’s left.

Foster and Stanwick then disappeared amid a mob of their celebrating Lakers’ teammates.

“This means everything,” said Walsh. “I want to make it to the playoffs and win the championship.”