In the battle for supremacy among the region’s high school boys lacrosse teams, the only true measuring stick is San Diego Section championships. For the time being, Torrey Pines is king of the mountain.

The top-seeded Falcons, playing at home, beat No. 2 La Costa Canyon 7-5 on Saturday to win the section’s first Open Division championship, their sixth section title in the 12 years lacrosse has been a sanctioned sport. LCC, which upended Torrey Pines in last year’s Division I final, has five.

“It feels great. It really stung to lose in the championship last year,” Falcons coach Jono Zissi said. “We had a good game plan tonight. We limited their transition, and we were pretty precise with our offense.”

Torrey Pines (17-3) led by a goal at halftime and opened a 7-3 lead by the end of the third quarter.

Since lacrosse became a sanctioned sport in 2002, only four teams have been crowned San Diego Section Division I or Division II champion — Poway, Torrey Pines, La Costa Canyon and Coronado. That changes this season with the strongest programs competing in the new Open Division.

La Costa Canyon has appeared in the championship match in seven of the last eight years while hoisting the trophy five times. However, the Mavericks’ quest for a sixth crown just got a little tougher. Defending Division II champion Coronado, Bishop’s and Cathedral Catholic have been added to the mix.

The Torrey Pines falcons led by Cornell bound Sean Doyle and Maryland bound Lucas Gradinger look for redemption against the La Costa Canyon Maveriks. The Maveriks under the leadership of head coach Jesse Foss have taken down the Falcons twice this season with the last meeting ending in triple overtime.

The fourth-seeded Torrey Pines Falcons beat No. 3 Poway 10-7 in the CIF San Diego Section Division I championship game at Westview High on Saturday, three days after they knocked off No. 1 seed and defending-champion La Costa Canyon in the semifinals.

The title is Torrey Pines’ fourth overall and first since 2007. It comes a year after the Falcons (18-5) lost to La Costa Canyon in the title tilt.

“It feels great,” Torrey Pines junior Sean Doyle said. “It’s unreal. I can’t believe we actually won. We had a ton of confidence coming in after the win over LCC, but we had to keep rolling, and we did it.

“Redemption, baby — it feels so nice.”

Falcons coach John Zissi said his team came together at the right time.

“With high school kids, there were certainly some ups and downs,” Zissi said. “I think we finished the last two weeks really strong. This last week was our peak week. That was our best game of the year against LCC on Wednesday and we played well tonight.”

Poway (14-4) was playing in its third final and first since 2006. The Titans’ lone championship came in 2002, when they beat the Falcons in the championship.

“The ultimate goal is to win the last game of the season,” Poway coach Paul Sanit said. “That’s always what we want to do. We didn’t get there, but we have 10 seniors who really worked hard this year to carry the team and got us to the championship game. You have to be proud of them. We accomplished a lot.” 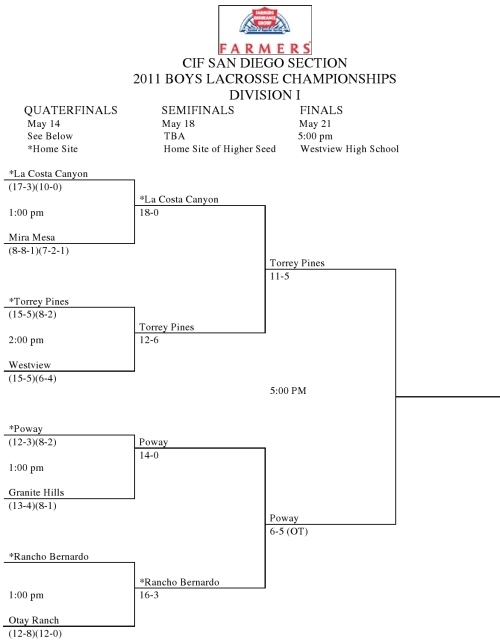 As their contribution to the successful Girls/Boys Lacrosse doubleheader last Friday night, the Islander Girls Lax Team dominated Poway. The Islanders scored the first seven goals of the game, led 7-1 at the half before cruising to a 13-4 final score. Westsidelax.com promptly installed Coronado as the No. 3 team in the state. “It’s still super early in the season, so I don’t pay too much attention to the rankings,” said Islander Head Coach Jessica Battle.

Kaitlyn Couture, who will take her lacrosse talents to Los Angeles next year and compete for USC, led Coronado with five goals, followed closely by Michaela Guerrera with three goals and two assists. Caroline Carlson scored two goals and added an assist, with Mollie Privett providing the same offensive output and Nikki Kruger scored one goal. Meganne Weissenfels had seven saves in the game to earn the victory.

“It was really a team effort,” said Battle of the victory. “Couture and Guerrera did really well. A freshman who has stepped up is Sarah Andersen, who is a great defender. Cory De Marco and Brianne Clifford played well defensively. Molly Privett had a good game and really everybody played well. Lauren Maack, who is an attack, played a great defensive game and came up with a bunch of interceptions. Everyone played a part in that.”

Tuesday the Islanders hit the road to play at Torrey Pines. “We’re just kind of gearing up,” said Battle of the current season. “We have a big game with Torrey Pines. That’s our CIF Final until further notice. We have to do everything we can to win. We’re excited and I think we are ready. If we play the way we have been playing, we’ll be fine. Scripps Ranch and Torrey Pines will be our toughest competition.”

Poway is coming off a 15-2 year in which it advanced to the playoff semifinals before running into eventual champion La Costa Canyon. While the Titans lost some key players from that squad, they return 12 seniors and should be a force to be reckoned with again. Senior goalie Derek Scozzafava will be a big key to Poway’s success, as will senior midfielders Chris Verne, Brady Tengberg and Matt Landon. Senior attacker Connor Sanit should be the Titans’ top scorning threat.

Westview is hoping to have a better season after a sub-.500 campaign last spring. Senior attack Mo Amitin could be the Wolverines’ most productive scorer. He will be complemented up front by classmate Jarrod Perry and sophomore Chris Summers. Senior C.J. Cantrabone is the team’s top middie, and the defense will be anchored by senior Greg Kurth and junior Andrew Beachele.

Canyon Crest Academy will be among the smallest teams in the league this year, but the Ravens still expect to be in the middle of the pack. Senior attackman Kaivon Sobhani should be the team’s leading scorer, and Cameron Lippitt will also be a threat at attack. Alex Siegel is a force as a long-stick middie, while senior Eric Ackley will lead a solid defense in front of junior goalie Eric Bertell.

Like Canyon Crest, Del Norte will field a varsity team for the first time this spring. The Nighthawks won’t have a senior class until nest year, so they may not be competitive right away. Del Norte will look for contributions from sophomore goalie Ty Tuey, sophomore attack Andrew Dickinson and junior midfielder Chris Laskero.