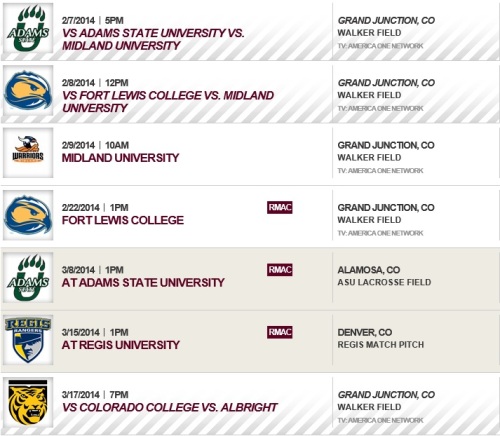 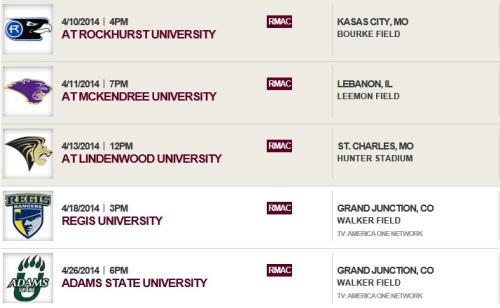 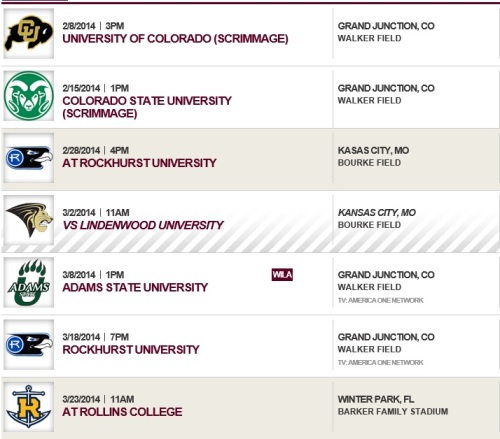 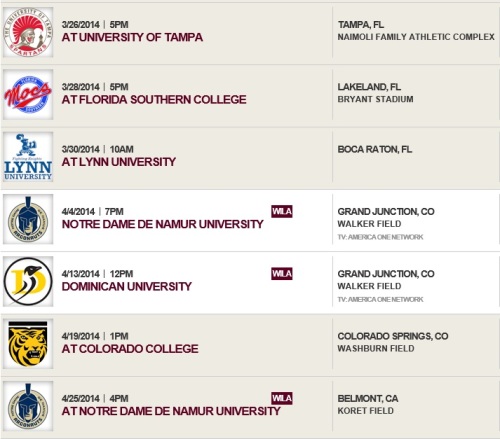 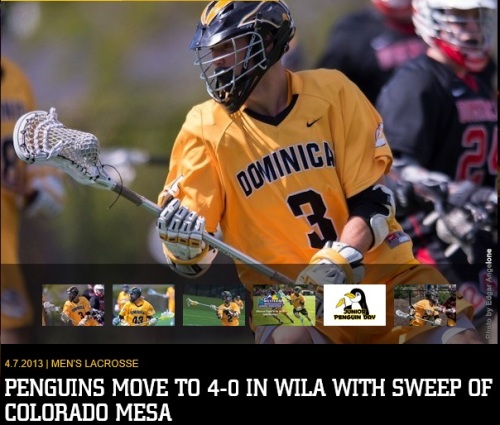 Novato High School product Dalton Copeland capped a thrilling come-from-behind win for the Dominican University of California lacrosse team on Sunday, scoring a sudden-death goal at the 2:34 mark of the second overtime period as the red-hot Penguins rallied from a 3-0 halftime deficit to an 8-7 victory at Colorado Mesa University.
The win, the fourth in a row by Dominican, pushed the first-place Penguins (6-4/4-0) into a two-game lead in the Western Intercollegiate Lacrosse Association standings with two games remaining. They beat Colorado Mesa (5-4/3-2), defending WILA champions, for the second time this season and avenged a bitter 5-4 loss to the Mavericks in Grand Junction exactly one year ago, a defeat that denied Dominican of winning the tiebreaker.
However, the Penguins needed a remarkable rally and a game-tying goal by freshman Cody Bernstein with 1:17 remaining in regulation to force overtime.
“We beat a very good team on their home field. It’s not easy,” said Head Coach Ned Webster. “I’m just proud of the guys being down at halftime and believing that the ball was going to find the net. We just believed we didn’t need to do anything special. We just needed to play [well].”
Copeland, senior Cam Evangelho, and freshmen Grant Clifford and Cody Bernstein tallied two goals apiece. Clifford set up Copeland for the game-winner in overtime after teammates Jake Fritz and Jake Craycraft took aim at the net but thought better.
“To be mentally tough, sometimes you have to pass up a good shot for a great shot,” Webster said. “We swung it to Dalton and he’s a big strong guy and he had a head of steam going down the alley and he stuck it.”
Copeland’s game-winner was made possible by Cody Bernstein’s dramatic game-tying tally after Colorado Mesa had come back from a 6-4 deficit to grab a 7-6 lead with three minutes to go. Older brother, Jake, assisted on Cody’s goal.

The Colorado Mesa University men’s lacrosse team continued their trek through the Western Intercollegiate Lacrosse Association (WILA) on Friday night with a match against Notre Dame de Namur at Walker Field. After a tightly contested first period, the Mavericks trounced the visiting Argos 14-4.
The game was delayed for over an hour because of lightning in the area. When the lightning subsided, it was all CMU.
The Mavericks outscored the Argos 10-1 after the first period and won 14 of the 22 faceoffs in the game.
Colorado Mesa had a trio of players record hat tricks in the game. Austin Pridham had three goals and added an assist while reigning WILA Offensive Player of the Week Michael Beimford and Stephen Brandenburg also had three goals.
Pridham also tied goalie Brad Brandenburg for the game-high in groundballs with five.
Brandenburg, the WILA Defensive Player of the Week last week, recorded 12 saves in the win.
Colorado Mesa will have a showdown with WILA leader Dominican on Sunday at 12:00pm at Walker Field.

Freshman Cody Bernstein had three goals and three assists, freshman Jake Craycraft scored the go-ahead and game-clinching goals and goalkeeper Sean Donohue made 16 saves, including two clutch stops in the third period, as the Dominican University of California men’s lacrosse team rallied from a two-goal second-half deficit to defeat defending Western Intercollegiate Lacrosse Association champion Colorado Mesa 11-8 on Saturday at Kennelly Field.
The victory allowed the Penguins (3-4/2-0) to move into first place and avenge a bitter 5-4 loss to the Mavericks (3-3/1-1) last April 7 in Grand Junction, Colo., a defeat that denied Dominican of winning the WILA title. It also raised the Penguins’ spirits 11 days after a challenging four-game road trip to North Carolina and Pennsylvania that featured matches against No. 1 Mercyhurst and No. 10 Pfeiffer.
“It was important to lift the morale of our team. I don’t think it had anything to do with us versus them,” said Head Coach Ned Webster. “Yes, we were approaching this game like it was a big game because it was, but the game was about us and our own execution.”
Sophomore Jake Fritz had two goals and an assist for Dominican while teammate Cam Evangelho also netted a pair of goals, the last one a man-up goal with 6:13 remaining in the third period that tied the game at 6-6. Dalton Copeland and freshman Grant Clifford also scored for the Penguins.
The comeback started after Colorado Mesa scored first in the second half against Donohue to take a 6-4 lead, yet Donohue prevented the Mavericks from extending their lead to three goals with back-to-back saves, the last with 8:55 remaining in the third period. Mesa scored only two more goals in the game from that point.
“As Coach Webster says again and again, it’s about forgetting about the last play and looking forward to the next one,” Donohue said. “It took our defense to play together in the second half to get it done. The defense played well together and the offense put it together.”
Dominican, after losing a 2-0 lead in the first period, finally regained the advantage when Fritz scored then, 1:15 later, Evangelho, who is tied with Fritz and Cody Bernstein for the team lead in goals with 12, netted the equalizer with the Penguins’ first man-up goal in the game after four opportunities. Cody Bernstein then scored with an assist from Craycraft, a play Webster designed during a time-out. It put Dominican in front 7-6.

The Colorado Mesa University Men’s Lacrosse team opened up Western Intercollegiate Lacrosse Association (WILA) play on Thursday night with a match against the Notre Dame de Namur Argos in Belmont, Calif. Colorado Mesa prevailed with an 8-4 win over NDNU and improved to 3-2 on the season and 1-0 in the WILA while the Argos fell to 2-4, 0-1 in WILA matches.
The Mavericks trailed 3-2 heading into halftime but came out in the third quarter and scored five goals while shutting out their opponents.
The two teams split the faceoffs with each team winning eight but the Mavericks had a decisive edge in groundball pickups 30-23 and saves 14-8.
Austin Pridham recorded his second consecutive hat trick with all three of his goals coming in the third period. His first goal proved to be the game-winner. Kade Robinson added two goals for the offense.
Brad Brandenburg picked up the win in goal making 14 saves between the pipes and teammate Josh Russell led the team in groundballs with four.
The Mavericks will have a showdown with WILA rival Dominican on Saturday at 3:00pm from San Rafael, Calif.