The BTB Players Manual is a series of 10 online videos that focus on passing, catching, ground balls, dodging, shooting, offense, and

defense, as well as strength, speed, and conditioning training. The BTB Players Manual also consists of a complete workout calendar with daily workouts, a systematic training guide and tips, and a college recruiting seminar.

Lacrosse Coaches Matt Rienzo and Jesse Miller have joined forces with some of the top professional lacrosse players in the country (Danny Glading, Mike Kimmel, Barney Ehrmann, and Kyle Dixon) to produce the most comprehensive lacrosse skill development and training program ever created.

Four year professional lacrosse player with the Chesapeake Bayhawks and 3-time All-American at UVA, Danny Glading, had this to say about the BTB Players Manual, “If you want to improve at lacrosse and become an elite player, then you need to use the BTB Players Manual.  It’s the only lacrosse development program of its kind, and it will teach you, step by step, how to take your game to the next level. This one of a kind program teaches you how to practice the most important parts of the game, in the right order, and the right way.  Coach Rienzo and Coach Miller are awesome coaches, and if you follow their program from start to finish, you will take your game to the next level.”

Coaches Matt Rienzo and Jesse Miller have over 25 years of combined coaching experience at Georgetown University, the University of Notre Dame, Tufts University, and Gonzaga College High School, and they have coached over 40 collegiate All-Americans.

Rienzo, who coached in six NCAA Quarterfinals and one Final Four, said this about the BTB Players Manual, “This program is perfect if you are a lacrosse player looking to get an edge on your competition.

It is great for coaches looking for new drills and techniques. It is also ideal for parents who want to learn more about the game to be able to teach their sons.

You learn the exact same techniques and drills that all the college and pro players do every day, and if you follow the program we guarantee that you will improve quickly and see results immediately.”

The BTB Players manual is available on your smart phone, tablet, or computer, and you can watch all the videos and workouts on the field during your workouts.

For more information about the BTB Players Manual visit: www.BTBPlayersManual.com.

University of Michigan men’s lacrosse assistant coach Ken Broschart is U-M’s defensive guru. The former defenseman at New York Institute of Technology coordinated the defense for Michigan’s club team in 2011 and maintains that role in the program’s first year at the varsity level. 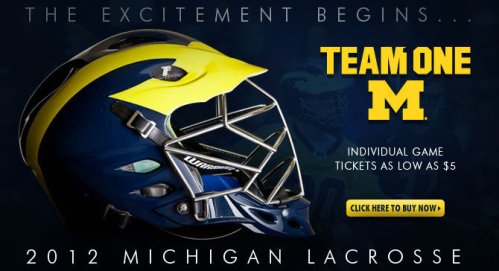 Junior defenseman and captain J.D. Johnson, as well as senior Rob Healy, will be expected to anchor the defense. Senior Austin Swaney is transitioning to long-stick midfield and junior captain Sean Sutton will play at defensive midfield to form the core of U-M’s defense.

MGoBlue.com: How different will this defense look as compared to the one you ran in 2011?

Ken Broschart: I would say it is a complete 180. We are much more of a slow-down team, maybe a little more of a conservative team and way more technical in terms of what we have to do. There is no room for mistakes at this level, where as a club team we were able to play a little looser and it’s okay to make mistakes because we did other things so well. It was okay because it got us in the type of game we wanted. In the type of game we have to play now, mistakes must be limited.

MGB: So what are the fundamentals that this defense will focus upon?

KB: We are a little more team defense oriented, so we are more about our sliding packages and our help defense on the back side. As opposed to a team that would be very good one on one. I think with the athletes we have now it’s going to be very tough to keep up one on one, so we have to be very good and very skilled on team defense. A lot of our principles go into that — getting in off-ball really quick, staying a little bit tighter than usual just, so our slides are shorter, and being able to be on hands early. Lots of communication, if we can get better at communication we can make strides on that.

MGB: What are some things that the defense has improved upon since the fall?

KB: I think we are doing a lot of things better. One thing that we are doing better is getting our sticks up in the lane. We are getting our beginning slide package going pretty well, so our base defense is starting to look pretty good.

MGB: Who are the players you can rely upon on defense to start the season?

KB: On defense, we will be led by J.D. Johnson and Rob Healy. Those two will probably be our bookends on D. Then we have a couple of guys who are younger, like Dakota Sherman and a couple others that are younger. We’re going to move Austin Swaney to long-stick middie, so he’s going to be our starting long stick. He’ll be very strong. I would say our one D-midfielder is Sean Sutton. He’s a benchmark guy. Those four guys are going to be the nucleus of our D.

We have some guys who are starting to rise up and take control, especially at D-midfield right now, like Tommy Orr, a freshman who came out of nowhere. He was actually an offensive midfielder that got moved to D-midfield. He’s playing great and aggressive. A guy like Fernando Murias; he’s doing a nice job. He needs to get a little more physical. He’s starting to become a better leader.

Mack Gembis is a guy we didn’t expect much from coming in. He’s very fundamental, but he’s still got a lot to learn. He’s probably going to play a big role, just because of our lack of depth on defense. Our defense right now is one of the weaker parts of our team if not the weakest, so we have to do a lot of work.

MGB: How many players would you like to cycle in and out of the lineup?

In the first installment of Notre Dame Lacrosse University of the 2011 – 2012 season, Assistant Coach Gerry Byrne outlines the “Umbrella” drill.

“…Maryland had few answers for the Cavaliers’ zone defense…”

Necessitated by a season-ending shoulder injury to junior defenseman Matt Lovejoy in the teams’ first meeting on April 2, Virginia employed a zone for the final eight contests — a stretch during which the Cavaliers went 6-2, including a five-game winning streak to end the season. 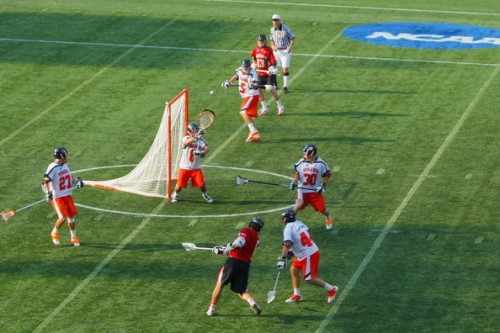 The Terps tried to attack the zone by putting two players on the crease in front of senior goalkeeper Adam Ghitelman (a game-high nine saves) and forcing the action inside. But several passes went astray, and senior attackman Ryan Young, junior midfielder Drew Snider and senior long-stick midfielder Brian Farrell each hit either the posts or crossbar.

“I think we got a lot of looks early,” said senior attackman Grant Catalino, who paced Maryland with two goals and one assist. “Adam made a bunch of good saves, we hit a few pipes, missed a few shots. But I think we prepared pretty hard and we executed our game plan. It just seemed that the ball didn’t roll our way today.”

Coach John Tillman said trying to pass to the interior part of any opponent’a defense entails rewards and risks.

“You’ve got to give your guys some rope and let them make some plays. But you also want to be choosy and you want to be responsible,” he said. “You know you’re not going to be 100 percent, but you certainly hope you make a lot more good plays than bad plays. … Again, they’re so rangy and athletic, it may seem like there’s an opening, and then they take it away pretty quickly.”

There’s really some subtlety to playing great defense in lacrosse, especially on the women’s side of the sport. It’s more about anticipation, foot speed, reflexes, instinct and cutting off angles than sheer physicality … although the latter isn’t totally eliminated. That’s where the subtlety comes in.

For Northwestern freshman Kerri Harrington, her basketball background is also handy on the lacrosse field. That was especially the case Sunday in Stony Brook, N.Y., as the expected favorites, No. 1 seed Maryland and No. 2 Northwestern, met for the national championship. Defense prevailed in a mild upset, as the Wildcats won 8-7.

“I had experience with face-guarding; I did it in high school,” Harrington, one of Northwestern’s defensive standouts Sunday, said of both her prep lacrosse and hoops careers.

The Terps, who were seeking their 11th NCAA title, had lost just once previously this year — a double-overtime defeat at Dartmouth to end the regular season. That had ended a 28-match winning streak for Maryland, which included last year’s championship-game victory over Northwestern.

Maryland’s long-standing Aussie connection has continued with attacker Sarah Mollison, who comes from a lacrosse-playing family in Melbourne. She was targeted by Northwestern as the lynchpin to Maryland’s attack, and Harrington was assigned the task of doing everything she could to thwart Mollison.

It was a freshman versus a senior, but Harrington figured one advantage she had was that she is used to trying to defend dynamic-scoring teammate Shannon Smith in practice. Another plus was that Harrington is 5-foot-10 but very nimble, and she uses the combination of height and speed to frustrate attackers.

“I figured I had a lot of preparation going against Shannon,” Harrington said. “So my teammates kept saying, ‘You got this. You can do this. Just look [Mollison] in the eye and don’t let her get the ball.’ If she did get it, I knew how to play one-on-one defense.”

It was Harrington’s first start this season, but she’s got quite a pedigree. Her older sister, Sara, played for the Wildcats. The Harrington sisters are among several alums of Westwood High in Massachusetts who are playing now, or previously did, for Northwestern.

Once the game began, the coaching chess match was on. And it had a kinship to last November’s field hockey national championship. That showdown between perennial powers Maryland and North Carolina pitted two coaches who’ve been going against each other for decades. The Terps and Missy Meharg prevailed over the Tar Heels and Karen Shelton, 3-2 in double overtime, for the field hockey title.

Cornell may be young, but it has big-stage experience and Virginia experience, junior attackman Rob Pannell said.

At one juncture of Wednesday’s lacrosse win over Canisius, Cornell’s defense settled into a six-on-six set with a lineup that typically would cost a head coach sleep.

Five sophomores. One freshman. Add sophomore goalie A.J. Fiore, and the Big Red was about as young as it’s been at that end in recent memory. But it was no fluke.

When 14th-ranked Cornell (3-1) plays No. 2 Virginia (5-1) on Saturday in the second game of Inside Lacrosse’s Face-Off Classic tripleheader at M&T Bank Stadium, coach Ben DeLuca may play that exact lineup for significant minutes. Senior close defenseman Max Feely, an honorable All-American in 2010, isn’t expected to play after suffering an injury during practice last week.

“I’m comfortable with it,” said DeLuca. “That’s why those guys are playing. They’ve earned it in practice.”