COVER STORY – Worth the Wait They’ve toiled for years in pursuit of the opportunity that lay before them now – to represent their country on home soil. With the FIL World Championship just three months away, LM profiles three U.S. Team hopefuls on destiny’s doorstep- Lee Zink, Kevin Leveille and Chris Eck. FEATURES Casey’s Homecoming After four deployments as a U.S. Army Ranger, 29-year-old defenseman Casey Carroll feels lucky to be a Duke Blue Devil again. by Corey McLaughlin | Online Extra – “Tuesday’s With Corey” column on Carroll from earlier this spring. “I’m Kind of Unique” An injury at birth left Liberty’s Natalie Emery with limited use of her right arm, an obstacle the powerhouse lefty and Tennessee native now considers a gift. By Laurel Pfahler First Stick in Key West Not everyone in the Florida Keys is on vacation. Devoid of lacrosse in the southernmost point of the continental U.S., a few transplants used the US Lacrosse First Stick Program to get the sport off the ground. By Paul Ohanion COLUMNS From the Editor: Sports and Geopolitics His Space: Legend and Spirit Honored Her Space: For the Love of Lacrosse Boyle Point: The Trouble With Labels DEPARTMENTS High School Rundown Gaze on the early-season stars from the South and marquee games that could cause tectonic shifts in the Nike/US Lacrosse National Top 25 polls. The Scoop The Army-Navy rivalry comes to women’s lacrosse, the MLL and LXM Pro Tour play nice and former Princeton star Sean Hartofilis breaks into the movie business. World Lacrosse 2014 Navy’s Old Goats will be out in full force for the World Festivals in Denver. Your Edge Former Florida star and current Team USA midfielder Brittany Dashiell gives her tips for play between the lines. Give and Go Team USA assistant and Penn State University head coach Jeff Tambroni is on the hot seat this month. What did the former Hobart midfielder have to say to our questions?

Attackman Chris Bocklet, attackman Brendan Mundorf, goalie Jesse Schwartzman, midfielder Jeremy Sieverts and defenseman Lee Zink were named to the 2013 All-MLL Team, the league announced on Friday.
The five Outlaws on the All-MLL Team represented the most from any one team in a single season in league history.
Bocklet earned his first All-MLL honor after leading the league with 42 goals and tied for the MLL lead with 55 points this season. He posted the highest goal and point improvement of all MLL players between from the 2012 season with a 25-goal and 35-point improvement over his 2012 totals in those categories.
Mundorf earned his fourth career All-MLL honor (2009, ’11-13) and third in a row after scoring 23 goals with 18 assists for 18 games despite playing an injury-plagued 11 games. His 18 assists led the team and ranked sixth in the league.
Schwartzman was named to his second All-MLL squad (2009, ‘13) after earning the league’s Goalie of the Year Award in 2013. He set a new single-season record with a 9.67 goals-against average and also led the league in save percentage (.597 pct.), two-point goals allowed (3) and wins (14).
Sieverts made his first All-MLL team after ranking eighth in the league with 44 points, tying for 10th with 27 goals and tying for second with six two-pointers in 2013. He netted five hat tricks and shot a career-best .318 pct.
Zink earned his fourth All-MLL selection (2009, ’11-13) and third in a row after being named the league’s Defenseman of the Year Award for the second-straight season… He captained a defense that allowed a league low 139 points and just three two-point goals on his way to his seventh-straight MLL All-Star selection.
As the league’s top playoff seed, the Outlaws will play in the MLL semifinals against the Charlotte Hounds at 1 p.m. EDT on Saturday, Aug. 24 at PPL Park in Philadelphia. That game will be broadcast live on ESPN2. 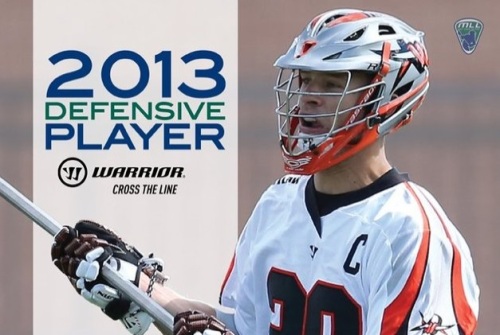 Major League Lacrosse, the premier professional outdoor lacrosse league, has named Lee Zink of the Denver Outlaws, the 2013 Warrior Defensive Player of the Year, as voted by MLL coaches and general managers.
“It’s such an honor to be named Defensive Player of the Year,” said Zink. “This has been a really special season with a great team. I think everything has really come together to lead to the success we’ve had on the field so far. I’m really excited for this weekend to try to win a championship.”
Zink earned all 16 possible first place votes, the only player to win an end of the year award by a unanimous decision this season. Brodie Merrill of the Hamilton Nationals and Mike Evans of the Chesapeake Bayhawks trailed with five second place votes each and four and two third place votes respectively.
“It’s pretty unbelievable,” Zink continued when told about the unanimous vote. “A special thanks to all the coaches and GMs. It’s a great honor.”
“There are not enough superlatives to describe Zink,” said Outlaws head coach Jim Stagnitta. “He’s discreet, unassuming, not flashy, but when you look at the numbers his matchups put up against him you know he’s able to neutralize the best players in the world. He’s a consummate professional who juggles work, graduate school and lacrosse and I’ve never been around a defender who does what he does.”
Zink picked up the award for the second time in as many seasons, becoming the second player to ever garnish Defensive Player of the Year in consecutive seasons. The Denver defenseman remains only the sixth player to win the award in MLL’s 13-year history.
A 10-year MLL veteran, Zink led the Outlaws to a perfect 14-0 record, the first undefeated regular season in League history, and Denver’s second consecutive regular season title. Zink started in all 14 games on the back line, recording 21 groundballs, including a season-high four groundballs on two occasions.
Zink was chosen as the fifth overall pick in the 2004 draft, hailing from the University of Maryland. Since his professional debut, Zink has cemented himself as one of the best shut down defenders in the League. Twice this season he has been awarded Warrior Defensive Player of the Week after shutting down the opposing team’s leading scorer. The captain anchored a strong defensive unit which led the League in fewest goals against per game; fewest shots per game, as well as the best penalty kill record.

Denver Outlaws Defender Lee Zink has been named the 2013 Warrior MLL Defensive Player of the Year for the 2nd consecutive year. Hailing from the University of Maryland, the 2004 fifth overall Collegiate Draft pick has consistently established himself as one of the best one-on-one defenders in the League for the past 10 seasons.

Denver Outlaws’ Lee Zink has carved his name into the list of MLL all-time great defensemen. The long-pole captain earned himself the 2012 MLL Defensive Player of the Year, and is a front-runner for this year’s same award.
Hailing from the University of Maryland, the 2004 fifth overall Collegiate Draft pick has consistently established himself as one of the best one-on-one defenders in the League for the past 10 seasons. Seven-year teammate Jesse Schwartzman put it plainly, “It’s pretty simple what makes Lee one of, if not the best defender in the League. It’s his ability to completely dominate his matchup and take the opposing attackman out of the game.”
Standing 6’4″ and handling a 6′ pole, Zink is able to cover a lot of space. His length, and quick feet allow him to stick with anyone, whether it be an explosive, fast player, or a big, and physical dodger. Couple that with sharp game knowledge, smart positioning, and the ability to dictate his opponent, and Zink is a dream teammate.
This season the Denver Outlaw has won Defensive Player of the Week twice, picking up the accolade after shut-down performances against Rochester’s Ned Crotty, and Chesapeake’s John Grant Jr. Throughout the season Zink has matched up with the top offensive players in the League, and has consistently limited them to lower outputs and minimal impact. Just take a look at the chart below to see the breakdown of his impressive numbers. 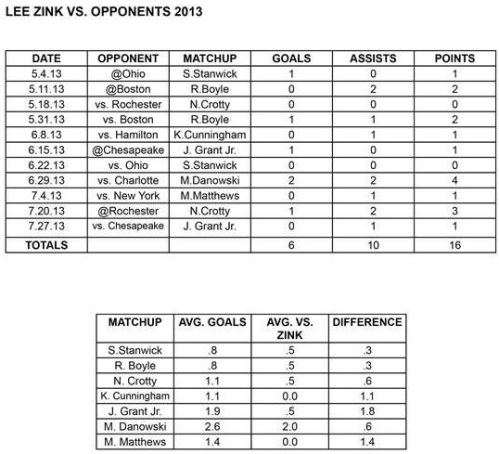 Major League Lacrosse: Denver Outlaws Defenseman Lee Zink Is “Shuttng Down The League’s Top Attackmen”; Six-Time All-Star Is A Major Factor In The Team’s 5-0 Start In 2013

Major League Lacrosse, the premier professional outdoor lacrosse league, announced Tuesday that defenseman Lee Zink of the Denver Outlaws has been named as the 2012 Warrior MLL Defensive Player of the Year, according to MLL Commissioner David Gross. The award was based on the votes submitted by the head coach and general manager of each of the League’s eight teams. “It’s a great honor to be recognized by former players, coaches and GMs. I’ve been really excited about this season; we have a great team and I’m excited about the upcoming weekend,” says Zink. A nine-year MLL veteran, Zink played in 13 games while helping the Denver Outlaws claim their first MLL regular season title since 2009. He recorded 17 ground balls, including a season-high three ground balls in a win over Rochester on June 16.