A relative unknown in lacrosse until recent successes, the University of Denver has produced MLL’s newest and most talented athletes: Mark Matthews (New York Lizards), Cam Flint (Boston Cannons), Chase Carraro (Ohio Machine), and most notably Denver Outlaws attacker Eric Law, have all entered the league and have made immediate impacts for their respective teams.

Despite Law’s successes early on in his professional career, he is not the first Denver graduate that made an immediate impact. In 2012 the Denver Outlaws selected Mark Matthews, a shifty Canadian lefty who made a name for himself with his highlight reel goals. During his time in college, Matthews became Denver’s workhorse leading his team to a pair of NCAA tournament appearances. Now a member of the New York Lizards, Matthews continues to score goals, but maintains that growing the game is the most important goal of all.

The Western part of the United States is historically known for its legendary gold rush, outlaw cowboys, and sharp shooters who became famous for their incredible aim and accuracy. Now, in 2013, there is a new breed of sharpshooters emerging from the Wild West, only now they’re suiting up in MLL uniforms.

Traditionally in the lacrosse community, the schools that produce the majority of MLL talent lie on the east coast of the US. Schools like Syracuse, Johns Hopkins, and Cornell are known for molding their athletes into Major League Lacrosse’s stars of the future, but as the game continues to grow at an exponential rate there is a new lacrosse program churning out some of MLL’s brightest young stars, the University of Denver.

The story for Denver started in 2009 with the arrival of legendary coach, and father of MLL champion goaltender Trevor, Bill Tierney. Despite some serious doubt by lacrosse experts across the country, Tierney left his well-established Princeton program to join the Pioneers, a decision that has grown the game in Colorado, and has ultimately produced some of the professional game’s finest young players.

“So many things drew me to Denver after 22 wonderful years at Princeton,” said Tierney. “A chance to coach with my son, Trevor, a chance to help get a relatively new program, albeit a program that was left in very good shape by Coach [Jamie] Munro, get to the next level in an area where it hadn’t been done before. A chance to be an ambassador for the game as it grows in so many different areas, and a new beginning to recharge my personal ‘professional batteries’.” 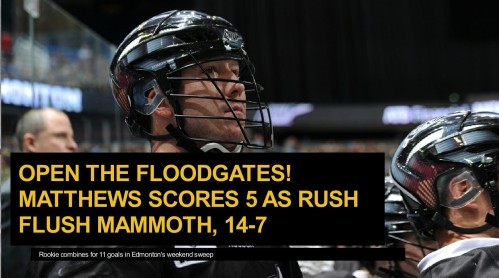 A fourth-quarter scoring run made the difference as the Edmonton Rush (3-4) doubled up the Colorado Mammoth (2-4) by a score of 14-7 before a crowd of 17,059 on Military Appreciation Night at Pepsi Center on Saturday. With the win, Edmonton earned a weekend sweep to rebound from a 1-4 start to the season.
“It was a big weekend for us,” said Rush general manager and head coach Derek Keenan. “We had been playing well but not getting wins and we talked a lot about that this weekend in terms of building a winning culture. Tonight, I really thought we had a hard time finding our legs early, and that happens on a back-to-back, especially coming into here.”
Edmonton rookie Mark Matthews continued his hot streak in his own backyard, carrying the team in both games this weekend. The Denver University graduate finished with five goals and a team-leading six points (5+1), but admitted it was a bit of a shell shock playing for the opposite team in the Mile High City.
“It was weird, definitely weird not wearing a Denver or Colorado jersey but it is what it is,” Matthews said. “We were able to come in and get a ‘W’, which means the world to me right now.”
After a scoreless six and a half minutes, Colorado was first on the board with three goals in a span of 73 seconds. In response, Edmonton would go on a five-goal run that would extend into the second frame. The Mammoth would remain scoreless for nearly 18 minutes of game time before making it a one-goal game, going into the half down 5-4. http://www.edmontonrush.com/page/show/670717-home

Rookie phenom Mark Matthews, the first overall pick in the 2012 NLL Entry Draft, scored six goals and one assist to lead the Edmonton Rush (2-4) to their first home win with a 15-10 victory over the Washington Stealth (4-4) at Rexall Place on Friday night.

The Washington Stealth struggled to score in first and never really got their legs as Edmonton and rookie Mark Matthews ran away with a 15-10 NLL decision before 5,627, Friday at Rexall Place in Edmonton.

The loss dropped the Stealth to 4-4 while Edmonton, now 2-4 with both wins coming against the Stealth, notched their first home win this season.

“We knew exactly what was coming and we let it happen to us,” said Stealth Coach Chris Hall. “We got behind the eight ball early.  We just let them smother us right away.”

Playing without the services of defenders Bill Hostrawser, Jeff Moleski and Tim Henderson, Washington was outshot 61-35 and on offense was never able to challenge an Edmonton squad hungry for their first home win of the season.

Although Edmonton landed the first two goals of the game on scores by Ryan Ward and Matthews, Washington came back with a Brett Bucktooth power play goal at 5:06 and a score by Rhys Duch at 3:44 to knot the game at 2-2.

But after three Edmonton goals followed, two closing out the first and Matthews’ opening score in the second, the Stealth were down 5-2 and had managed just five shots – four coming on a power play attempt early in the first. 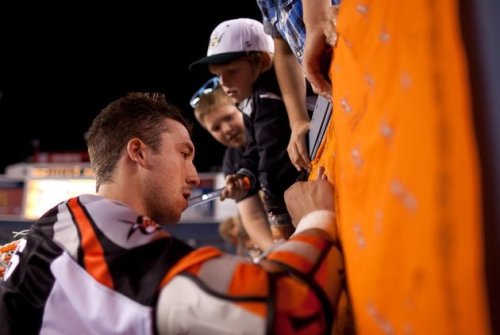 Playing for the Outlaws has allowed him to help establish lacrosse in Denver. When asked if he has become a local hero, he remained modest but did concede the following; “My college teammates and I helped to put Colorado lacrosse on the map, and as you can see we get more and more fans at each Outlaws game. It’s definitely impacted the city and also the state.”

Mark Matthews is having quite a busy year. He started off 2012 as a Pioneer at the University of Denver, where he broke school records for both career points as well as goals. He was drafted to the Denver Outlaws as the fourth overall pick in the 2012 MLL Collegiate Draft and joined them for his rookie MLL season, earning 19 goals and nine assists. Now he is slated to be the first overall pick in the 2012 National Lacrosse League (NLL) Entry Draft. Matthews is an incredibly talented player who is just starting to break into his potential at the professional level.

The Oshawa, Ontario native will most likely be leaving Denver for the winter months and heading back to Canada. The NLL’s Edmonton Rush have already announced that they fully intend to use their first round pick to draft Matthews, which takes a lot of pressure off Matthews’ shoulders this Monday at the NLL Draft in Toronto. He admits that it was nerve racking the past few weeks not knowing where he would end up but now he is able to refocus his attention on starting a new season.

“Now that it’s settled it’s pretty reassuring that I can relax and look at the bigger picture. For instance deciding if I’m going to live there or live at home and fly in. It’s great knowing the coaching staff and some of the players and even some of the guys that might get drafted there.”

If all goes as planned for the Rush come Monday, Matthews will be coached by Derek Keenan who he has already played for with the Whitby Warriors (OLA Junior A Lacrosse League) in 2011. When asked how he felt about the opportunity to play for Coach Keenan again Matthews was very enthusiastic about the partnership.

“It’s great, he’s one of the greatest coaches I’ve ever had and for him to be coaching up in Edmonton is going to make it easier for me to transition. He and I have a really good relationship on and off the floor.”

As to be expected, there is a good amount of transition involved with switching from outdoor field lacrosse to indoor, or box, lacrosse. Matthews said the main challenge is going from playing on an open field to a confined space in a hockey rink. However, the ability to make this change is something Matthews considers an advantage. “Being able to play in such tight quarter puts me at an advantage.  It’s a real different game and for everyone playing both forms of lacrosse it’s pretty tough.”

Once the first NLL game rolls around Matthews will have some big shoes to fill, and those shoes are his own.  In his very first MLL game with the Outlaws he scored a hat trick before halftime, but he insists that he wasn’t planning on that performance then and he won’t be trying to recreate it for his first NLL game.  Simply put by Matthews, “I’m just looking forward to getting back into the box.”