Lacrosse Mourns “One Of Its Own”: Former Naval Academy Men’s Lacrosse Defenseman And Navy SEAL Brendan Looney (’04) Was Killed In Line Of Duty In Afghanistan On Sept. 21 (Video)

Yesterday was one of the most difficult of Richie Meade’s 17-year tenure as Navy men’s lacrosse coach. For the first time since taking over as head coach in 1995, Meade had to deal with the combat death of a former player.

“Brendan Looney was the hardest working member of the team – he had to be to show up his brothers (Steve and Billy),” said classmate Adam Reel, a reserve midfielder that season. “His example of hard work and pushing the team was an instrumental part of the 2004 success.”

It was a long, painful day. The C-5 Galaxy transport plane that was supposed to arrive around 1:30 did not touch down until three hours later. Meade was among an incredible 130 mourners who showed up at Dover to support the Looney family.

Although severely shaken by the news that 2004 graduate Brendan Looney had been killed in a helicopter crash in southern Afghanistan, Meade did not hesitate to make the two-hour drive to Dover Air Force base to represent the Naval Academy lacrosse community when the former standout defenseman’s remains were brought home.

“This has been an extremely tough day for me personally. I have never felt this sad,” Meade said after returning to Annapolis late last night. “This is a real loss in my life because I really, truly cared about Brendan Looney. My father died and that hurt tremendously, but what makes this so hard to handle is that Brendan still had so many great things to do.”

Meade has worked with hundreds of memorable Midshipmen during the more than two decades he has spent as a Navy lacrosse coach. Even among those many top-notch young men, Brendan Looney stood out. 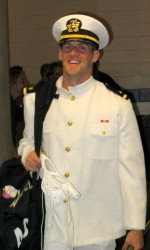 Looney did not play organized lacrosse until he got to the Naval Academy Prep School. The Silver Spring native was a standout football player at DeMatha Catholic and hoped to join his two younger brothers on the lacrosse field as a senior, but could not due to injury.

Initially recruited to Navy as a football player, Looney switched to lacrosse and steadily transformed himself into a valuable player. What Looney lacked in skill, he made up for in toughness. He compensated for minimal lacrosse experience with athleticism and hustle.

Navy enjoyed its greatest season under Meade in 2004, compiling a 15-3 record and reaching the national championship game. Looney wasn’t the star of that team by any means, but he may have been the most respected.

“Brendan was the hardest working member of the team – he had to be to show up his brothers (Steve and Billy),” said classmate Adam Reel, a reserve midfielder that season. “His example of hard work and pushing the team was an instrumental part of the 2004 success.”

Meade took a special liking to Looney because of the sheer will and determination he displayed on the field along with the heart and passion he exuded.

“I cannot overstate the feelings of love and respect that I have toward Brendan Looney,” Meade said. “There are so many little things that made this kid special to me. It was an honor to be part of his life.”

Looney initially got onto the field in the unheralded role of rider – replacing an attackman and furiously chasing the ball to prevent the opponent from clearing. He switched to long stick defensive midfield and was the backup to Thomas “Bucky” Morris in 2004 when Navy made a tremendous postseason run before losing to Syracuse in the Division I final.

“I remember when we played Cornell in the quarterfinals. Brendan got blind-sided around midfield and practically knocked out, but somehow he got up and beat the ball back into the hole,” Meade recalled. “When Brendan came off the field he collapsed because he’d been unable to breathe from the time he got hit.”

Such stories of intensity and effort foretold a career in special warfare. Looney wanted to be a SEAL from the outset, but was initially denied due to color blindness. He was temporarily assigned to assist a SEAL unit and proceeded to out-perform every member of that specially trained, highly skilled maritime force.

“It was like a tryout and Brendan kicked their butts until he was asked to join,” Meade said.

Meade said Looney was nicknamed “the caretaker” because he looked after his five brothers and sisters as well as every single teammate.

“Brendan had no chinks in his armor. As a teammate, as a son, as a brother, he could not have been any better,” Meade said. “What set Brendan apart was that he had a big heart and a great capacity to love. As a coach, you are a teacher. However, there are those rare times when a player teaches you. Brendan was one of those guys.”

It was suggested to Meade that Navy lacrosse should name an award in honor of Looney. It should not honor the best player on the team, but rather someone who displays the selflessness, team spirit and emotional toughness that defined Brendan Looney. Meade understood that was a natural initial reaction, but said he was not inclined to establish such an award.

“I don’t need a name on a trophy to remember that Brendan Looney was a tremendous individual. Our future players will know who Brendan Looney was and what he stood for because I will tell them,” Meade said. “Brendan was everything that I would hope a Naval Academy graduate would be. He certainly was the epitome of what I want a Navy lacrosse player to be.”