Oregon Lacrosse is practicing hard and getting their Freshman class ready for competition as their senior class looks back at their time at Oregon.

Oregon women’s lacrosse head coach Jen Beck announced the release of the 2014 schedule Thursday afternoon. Along with the schedule release, the Ducks will also be wrapping up their exhibition schedule this weekend on the Eastern Seaboard.
The 2014 schedule includes a quartet of first-time opponents in Stetson, Coastal Carolina, Robert Morris and Ohio State. The Ducks will also see some familiar teams in Temple, Cincinnati and Connecticut for their nonconference slate before beginning conference play.
Oregon flies to DeLand, Fla., for its season opener against Stetson on Feb. 2nd and returns to the Sunshine State nine days later for a battle with Coastal Carolina in Jacksonville, Fla., on Feb. 11.
The Ducks take a two-week break before heading to The City of Brotherly Love for a bout against the Owls of Temple on March 1st. The team then drives west to conclude its four-game road swing for a match versus Robert Morris. 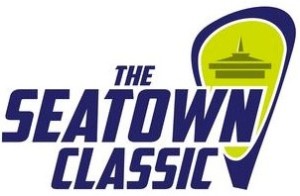 NCAA Division I lacrosse returned to the Seattle area for a second year on Sunday, and this time two Pac-12 schools that showed off the women’s game to local fans with USC and Oregon scrimmaging in a fall-ball friendly at Issaquah High School.

With 13 new freshmen on the roster, USC coach Lindsey Munday, was encouraged by the leadership test for her upper classmen, especially with the play of attack/midfielder Caroline Cordrey and goaltender Liz Schaefer, both sophomores that kept the Ducks at bay throughout most of the scrimmage. 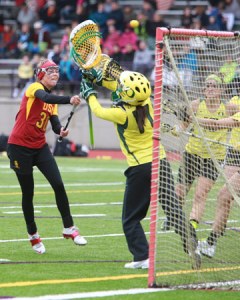 But it was the Southern California’s freshman class that caught the attention of the announced crowd of 1,196 including attacker Kylie Drexel along with midfielders Alex Moore, Michaela Michael and Nina Kelty.

“We’re still young,” said Munday who has 13 newcomers on a squad that finished 8-10 in 2013. “(The game) gave us an opportunity to look at our best combinations for the coming season,” she said. “We saw some nice things.”

The exhibition was a homecoming for USC junior defender and former All-State and All-American player at Eastside Catholic Alex Foreman playing for the first time as a collegian in her home state in front of many of her former high school teammates.

“It’s pretty cool to see the whole (Eastside Catholic) team here. I was excited to be a part of this,” she said.

The University of Oregon women’s lacrosse team opens its 2013-14 campaign with an exhibition against Southern California as part of the Second Annual Seatown Classic in Seattle, Wash. Sunday, Oct. 13, at Issaquah High School Stadium at 1 p.m. The friendly match between the two conference rivals is hosted by the Washington state Chapter of US Lacrosse.

UO comes into the match with a balanced mix of newcomers and veterans with eight freshmen making their Duck debut.

The Women of Troy wrapped up last season 8-10 overall and 5-3 in conference plays, edging out the Ducks for the fourth and final spot at the MPSF Tournament. USC fell to Denver (17-11) in the semi-finals of the tournament. With a fairly young squad the Trojans return their top-four scorers, three of which scored 40-plus goals.

“This is an excellent opportunity for our team to be tested against an excellent conference opponent,” Beck said. “These competitions prepare us for traveling and incorporating our new freshmen into our system.”

“Our expectations are to build excellence and compete at the highest level.  We are shoulder to shoulder with champions at Oregon and strive to do the same in our program.”