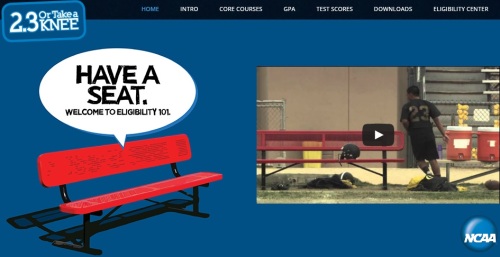 CORE COURSES NCAA member schools require incoming student-athletes to build a foundation of high school courses that will best prepare them for the academic expectations in college. ◾To play Division I sports, you must earn 16 core courses. ◾Ten of them must be completed prior to the seventh semester. Those ten courses are “locked in” and can’t be retaken to improve the grade-point average. ◾Seven of those 10 must be a combination of English, math or natural or physical science that fulfills the overall distribution requirements listed below. ◾If you don’t earn 10 courses before your seventh semester, you are still eligible to practice and receive a scholarship, but you can’t compete. ◾For a complete list of your high school’s NCAA core courses, visit http://www.eligibilitycenter.org. Division I Core Course Requirements: ◾4 years of English. ◾3 years of mathematics (Algebra I or higher). ◾2 years of natural/physical science (1 year of lab if offered by high school). ◾1 year of additional English, mathematics or natural/physical science. ◾2 years of social science. ◾4 years of additional courses (from any area above, foreign language or comparative religion/philosophy). 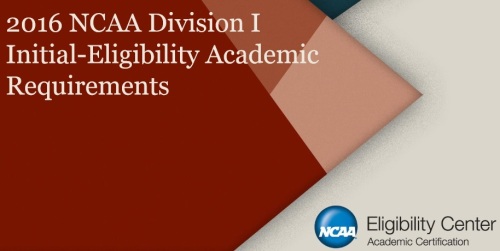 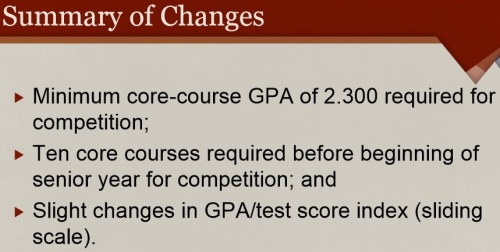 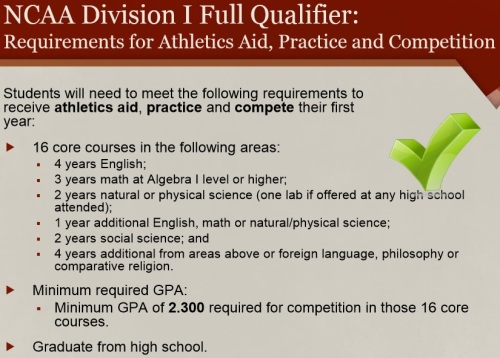 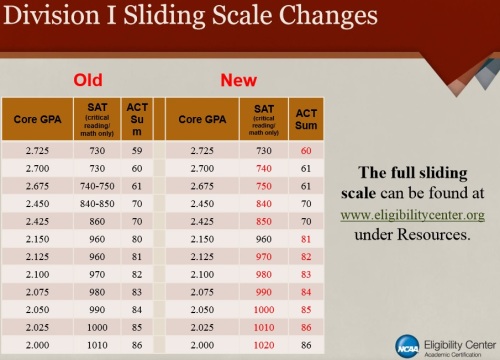 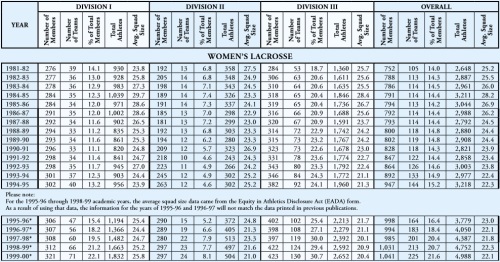 The inaugural University of Colorado lacrosse team arrives on campus Thursday after completing successful senior seasons this spring.
Three of the 19 student-athletes who signed national letters of intent last November earned All-American honors their senior seasons. Three of the student-athletes capped their prep careers by earning Academic All-American honors, and six were named to All-State teams.

Amelia Brown, Hingham, Mass. (Notre Dame Academy) – In her senior season with the Notre Dame Academy lacrosse team, Brown helped lead the squad to the fiercely contended Division I State Championship title, finishing the season with a 24-2 record. Brown won four consecutive Ski East Girls Championships, while also being named to the Boston Globe All-Scholastic Alpine Ski Team all four years. Her accomplishments on the ski slopes and both lacrosse and soccer fields helped her to the Notre Dame Academy Outstanding Athlete Award, given to the school’s top athlete over a four-year career.

Sophia Gambitsky, Wantagh, N.Y. (Wantagh) – Gambitsky was a four-year letter-winner, three-time Scholar Athlete and two-time All-County honoree at Wantagh. In her final season, she was her team’s captain, leading Wantagh to the semi-finals of the Nassau County Class B Championships.

Maddie Hunt, Catonsville, Mass. (Catonsville) – Hunt won back-to-back Maryland 4A Regional Championships in 2012 and 2013. She also received back-to-back All-Division I honors, and was named the Catonsville Co-Athlete of the Year her senior season.

Maddy Krause, Centennial, Colo. (Regis Jesuit) – Krause was a four-year lacrosse letter-winner and three-time first-team All-League selection at Regis Jesuit. In her senior season, Krause took home a conference championship with the Raiders and was named to the All-State defensive team.

Katie Macleay, Sherwood Forest, Md. (Annapolis) – Macleay averaged 5.5 points per game in her four years at Sherwood Forest. In her final season, she led the team in points, scoring 29 goals and contributing 49 assists. She topped her Anne Arundle County record for most assists with 49 in 14 games. She also set an Annapolis high school record for the most assists in a single game, contributing seven against Southern High School. In her final prep game, she had one goal and five assists as the Panthers fell in the second round of playoffs to the eventual Maryland state champions.

Annie Morsches, Columbia City, Ind. (Culver Academies) – Morsches helped the Culver lacrosse team to four consecutive state championship games, taking home the title in 2013. Morsches led the state with 60 goals and ranked second with 54 assists, helping her to first-team All-American titles from both U.S. Lacrosse and Lacrosse Magazine her senior season. The 2013 team captain, she was named a Culver Athlete of the Month and earned back-to-back first-team All-State honors and spots on the State Championship All-Tournament team. She was also named to the All-Tournament team at Western Reserve.

Molly Rovzar, Newport Beach, Calif. (Corona Del Mar) – Rovzar was a two-time first-team All-Pacific Coast League selection and Daily Pilot Athlete of the Week in four seasons at Corona Del Mar. As a senior, Rovzar was named her team’s MVP and an OC Register Player to Watch. She was one of the top 15 athletes at Corona Del Mar to receive the Chamber of Commerce Athlete Award and also received the Gratsinger scholarship, given to the player who best embodies leadership, hard work and community service within the lacrosse community.

Paige Soenksen, Encinitas, Calif. (La Costa Canyon) – Soensken had an outstanding senior season. In her final year, Soenksen and La Costa Canyon claimed C.I.F. Open Division and Avocado League Championships (the team’s second straight league title). Her team’s captain, she was named to the Western Girls Lacrosse All-American and Academic All-American teams (her second national academic honor). The 2013 Union Tribune Player of the Year, she also received her second Avocado League and C.I.F. Player of the Year honors. In her final two seasons, she was named her team’s MVP, first-team All-C.I.F. and an AP Scholar with Distinction. She was also a first-team Avocado League selection as a senior. In her four seasons at La Costa Canyon, she grabbed 132 saves and recorded a .512 save percentage.

Ella Stapp, Denver, Colo. (Mullen) – Stapp played four years of varsity lacrosse at Mullen. She was the team captain her junior and senior seasons, earning first-team Academic All-American honors both years. As a senior, she scored 38 goals and contributed 23 assists, ranking 10th in Colorado, and was named first-team All-State. 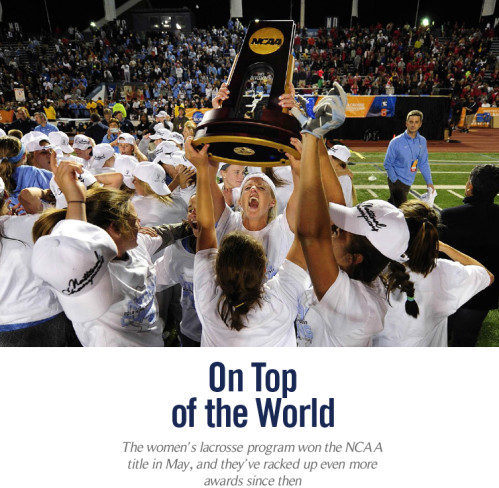 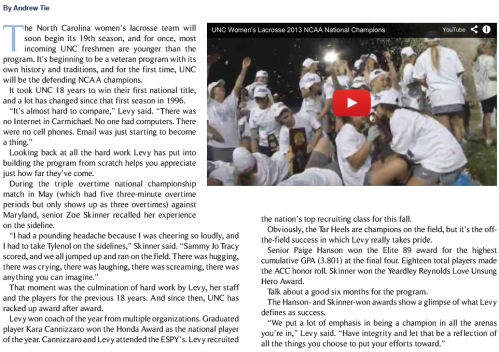 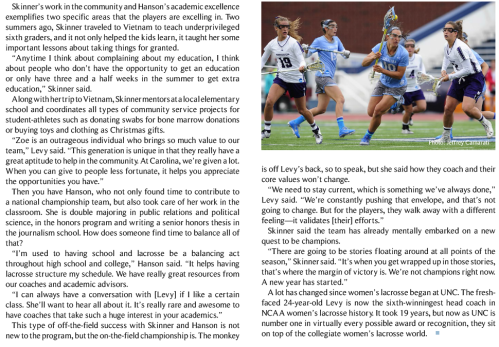 When the Notre Dame men’s lacrosse team held its first official meeting of the 2013-14 campaign last week, the focus wasn’t on the field, rather it was to reemphasize what the program could offer the student-athletes off the field.
“Our mission statement as a program is `We want to provide the best experience in college athletics'”, head coach Kevin Corrigan told the assembled players inside Club Naimoli at Purcell Pavilion.
Part of that experience involves surrounding the student-athletes with a support staff that assists them on many levels during their college careers. Several of those individuals were on hand to discuss how they could best prepare the players for the classroom, competition and their post-college professional lives.
Duke Preston and Stephanie Mola from the Student Welfare and Development office spoke to the team as did Steve Sollmann from Academic Services for Student-Athletes. The players also heard from their athletic trainer Mandy Merritt and strength and conditioning coach Glenn Clarke. The mission for all of those individuals is to help maximize the players’ performance and experience while at Notre Dame.
“It’s a team approach,” Corrigan said. “We have an expert in every field that we’re working in. Anything that’s done at Notre Dame is done with the utmost professionalism and with people who really care not just about what they’re doing, but they care about the people they’re working with and their overall development.

When everybody has that approach within the system and you have that much expert guidance along with the advice and support, it’s all part of us fulfilling the promise that we make to the kids when they come here. 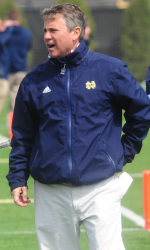 “On the academic side, it’s giving a young man the best advice to make the best decisions that he can and having the support to know he can meet the challenges there.”

The resources provided to the student-athletes may seem like lip service before they get to campus, but it soon becomes evident once they arrive at Notre Dame and see it on a daily basis. “It’s one of the things that I don’t think you understand until you get here and see how many people get put in front of you,” senior defenseman Stephen O’Hara said. “You’re covered from every angle whether it’s academics, nutrition, weight room and the coaches. We all know that everyone is here to help and we just have to utilize them.”

The meeting’s theme continued once Corrigan returned to the front of the room and announced the team will travel to Italy next summer. This will be the latest foreign adventure for the program, which has journeyed to Japan (2010), Czech Republic (2005), England/Ireland/Wales (2001) and Ireland (1995). These trips include playing games and conducting lacrosse clinics and the overall experience is one more example of how Corrigan and his staff try to provide the student-athletes with an enriching career at Notre Dame.

Oregon lacrosse head coach Jen Larsen Beck has announced the signing of goalie Janelle Parker, who will be the eighth incoming freshman for next season. The 2014 class consists of six midfielders and two goalies. Three hail from the state of Maryland, two from Colorado and one each from Massachusetts, Oregon and California.

Janelle Parker, Goalie, Danvers, Mass., Danvers High School/The Williston Northampton School/Synergy Lacrosse Club Parker was a four-year starter in goal in high school and won the team MVP award for three consecutive years at Danvers High School (2008-11). In addition, Parker won three Northeastern Conference (NEC) Championships while at Danvers and was a Salem News first team All-Star player during her tenure. She was NEC Most Valuable Player as both a sophomore and a junior. She also lettered in ice hockey and was a member of the National Honor Society in high school.

Anne Longtain, Midfield, West Linn, Ore., West Linn High School/Oregon Elite Lacrosse ClubLongtain was a Three Rivers Conference top-10 finisher in both draw controls and ground balls as a sophomore (2011) and junior (2012).  She led West Linn to a third-place finish in the 2011 Oregon State Tournament and a runner-up finish in 2012 while earning second team All-League. In 2013, Longtain was a first team All-State selection, an All-American Honorable Mention pick as she led her team to the state championship.

Rachel Steinberg, Midfield, Millersville, Md., Severn School/ Chesapeake Club Lacrosse A four-year letterwinner and starter at Severn High School, Steinberg was an Under Armour All-American and Maximum Exposure All-Star.  She led her team in ground balls, draw controls and caused turnovers last season and is a member of the National Honor Society.

Kathryn Blumhardt, Midfield, Parker, Colo., Regis Jesuit High School/Team 180 Blumhardt was an honorable mention All-League selection as a freshman and led her team in draw controls and ground balls as a sophomore in 2011.  A team captain her junior year, Kathryn received first team All-Conference Accolades after leading Regis Jesuit in ground balls and draw controls.  Last spring she played on the Fellowship of Christian Athletes High School National Team and was a member of the National Honor Society. As a senior, Blumhardt was a first team All-State, first team All-League and an All-City selection as well as an Honorable Mention All-American pick. Additionally, she was an Academic All-American.

Becca Katzen, Goalie, Cockeysville, Md., Dulaney High School/SkyWalkers Lacrosse Club Katzen joins the Oregon lacrosse program after splitting time with two other goalies at Dulaney.  The Cockeysville, Md., native is a member of the National Science Honor Society and the National Art Honor Society. In 2013, Katzen finished with a .590 save percentage.