Sophomore Jill Remenapp (Woodbine, Md.) scored three goals and added four assists to lead the University of Denver women’s lacrosse team to a 13-8 come-from-behind road win over the University of Vermont on Thursday afternoon at Virtue Field.
Sophomore Rachael Dillon (Mount Sinai, N.Y.) and junior Jenn Etzel (Bel Air, Md.) also recorded hat-tricks for the Pioneers (8-1). Dillon did so on just three shots, on Denver’s way to its sixth-straight win.
DU trailed Vermont (4-5) by a score of 6-2 before scoring 11 of the game’s next 12 goals.
“We didn’t get off to the best of starts today,” head coach Liza Kelly said. “With that said, I thought we made some great adjustments in the second half to hold them to two goals. We got great second-half performances from Jenn, Kara and Jill, and I thought Chelsea Cook (Bay Shore, N.Y.) was pretty strong the entire game. Moving forward, we need to focus on putting together a full 60-minute performance.”
Redshirt-senior Kara Secora (Denver, Colo.) found the back of the net twice and added an assist, while senior Mikayla Clark (Eden Prairie, Minn.) added two goals. Cook came up with three groundballs to play a role in Denver’s defensive performance. Redshirt sophomore goalie Hannah Hook (Arnold, Md.) made nine saves to earn the victory.

Megan Takacs scored four goals to set California’s single-season goalscoring record and lead the Golden Bears to a 15-12 nonconference win over Vermont on Thursday afternoon at Virtue Field. The junior attacker now has 53 goals, surpassing the previous record of 49 she shared with former Bear Sarah Wheatley. Cal improved to 8-5, while the Catamounts fell to 8-6.

“One of those things we talked about was redemption,” Cal head coach Ginger Miles said. “We came out to the East Coast to redeem ourselves after those close losses. Like I’ve said in my blog, we’ve been working on building and learning from past mistakes. And now I think we’ve learned how to win those close games.”

University of Denver men’s lacrosse sophomore Cameron Flint (Georgetown, Ontario) scored four goals and had an assist to lead the No. 16/17 Pioneers (1-1) to an 11-6 victory over Vermont (2-1) in the 2011 home opener Sunday afternoon at Peter Barton Lacrosse Stadium.

“Vermont is a good team, but we forced them to settle for some tough shots,” said head coach Bill Tierney

. “We were as good as we can be and as bad as we can be all in one game, but we are starting to come together. Our guys are still getting used to playing with each other and this was a good win for us.”

Junior Alex Demopoulos (Canton, Ohio) grabbed his first goal of the season and had an assist for Denver, while sophomore Eric Law (Centennial, Colo.) tallied his first points of the season with two assists. Freshman Jamie Faus (Lakeville, Conn.) stopped 11 shots and recorded the first win of his college career.

Connor McNamara had two goals for Vermont and Geoff Worley had a goal and an assist. David Barton made 19 saves in the loss.

The fourth and final segment every week will be the Best of U series brought to you by Newman’s Own. Best of U. will focus on imprints our schools and student-athletes are making in the community or in the classroom. This week, we focus on the Catamount Classic, a men’s lacrosse tournament put on by University of Vermont to benefit testicular cancer research. 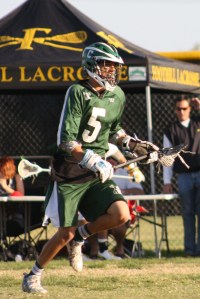 The University of Vermont men’s lacrosse program will add nine newcomers for the 2011 season. Head coach Ryan Curtis made the announcement today.

“We are very excited to announce our fourth recruiting class; the class of 2014,” Curtis said. “This is an impressive group of young men who have had great success on and off the field. Each member of this class will have the potential to make an immediate impact on this program and add quality depth to our team.”

“We’re still having a slow start,” Cal head coach Theresa Sherry. “We are plagued by injuries right now, but that shouldn’t be a factor in the first five minutes of the game. We’re trying to make changes at practice. But the strange thing is we look really good at practice and then we come out here and we can’t seem to get up for these first few minutes of the game. It’s really tough, especially when we’re short to come back. We just don’t have the legs to come back.”

California lost to Vermont, 15-11, in a nonconference game on a cold, overcast Saturday afternoon at Memorial Stadium in Berkeley. Vermont bolted out to a 5-0 lead, and the Golden Bears could not recover. Cal junior attacker Catie O’Mahoney scored a hat trick in her first start of the season and senior attacker Sam Price added four assists for the Bears, whose record fell to 4-5. The Catamounts’ record improved to 4-3.

The Catamounts aided their quick start by winning the first four and five of the first six draw controls. This is the second straight game in which Cal fell behind quickly, including an 8-1 setback in the early going against William and Mary on March 11 in Berkeley.

Against Vermont, Cal surrendered two goals in less than two minutes, as Pfohl scored the first at 1:03 and Sara Buxton struck at 1:27. A pair of Sarah DeStefano goals sandwiched around a Millar strike gave the Catamounts its 5-0 lead at 6:44.

California (4-3, 2-0 MPSF) continues its homestand with a pair of nonconference games this week.

The Golden Bears take on William and Mary at 3 p.m. on Wednesday, March 11, and then play Vermont for the first time at noon on Saturday, March 14, at Memorial Stadium. Cal has a 1-2 record in the all-time series with William and Mary.

Almost half way through the season, Cal currently has the second-best record in the MPSF to Stanford, which is 4-0 in conference and 6-2 overall.

Senior midfielder Clare Dennis (12 goals, 1 assist), who scored one goal against the Cardinal, is tied with junior attacker Mary Zulty (11 goals, 2 assists) as William and Mary’s leading scorer; each has 13 points. Sophomore goalkeeper Emily Geary, who made seven saves in almost 49 minutes against Stanford, has a 12.58 GAA in five starts.

Christine Halfpenny, the 2008 Colonial Athletic Conference Coach of the Year, is in her third year as William and Mary’s head coach.

Jen Johnson is in her fifth year as Vermont’s head coach. One of her assistant coaches is former Cal assistant Jen Nardi.

Cal hits the road to play Notre Dame at 10 a.m. PT on Sunday, March 22, in Sound Bend, Ind.
The Catamounts have a 2-3 record prior to their Wednesday, March 11, game at UC Davis. That game is scheduled to start at 7 p.m. Their last game was a 10-6 loss against Oregon, another MPSF team, on March 8 in Eugene, Ore.
The Tribe has a 2-3 record after losing at Stanford, 18-9, on March 8. Sophomore midfielder Grace Golden led the Tribe with three goals, one assist and two draw controls.
California junior midfielder Alex Tickner earned her second consecutive Mountain Pacific Sports Federation Player of the Week honor, the conference announced on Monday. Tickner scored a career high five goals and five points in the Golden Bears’ 13-6 MPSF win over UC Davis on March 8 at Memorial Stadium. The Rockville, Md., product garnered the same honor last week after scoring a hat trick in Cal’s 8-6 victory over Temple on March 1.