University of Denver junior Jenn Etzel (Bel Air, Md.) buried a pass from sophomore Jill Remenapp (Woodbine, Md.) with just six seconds on the clock to break a tie and give the Pioneers a 10-9 win over Vanderbilt in the 2013 season opener on Saturday afternoon.
Remenapp had seven points in the game off two goals and five assists for the Pioneers (1-0), while Etzel added an additional goal and an assist in the game. Redshirt senior Kara Secora (Denver, Colo.) recorded a hat trick in the game.
“The game was a bit sloppy at times, but it is a great way to start the season,” head coach Liza Kelly said. “We saw incredible plays from a lot of individuals, and we are looking forward to our next opponent.”
Vanderbilt (0-1) jumped to a three-goal lead in the first five minutes. Denver stormed back and tied the game four times but did not take a lead until the final shot of the game.
Redshirt sophomore goalie Hannah Hook (Arnold, Md.) made eight saves to earn the win in her first career start.
The Pioneers remain on the road for a pair of games next weekend, playing at George Washington on Feb. 22 at 1:30 p.m. MT and Delaware on Feb. 24 at 10 a.m. MT. Denver opens the home schedule on Saturday, March 2, when Louisville visits Peter Barton Lacrosse Stadium.

Trailing 7-2 at the half, the No. 8/9 University of Notre Dame women’s lacrosse team exploded for 10 second half goals, while limiting Stanford to just three, to spoil the Cardinal’ upset bid in the season-opener for both teams Saturday afternoon at Laird Q. Cagan Stadium at Maloney Field. With the win the Irish opens the year 1-0 for the 15th time in 17 seasons.
“We made a lot of changes at halftime and got to playing like we had been playing in practice,” said head coach Christine Halfpenny. Once we made the adjustments at halftime we got on a roll. We played a very solid Stanford team that has a great coach and some talented players. Despite getting down early our team never gave up. They had great belief and we had incredible contributions from so many players, starters and reserves. It wasn’t pretty, but it feels good to get a win in game one.”
Down 7-2, the Irish went to work in the second half, scoring six of the first seven goals of the second half, including five in a row from the 23:00 mark to 17:31 to tie the score at eight. The tie was the first since the score was 1-1 with 19:27 left in the first half. Sophomore Lauren Sullivan scored a pair of goals in under a minute, putting one in at 18:22 unassisted and another at 17:31 off a pass from Kaitlyn Brosco.
From there the two teams battled back and forth as each tallied goals to push the score to 10 all. Stanford took a 9-8 lead at 16:07 after a goal from Lucy Dikeou. Notre Dame answered just a minute and a half later as Brosco scored off a pass from junior Lindsay Powell. After Powell gave the Irish a 10-9 lead at 11:32, the Cardinal responded at 9:06 with the equalizer off the stick of Rachel Ozer.

USC junior Elizabeth Eddy has doubled down on her athletic commitments and joined the women’s lacrosse team to go along with continuing to play women’s soccer.  While Eddy is developing her stick skills, head coach Lindsey Munday is thrilled to incorporate her athleticism and leadership into the team.

NCAA Lacrosse: Stanford Women’s Lacrosse Looks To Reclaim MPSF Championship And Return To NCAA Tournament In 2013 As It Returns 16 Players

As the Stanford lacrosse team prepares to open the season, it returns to the field with a sense of motivation, driven by the desire to reclaim its position atop the Mountain Pacific Sports Federation and earn a spot in the NCAA Tournament. The Cardinal dealt with a 2012 season filled with challenges. The team competed against one of the most difficult non conference schedules in the nation, playing its first five games against top-20 opponents, and dealt with injuries to key players while relying on a talented but youthful group of players to fill the gaps.

Stanford finished 8-10 and, for the first time in eight years, was not the MPSF champion, falling to Oregon in the conference title match, 13-10.

Don’t expect Stanford to dwell on the past. The adversity produced a 2013 team that is loaded with experience and prepared to prove itself as one of the nation’s elite teams.

“Our team is really excited about the season ahead, we did not accomplish our goals that season and that has left us very hungry for the start of a new season,” said head coach Amy Bokker, who enters her fifth season with the Cardinal. “An MPSF championship is a goal of ours this year. Also, with the expansion of the NCAA bracket, that’s something we really want to focus on, getting back in the NCAA tournament.”

“Our two seniors bring a lot to the table as far as being vocal and helping organize on the field,” Bokker said. “Both of our seniors are even-keel and have balanced personalities. That’s something our team really needs in times of adversity on the field, in times of high-pressure situations.”

Kim missed seven games for Stanford in 2012 but managed to record 25 goals in just 11 games.

The Cardinal also boasts a talented junior class to help lead a team that includes 18 underclassmen.

“Our junior class is strong and many of them have been involved since their freshman year as far as playing time is involved,” said Bokker. “They’re going to be a huge help to our two seniors.”

“We want to challenge ourselves with a tough schedule,” said Bokker. “Opening with Notre Dame, we’ll have a true test right away. We’re really putting ourselves up against a high level of competition. It’ll give us a chance to see where we are and what it takes to compete at that level if we do get into the NCAA Tournament.”

Stanford also will have to navigate an increasingly talented and growing MPSF that adds USC this season.

Stanford will get its chance to avenge its MPSF championship loss when it hosts Oregon toward the end of its regular season on April 19, in a match that will likely have seeding implications.

As the season approaches, Bokker is confident in her team’s preparation and believes in the team’s potential for a successful season.

“I really praise the work ethic of our team in general,” Bokker said. “They’re on a mission and have really taken it upon themselves to bring the energy and have the discipline to do what it takes to be a championship team. Our team wants to win a national championship. That’s a goal we have for ourselves, along with a conference championship.

“Our team puts high standards on itself but I feel those can be accomplished if we stay focused.”

The attack will be led by junior Rachel Ozer and sophomores Emily Newstrom, Kyle Fraser and Meredith Kalinowski. Ozer played in just five matches in 2012 but is expected to be a major contributor this season after recording 15 goals and nine assists in a full 2011.

Newstrom, Fraser and Kalinowski all finished in the top 10 in points for Stanford as freshmen last season. Newstrom led the group and was second overall for the Cardinal scoring 28 goals with four assists for a total of 32 points. Fraser (20-6) and Kalinowski (5-0) posted 26 and 5 points, respectively.

Stanford will run two lines at midfield. However, Bokker said the exact pairings have yet to be determined. All-MPSF selections Anna Kim and Hannah Farr will lead the talented and deep group.

Kim missed seven games of the 2012 season but managed to finish third on the team in points racking up 25 goals and adding two assists in just 11 games. Farr had an outstanding freshman campaign, recording 23 goals and four assists.

The backline will likely be headed by seniors Elizabeth Adam and Carolyn Bradley. They will be joined by junior Megan Lerner and sophomore Rachel Kalick. Freshmen Hannah Smith, Cyerra Holmes and Callie Farmakis are expected to contribute as well.

All-MPSF selection Lyndsey Munoz will guard the cage for the majority of Stanford’s season. The junior has been solid for the Cardinal in net and, according to Bokker, has improved out of the net as well.

“Lyndsey has done a great job as our stopper,” Bokker said. “She has really worked hard on her out-of-the-cage play, trying to mix it up from the defensive perspective.

Freshman Katie Wiseman had a strong showing in the preseason and provides the Cardinal with reliable depth.

Stanford opens its season at home against No. 9 Notre Dame at 3 p.m. on Saturday, Feb. 16 at Laird Q. Cagan Stadium. Admission to all regular season home matches is free.

Marquette’s women’s lacrosse team will face its first challenges on the field, as they begin their inaugural 2013 season – Alex Winey, Emma Salter and coach Meredith Black provide insight about what’s ahead for the Golden Eagles. 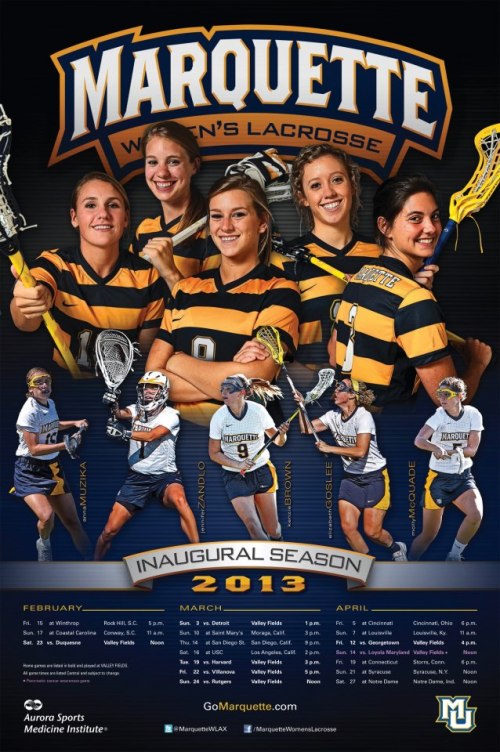